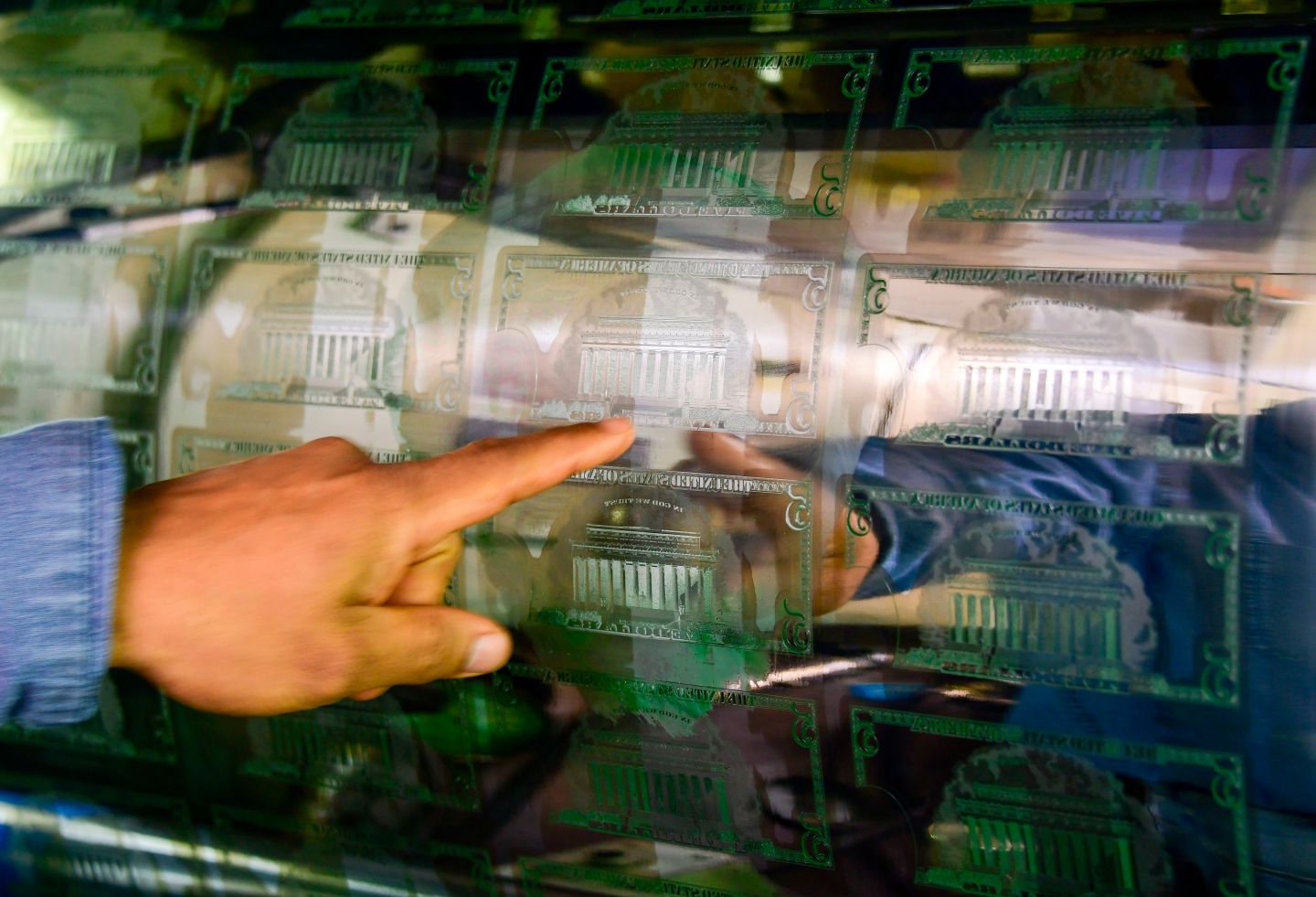 An employee points to the inked printing plate of a sheet of 5 USD notes at the US Treasury's Bureau of Engraving and Printing in Washington, DC July 20, 2018. - The dollar slid against the euro and pound on Friday, July 20, 2018, as US President Donald Trump adopted an aggressive posture on trade and foreign exchange, stoking talk of a currency war in addition to a trade war. (Photo by Eva HAMBACH / AFP) (Photo credit should read EVA HAMBACH/AFP/Getty Images)
Eva Hambach—AFP/Getty Images

The currency war has arrived.

So say some of the best and brightest in the $5.1 trillion-per-day foreign-exchange market. U.S. President Donald Trump on Friday accused China and the European Union of “manipulating their currencies and interest rates lower.” The comments came after the yuan plunged to its lowest level in a year, with little sign of China’s central bank intervening to stem the slide. They also follow a decline in the euro this year and add to the calculus that European Central Bank policy makers might need to consider when they meet next week.

As the world’s largest economies open up a new front in their increasingly acrimonious game of brinkmanship, the consequences could be dire — and ripple far beyond the U.S. and Chinese currencies. Everything from equities to oil to emerging-market assets are in danger of becoming collateral damage as the current global financial order is assailed from Beijing to Washington.

“The real risk is that we have broad-based unravelling of global trade and currency cooperation, and that is not going to be pretty,” said Jens Nordvig, Wall Street’s top-ranked currency strategist for five years running before founding Exante Data LLC in 2016. Trump’s recent rhetoric “is certainly shifting this from a trade war to a currency war.”

China’s shock devaluation of the yuan in 2015 provides a good template for what the contagion might look like, according to Robin Brooks, the chief economist at the Institute of International Finance and the former head currency strategist at Goldman Sachs Group Inc. Risk assets and oil prices would likely tumble as worries about growth arise, hitting currencies of commodity-exporting countries particularly hard — namely, the Russian ruble, Colombian peso and Malaysian ringgit — before taking down the rest of Asia.

Whether the People’s Bank of China attempts to anchor the dollar-yuan exchange rate near 6.80 to avoid further escalation is key, according to Nordvig. He says ECB President Mario Draghi may elect to step into the fray at the central bank’s July 26 policy meeting, given American attempts to talk the dollar down in January were extremely unpopular in Frankfurt.

The Bloomberg Dollar Spot Index fell as much as 0.8 percent Friday, the most since March. The euro ended the day up 0.7 percent at $1.1724, while the yen was almost 1 percent stronger.

Treasury Secretary Steven Mnuchin said Friday that the U.S. is closely monitoring whether China has manipulated its FX rate, according to Reuters.

“There’s no question that the weakening of the currency creates an unfair advantage for them,” Mnuchin said. “We’re going to very carefully review whether they have manipulated the currency.”

The Treasury’s next semi-annual foreign-exchange policy report — the government’s formal channel to impose the manipulator designation — is expected in October.

The Department in its last report in April refrained from branding China with the label, but stepped up criticism of the Asian nation’s lack of progress in rectifying its trade imbalance with the U.S.

For a QuickTake explainer on currency wars, click here

“The exchange rate is one of many instruments China could use” to counter U.S. tariffs, Joseph Stiglitz, the Nobel Prize-winning Columbia University economist and former adviser to President Bill Clinton, said in a July 17 interview. “They would make a big effort to say what they are doing is not motivated by that,” he added. “We won’t be able to clearly tell. We don’t usually know the extent of intervention.”

The greenback will likely continue to suffer as investors heed Trump and back out of long dollar wagers, according to Shahab Jalinoos, Credit Suisse Group AG’s global head of FX trading strategy.

Hedge funds and other speculators are the most bullish on the currency since February 2017, according to data released Friday from the Commodity Futures Trading Commission that tracks positions through the week ended July 17.

“It has now been virtually defined as a currency war by the U.S. president, given that he explicitly suggested foreign countries are manipulating exchange rates for competitive purposes,” Jalinoos said. “The barrage of commentary will likely force the market to scale back long dollar positions.”