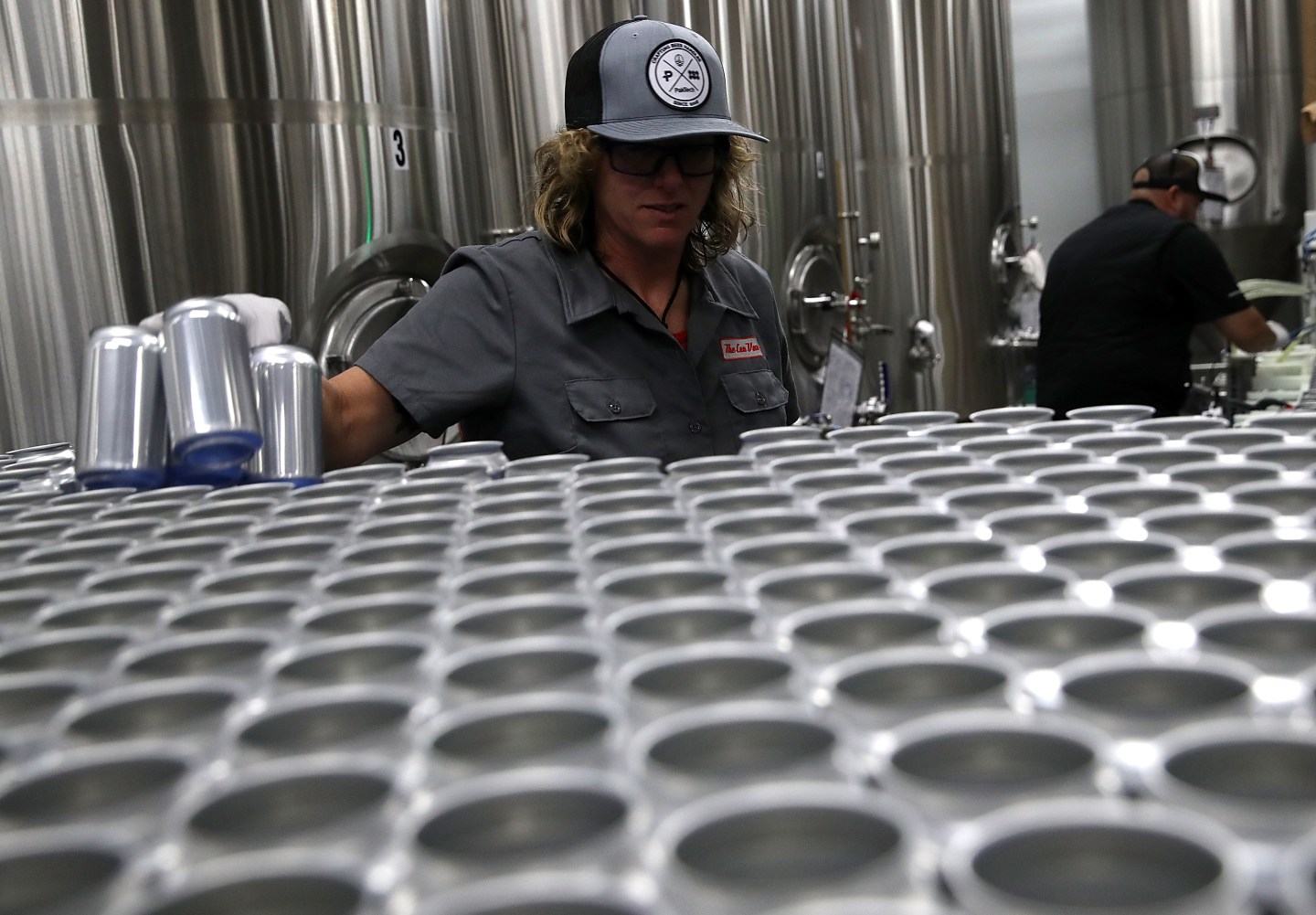 SAN CARLOS, CA - JUNE 06: Kathryn Fisher with Can Van, a mobile canning company, places empty aluminum cans on a conveyor belt to be filled with beer at Devil's Canyon Brewery on June 6, 2018 in San Carlos, California. New tariffs imposed by U.S. president Donald Trump on aluminum from Canada, Mexico and the European Union could cause the price of canned beer and soft drinks to rise. The 10 percent tariff could raise the price of a six-pack of beer by one dollar. (Photo by Justin Sullivan/Getty Images)
Justin Sullivan—Getty Images

U.S. aluminum tariffs that were meant to protect the industry from foreign competitors are instead taking a bite out of the earnings of the nation’s largest producer.

Alcoa Corp. lowered its 2018 profit projection as tariffs on imported aluminum present what Chief Executive Officer Roy Harvey is calling a “significant” headwind. The manufacturer has been hit with $15 million so far on material it produced mostly in Canada and shipped to the U.S. The company also cited higher energy costs and lower aluminum prices for the cut.

The forecast adds to concerns for commodity investors over the potential impact of the tariffs, with metal prices and producer shares languishing amid growing concern that a trade war could hamper economic growth. Harvey zeroed in on the levies slapped on shipments from Canada, where Alcoa was expected to make 28 percent of its primary aluminum this year, according to Bloomberg Intelligence.

“Everyone assumed as did we that there would be an exception in place for Canadian production, so that has turned out not to be the case and that is a pretty significant impact for us,” Harvey said in a phone interview.

Adjusted earnings before interest, tax, depreciation and amortization is forecast to be $3 billion to $3.2 billion, down from a previous estimate of $3.5 billion to $3.7 billion, Alcoa said in a statement Wednesday.

Harvey said that while demand remains robust, there are concerns that industrial customers could eventually move operations outside of the U.S. so they can buy metal that’s not subject to the duties.

At the same time, the Pittsburgh-based manufacturer reported higher-than-expected sales and earnings for the second quarter.

“Uncertainty continues to exist in the global supply chain due to U.S. tariffs and ongoing alumina supply disruptions in the Atlantic region,” the company said in the statement.

Aluminum has slipped about 25 percent from an almost seven-year high reached in April in the wake of U.S. sanctions on Russian producer United Co. Rusal.

Alcoa fell 0.9 percent at 7:10 p.m. after the close of regular trading in New York. The shares declined 11 percent this year through the close. Century Aluminum Co., the second-biggest U.S. producer, fell 1.6 percent in late trading.

The company also said it sees a deeper global production shortage in the metal this year as it pared its outlook for excess supply coming out of China.

Demand will exceed supply by 1.1 million to 1.5 million metric tons, Alcoa said Wednesday in its earnings presentation. That compares with an April forecast for a deficit of 600,000 to 1 million tons.