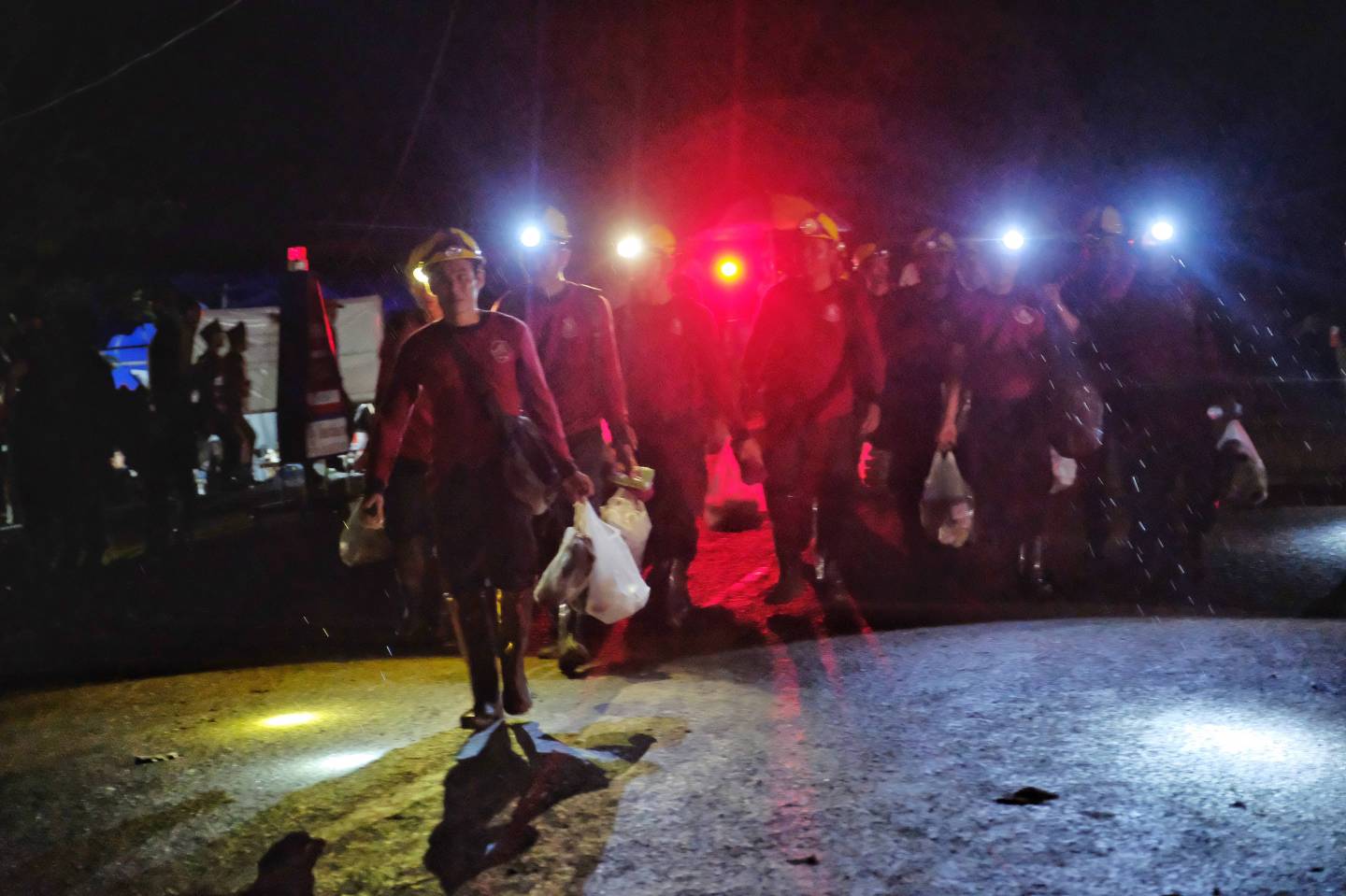 CHIANG RAI, THAILAND - JULY 8: Military personnels, rescue workers and volunteers head out from Tham Luang Nang Non cave after ambulances transported a group of boys rescued from the cave on July 8, 2018 in Chiang Rai, Thailand. Divers began an effort to pull the 12 boys and their soccer coach on Sunday morning after they were found alive in the cave at northern Thailand. Videos released by the Thai Navy SEAL shows the boys, aged 11 to 16, and their 25-year-old coach are in good health in Tham Luang Nang Non cave and the challenge now will be to extract the party safely. (Photo by Linh Pham/Getty Images)
Linh Pham—Getty Images

Four boys out of 12 trapped in a flooded cave in Thailand with their soccer coach have been freed as part of an ongoing rescue mission that started Sunday after the group was initially found July 2—about a week after the search for them began.

Rescuers have been working to lower the water level in the cave to prepare for an hours-long mission to retrieve the boys, ages 11 to 16, most of whom can’t swim.

The rescue has received international support. Operation chief Narongsak Osottanakorn said a total of 90 divers would be involved in the rescue mission, with 40 divers from Thailand, and 50 from abroad, including the United States, Australia, China, and Europe, according to the Washington Post.

“Clearly there is a huge risk of someone panicking if they are not used to the diving environment,” Tony Haigh, a spokesman for the British Cave Rescue Council, which had two divers that found the boys, told the Post. “It happens to adults in the open water, never mind children in a dark cave.”

In a tweet Sunday morning, U.S. President Donald Trump said, “The U.S. is working very closely with the Government of Thailand to help get all of the children out of the cave and to safety.”

The U.S. is working very closely with the Government of Thailand to help get all of the children out of the cave and to safety. Very brave and talented people!

Billionaire tech developer Elon Musk had also offered to provide assistance, in the form of a “kid-size submarine,” which could arrive in Thailand early Monday, local time.

As of Sunday, four boys were confirmed rescued from the cave, before the mission was paused, according to the BBC. All four boys were said to be in “perfect” condition, and safely transported to a hospital. The rescue efforts were put on hold overnight Sunday as rain started “bucketing down” over the cave. The pause will give divers time to prepare gear, including masks and refilling air tanks, for the next round of rescue efforts.

Some took time on Sunday to pay tribute to Saman Gunan, a Thai Navy SEAL who died while trying to ensure the boys had enough oxygen.