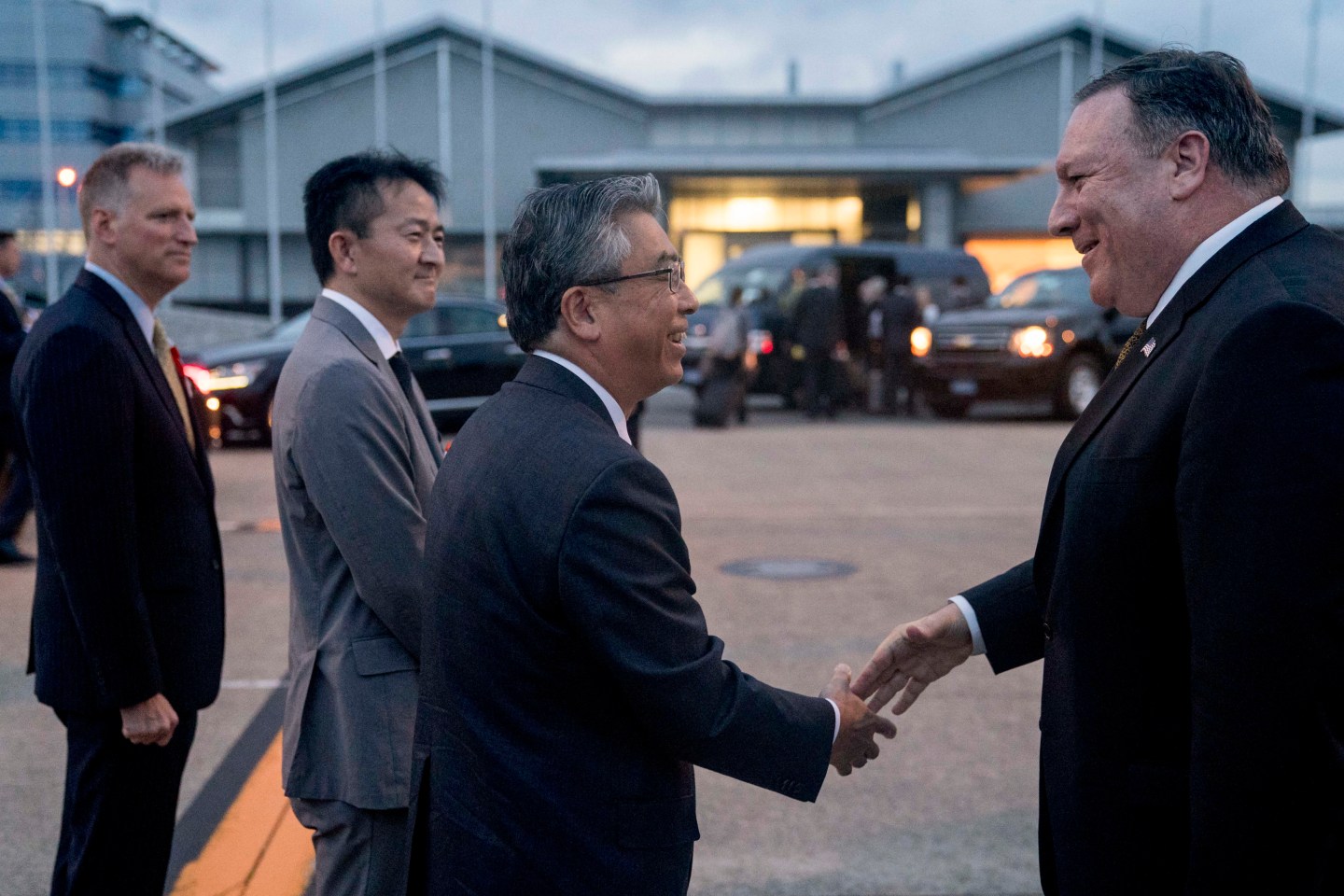 US Secretary of State Mike Pompeo is greeted by from by US Embassy Deputy Chief of Mission Joseph Young, Japan Ministry of Foreign Affairs, director of North America Makoto Hayashi and Japans Ambassador to the US Shinsuke Sugiyama, as he arrives at Haneda Airport in Tokyo on July 7, 2018. - Pompeo insisted that two days of talks with his North Korean counterpart on dismantling Pyongyang's nuclear arsenal had been "very productive". (Photo by Andrew Harnik / POOL / AFP) (Photo credit should read ANDREW HARNIK/AFP/Getty Images)
Andrew Harinik—AFP/Getty Images

North Korea slammed the U.S. position on denuclearization during two days of meetings with Mike Pompeo as “gangster-like,” hours after the secretary of state cited “good-faith negotiations” with his counterparts in Pyongyang.

A North Korean Foreign Ministry spokesman, in a lengthy English-language statement released by the state media outlet Korea Central News Agency, said the U.S. side had created “trouble” by putting forward the same kind of proposals that past administrations had sought.

“The U.S. side came up only with its unilateral and gangster-like demand for denuclearization,” the statement said, adding that the U.S. call for “complete, verifiable, irreversible denuclearization,” or CVID, runs “counter to the spirit of the Singapore summit.”

Trust between the two sides was now at a “dangerous” stage that could lead the country to falter in its commitment to give up nuclear weapons, KCNA said — adding that North Korea still has faith in President Donald Trump.

The assessment, so different to one Pompeo had offered reporters earlier, suggested — as Korea analysts had feared — that the two sides remain far apart on their goals for talks on denuclearization despite Pompeo’s past comments and Trump’s frequent upbeat remarks after his June meeting with North Korean leader Kim Jong Un in Singapore.

The top U.S. diplomat has said that Kim had repeatedly expressed in private conversations his desire to give up nuclear weapons for good.

The statement came hours after Pompeo departed following meetings led by Kim Yong Chol, a senior aide to Kim. Pompeo is spending the night in Tokyo, where he’ll brief officials from Japan and South Korea on Sunday before flying to Vietnam.

The secretary was under pressure to deliver a more concrete disarmament plan to flesh out the two leaders’ vague, 1-1/2 page document from the Singapore meeting, which provided no timetable for dismantling North Korea’s nuclear arsenal.

Before he left Pyongyang, Pompeo said U.S. negotiators and their North Korean counterparts discussed the idea of a full declaration of North Korean weapons of mass destruction stockpiles, and setting a timeline for giving them up.

“These are complicated issues, but we made progress on almost all of the central issues,’’ Pompeo told reporters on the tarmac, following his third visit to North Korea. “We had productive, good-faith negotiations.”

Pompeo said North Korea, in “many hours of talks’’ at a walled-off guest-house outside downtown Pyongyang, reiterated its commitment to denuclearization. Kim Yong Chol ended Pompeo’s visit on a positive note, telling the top U.S. diplomat just before he boarded his plane, “We will produce an outcome, results.’’

For now, those results must remain in the future, and the commentary from state media underscored how daunting the task remains in achieving them. The comments are also a setback for Pompeo, who had hoped that he could hand off future negotiations to working groups settled on by the two sides at the latest meeting.

After his Asia swing, Pompeo heads for other thorny U.S. foreign-policy events — the North Atlantic Treaty Organization summit in Brussels starting on July 11, and Trump’s meeting with Russian President Vladimir Putin in Helsinki on July 16.

Despite Pompeo’s positive depiction of the events, signs had emerged earlier that things weren’t going as well as hoped. It was unclear if Pompeo met this time with Kim Jong Un, as he had on his previous two trips to North Korea’s capital. And earlier in the day, he had a curiously testy exchange with Kim Yong Chol, who mused that the secretary may not have slept well the night before because of the important issues they had discussed.

Pompeo could point to no concrete achievement from the talks, aside from an agreement for the two sides to meet again on or around July 12 in Panmunjom, the border village between the two Koreas, to discuss returning the remains of U.S. soldiers from the 1950-1953 Korean War.

Pompeo said North Korea had confirmed it intended to destroy a missile-engine testing facility and the two sides discussed the “modalities’’ of what that would look like. The countries also agreed to create working groups that will be overseen by Sung Kim, the U.S. ambassador to the Philippines who’s handled some lower-level discussions, to work out what State Department spokeswoman called the “nitty gritty details’’ of future talks.

All along, however, experts had wondered how the U.S. and North Korea would bridge differences that have bedeviled their talks for decades and only seemed exacerbated under Trump. The U.S. has insisted that North Korea give up its nuclear weapons for good before receiving relief from sanctions. North Korea, meanwhile, had indicated after the Singapore summit that the two sides had agreed to a synchronized, step-by-step approach by the two sides.

In the statement calling the U.S. stance “regrettable,” the North Korean Foreign Ministry spokesman quoted by KCNA said the U.S. is unilaterally demanding denuclearization and trying to postpone discussion of declaring an end to the Korean War.

It also derided the “great publicity” made the U.S. about the “suspension of one or two joint military exercises” with South Korea’s forces. “Suspension of one action called exercises is a highly reversible step which can be resumed anytime at any moment,” versus the U.S. demand for an “irreversible step” by North Korea on its nuclear testing grounds, the statement said.

A failure in the talks would amount to an embarrassment for Pompeo, whom Trump has assigned to lead the negotiations and who’d said repeatedly that Kim Jong Un was ready to commit to something no North Korean government had delivered on in decades.

It would be worse for Trump himself. Since returning from Singapore, Trump has declared the North Korean nuclear threat over, even though the country’s leaders promised nothing in a joint declaration signed by Kim and Trump that they hadn’t agreed to many times before.

While Pompeo hailed progress at the latest talks, the KCNA commentary and the results he announced on Saturday will only add to unease that North Korea’s commitment to denuclearization is a facade, and it has no intention of giving up its weapons.

Critics and analysts who study North Korea have argued that the country’s commitment to the “complete denuclearization of the Korean Peninsula,’’ as spelled out in the joint declaration from the Singapore summit, doesn’t go as far as other promises to give up its nuclear weapons that North Korea had made — and reneged upon — many times in the past.

In recent days, intelligence reports have shown that North Korea is continuing work at a key rocket-engine facility. The U.S. has also stopped using the catchphrase “complete, verifiable, irreversible denuclearization,’’ which it had insisted upon happening before North Korea gets any relief from a crippling sanctions regime, before Pompeo apparently brought it up again during the latest talks.

That change raised suspicion that the U.S. was softening its demands for the country, an argument that State Department spokeswoman Heather Nauert had insisted on Friday wasn’t true.

Nauert didn’t immediately respond to a request for comment about North Korea’s latest statement. Trump, spending a long weekend at his golf course in Bedminster, New Jersey, was also silent on the developments on Twitter.

Pompeo has bristled at the idea that the Singapore declaration was an empty promise, saying repeatedly that Kim Jong Un had assured him in private conversations he was ready to give up his nuclear arms.

But fissures have emerged in the U.S. stance. Last week, Trump’s national security adviser John Bolton said North Korea could be expected to carry out the “bulk’’ of denuclearization within a year. Yet Pompeo himself had earlier said he envisioned that occurring in about two 1/2 years, by the end of Trump’s term. Nauert later said the U.S. wasn’t putting a timeline on the process.

Before events in Pyongyang had concluded, Nauert told reporters that Pompeo had been “very firm” in insisting that North Korea fulfills its commitment to “complete denuclearization.” She said the two sides had also discussed the return of the remains of U.S. troops killed during the Korean War.

Pompeo’s visit was the highest level meeting between U.S. and North Korean officials since Trump and Kim held their unprecedented summit.

“Trump tried to sell this as a quickly achievable deal to denuclearize and now Pompeo and team are tasked with the impossible task of pushing forward on denuclearization without a shared understanding with Pyongyang,” said Stephen Nagy, a senior associate professor at the International Christian University in Tokyo.