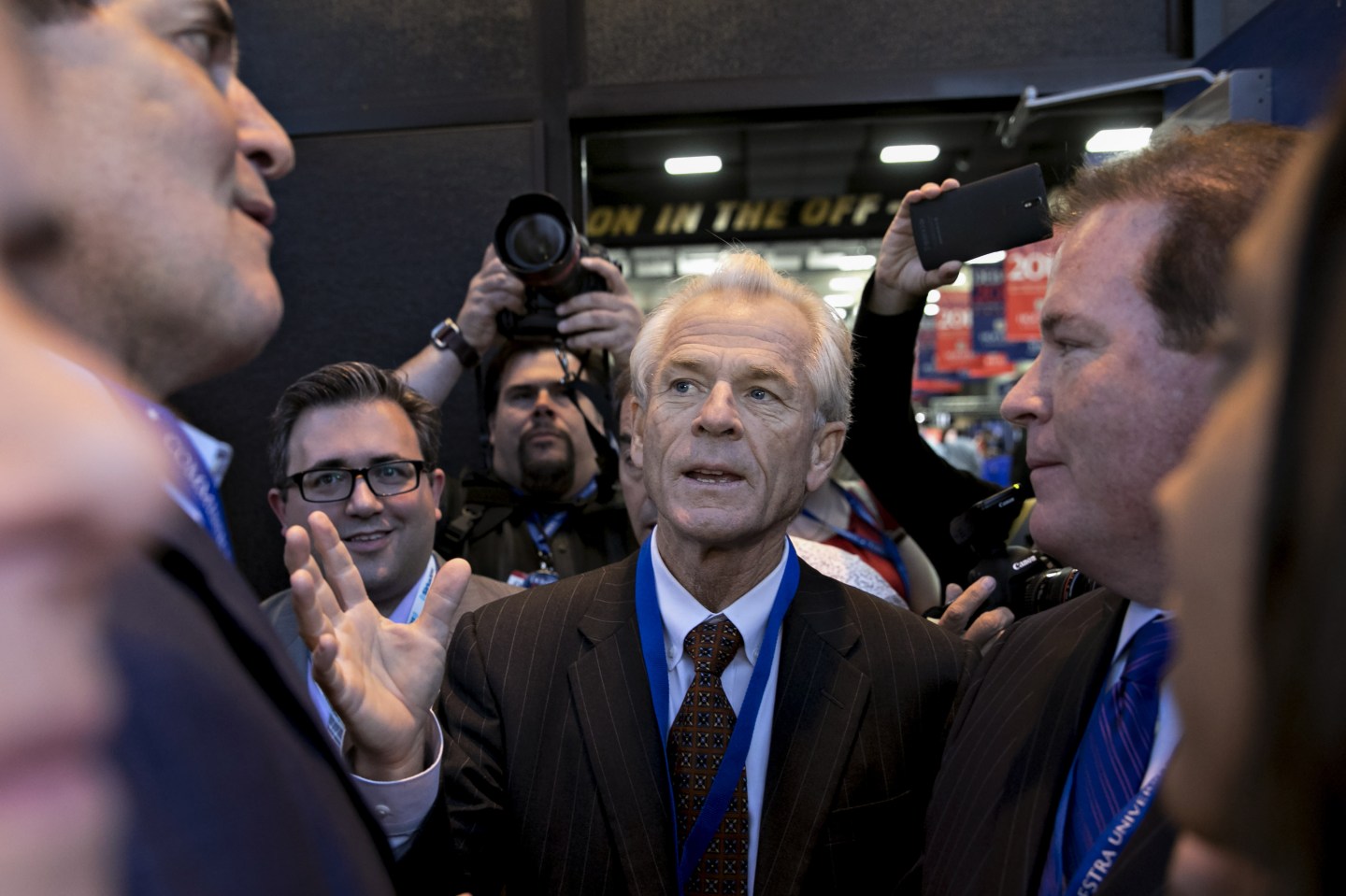 An aide to President Donald Trump dismissed as “smoke and mirrors” complaints by General Motors Co. and other American companies about the impact of U.S. tariffs on their operations.

“Increased import tariffs could lead to a smaller GM, a reduced presence at home and risk less — not more — U.S. jobs,” the nation’s largest automaker said in comments submitted Friday to the Commerce Department.

That such a blunt statement came from GM — a company run by a CEO, Mary Barra, whose normal tack is to avoid the political fray and let trade groups address the president’s policies — was surprising to industry observers. And it underscored how high she, and many industrial leaders, believe the stakes are as the president sinks the U.S. into tit-for-tat trade squabbles across the globe. GM’s public pronouncement follows similar moves by Harley-Davidson Inc., Toyota Motor Corp. and Daimler AG.

The “comment suggests how severe the impact would be to GM, its employees and consumers,” said Michelle Krebs, analyst with AutoTrader.com. “There is a lot at stake for GM, the auto industry and the overall economy.”

Navarro shot back at GM on Saturday in an interview on CNN, saying the auto company was using “smoke and mirrors” to deceive the public. He said the impact of tariffs on the price of a GM car was equivalent to “a luxury floor mat.”

“Even the GM cars built here, about half the content is foreign,” Navarro said, adding that U.S. factories had become “assembly plants” stitching together components made elsewhere.

Navarro added that Trump, having passed a tax cut that helps companies like GM and Harley, “felt betrayed” when they then threatened to move production jobs outside the U.S. in response to the retaliatory actions of foreign countries to Trump’s tariffs.

That echoed a tweet from Trump on Wednesday directed at Harley-Davidson: “I’ve done so much for you, and then this.”

Trump ordered an investigation of whether auto imports pose national security risks last month under a section of the same 1960s trade law used to impose levies on steel and aluminum. The administration is said to be considering auto tariffs of as much as 25 percent.

Trump told reporters aboard Air Force One on Friday afternoon that he expected the Commerce Department to complete the investigation “in three or four weeks.”

Under the trade statute, Commerce Secretary Wilbur Ross has until February to conclude the inquiry. But people familiar with the matter said Trump wants the investigation to be finished before the midterm elections in November so he can use the tariffs to his political advantage.

The probe has raised alarm among manufacturers, parts suppliers and auto retailers because all major carmakers — including GM and Ford Motor Co. — import a substantial share of the vehicles they sell in the U.S. from other countries. Levies on parts also would have major implications for top models like the Ford F-150 pickup and Toyota Camry sedan by boosting prices by thousands of dollars.

GM fell 2.8 percent — to $39.40 — in New York, and has now posted three straight weekly declines, the longest such streak since March.

“So this came as a little bit of a shock to us,” he said, “as we thought they were working more along the lines of making sure the administration knows the severity of the impact tariffs would have.”

Barra had earlier tried to stay on good terms with Trump. She continued to serve on his Strategic and Policy Forum even after many other CEOs, such as Walt Disney’s Bob Iger and Tesla’s Elon Musk, quit to protest Trump’s withdrawal from the Paris climate agreement last year. The forum was disbanded in August following Trump’s tepid response to attacks by white supremacists in Charlottesville, Virginia.

Now, the Detroit-based maker of Chevrolet, Cadillac, Buick and GMC vehicles is warning that additional tariffs — on top of those recently slapped on steel, aluminum and Chinese products — could hurt GM and ultimately its customers. Higher prices would crimp sales, particularly to less-affluent consumers, and reduce the number of factory workers needed, it said.

If GM were to try to absorb the additional costs, it would have less money to invest in popular vehicles that sustain manufacturing jobs, or toward pivotal technologies including electric and self-driving cars.

“The threat of steep tariffs on vehicle and auto component imports risks undermining GM’s competitiveness against foreign auto producers by erecting broad brush trade barriers that increase our global costs, remove a key means of competing with manufacturers in lower-wage countries, and promote a trade environment in which we could be retaliated against in other markets,” the company said.

GM’s Chevrolet Silverado pickup was the top-selling model imported from Mexico last year, while the Chevrolet Equinox crossover was the leading vehicle sourced from Canada, according to LMC Automotive.

Just last week, GM announced plans to bring back the Chevy Blazer SUV later this year. The iconic American brand will be built at a plant in Mexico, a move that sparked angry comments from the United Auto Workers union. In its response, the UAW said that GM sells 80 percent of its Mexican-made vehicles in the U.S.

“GM imports a lot of pickup trucks from Mexico, so it’s a huge issue,” Alan Baum, an auto analyst in West Bloomfield, Michigan, said. “And for parts, it’s not just GM. Everyone imports a lot of electronics from Asia. Those are are high-value parts.”