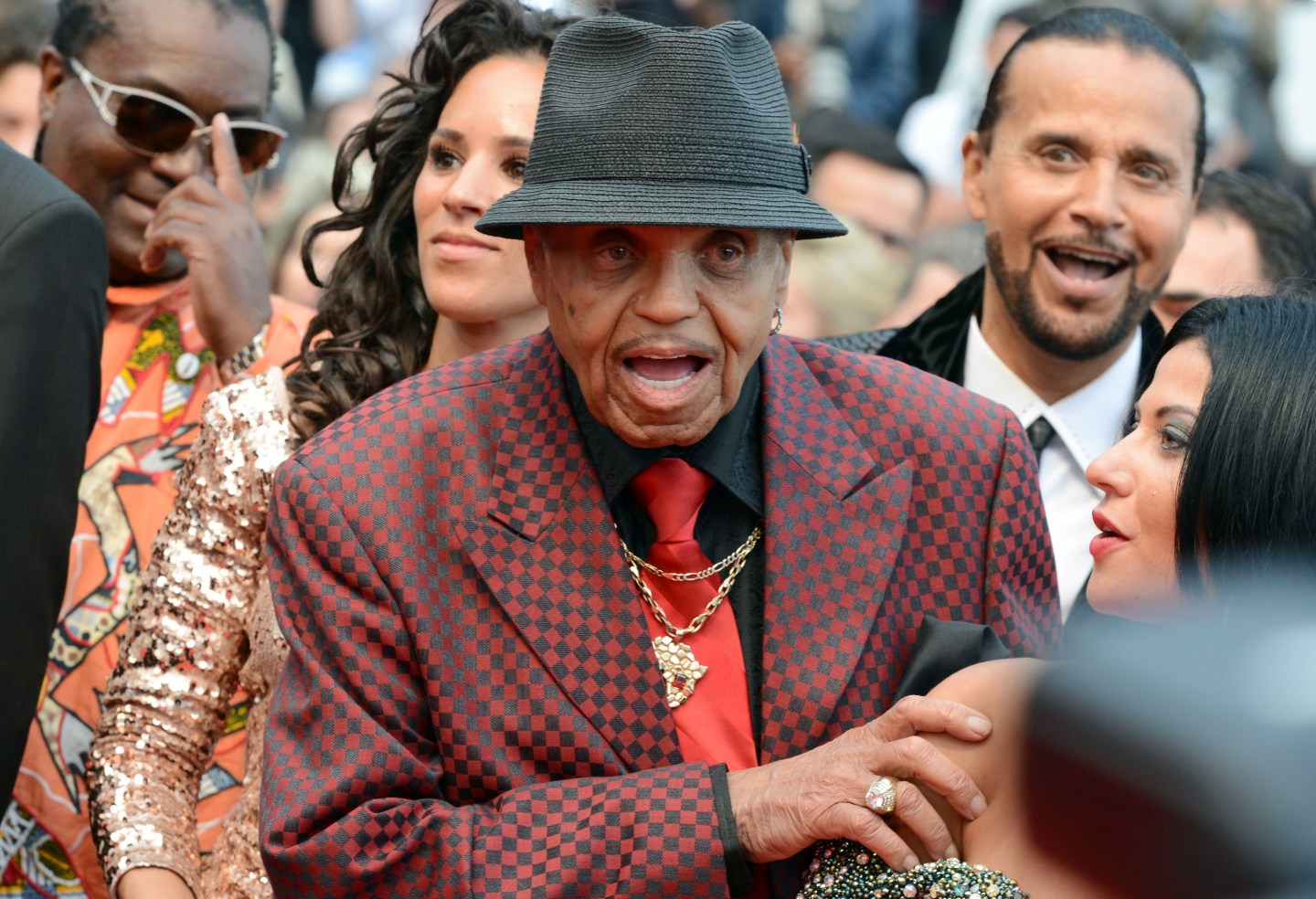 Joe Jackson (C), Michael Jackson's father, and guests pose on the red carpet as they arrive for the screening of the film "Sicario" in competition at the 68th Cannes Film Festival in Cannes, southern France, May 19, 2015. REUTERS/Jean-Pierre Amet - LR2EB5J1GAOC8
Jean-Pierre Amet—Reuters

Joseph “Joe” Jackson, the patriarch of a musical dynasty whose controlling ways led the Jackson Five to fame before alienating his family from him, died at 89 in Las Vegas.

Jackson was born in Fountain Hill, AK. in 1928 and grew up in Oakland, Calif. and later East Chicago, IN, where he met his future wife Katherine. After settling in Gary, IN., Jackson worked as a crane operator at U.S. Steel and began fostering musical talents he saw in his sons Jackie, Tito, and Jermaine.

Later, his younger sons Marlin and Michael would join what would become known as the Jackson 5. Jackson managed the group with a firm hand and worked to promote them to a broader audience. In 1965, he sent a tape of the Jackson 5 to Motown founder Berry Gordy, who returned it with no offer to sign the band.

But by 1967, the Jackson 5 was performing in the Apollo theater. A year later, Motown signed the band, and by 1970 they were an international sensation with hits such as “ABC” and “I’ll Be There.” Jackson broke from Motown in 1975, believing that the label was stifling the band’s creativity. The Jackson 5 moved to Epic, a move that paved the way for Michael Jackson’s phenomenal success.

But Jackson’s distant nature and alleged physical abuse of his children led Michael and his siblings to dismiss their father as manager. In later years, Michael and Janet Jackson would indicate ambivalent attitudes toward their father, recalling their love for him as well as his abusive behavior.

In his own interviews, Joe Jackson maintained he never hit his children, but used “a switch and a belt.” In a 2010 interview with Oprah Winfrey, Jackson said he didn’t regret hitting his children, believing that it helped lead to their musical success. “I’m glad I was tough, because look what I came out with,” he said in another interview in 2013.

In his later years, Jackson was reportedly living alone, with most of his family members having grown estranged from him over the years. In 2009, Jackson filed a petition seeking an allowance of $15,000 a month from Michael’s estate. Several years later, an unnamed family member told the New York Post that Joseph Jackson was “no longer a part of the family.” Jackson’s net worth was estimated by some this year to be $500,000.

Jackson remained active on Twitter, tweeting about his travels in his interest in the financial markets. On Sunday, he posted his final tweet, musing, “I have see more sunsets than I left to see.” Jackson was reportedly hospitalized on Friday with terminal cancer.

I will always love you! You gave us strength, you made us one of the most famous families in the world. I am extremely appreciative of that, I will never forget our moments together and how you told me how much you cared. #RIP Joe Jacksonhttps://t.co/F5UfYjEgYx

RIP to the king that made everything possible!!! I love you grandpa 🖤🖤 pic.twitter.com/SI1C7lUuG6

This weekend, Janet Jackson, the youngest of the Jackson children, paid tribute to her father while accepting an award. “My mother nourished me with the most extravagant love imaginable,” she said. “My father, my incredible father drove me to be the best I can. My siblings set an incredibly high standard, a high bar for artistic excellence.”