Why European Tension Is Rising Over Migrants (Again) 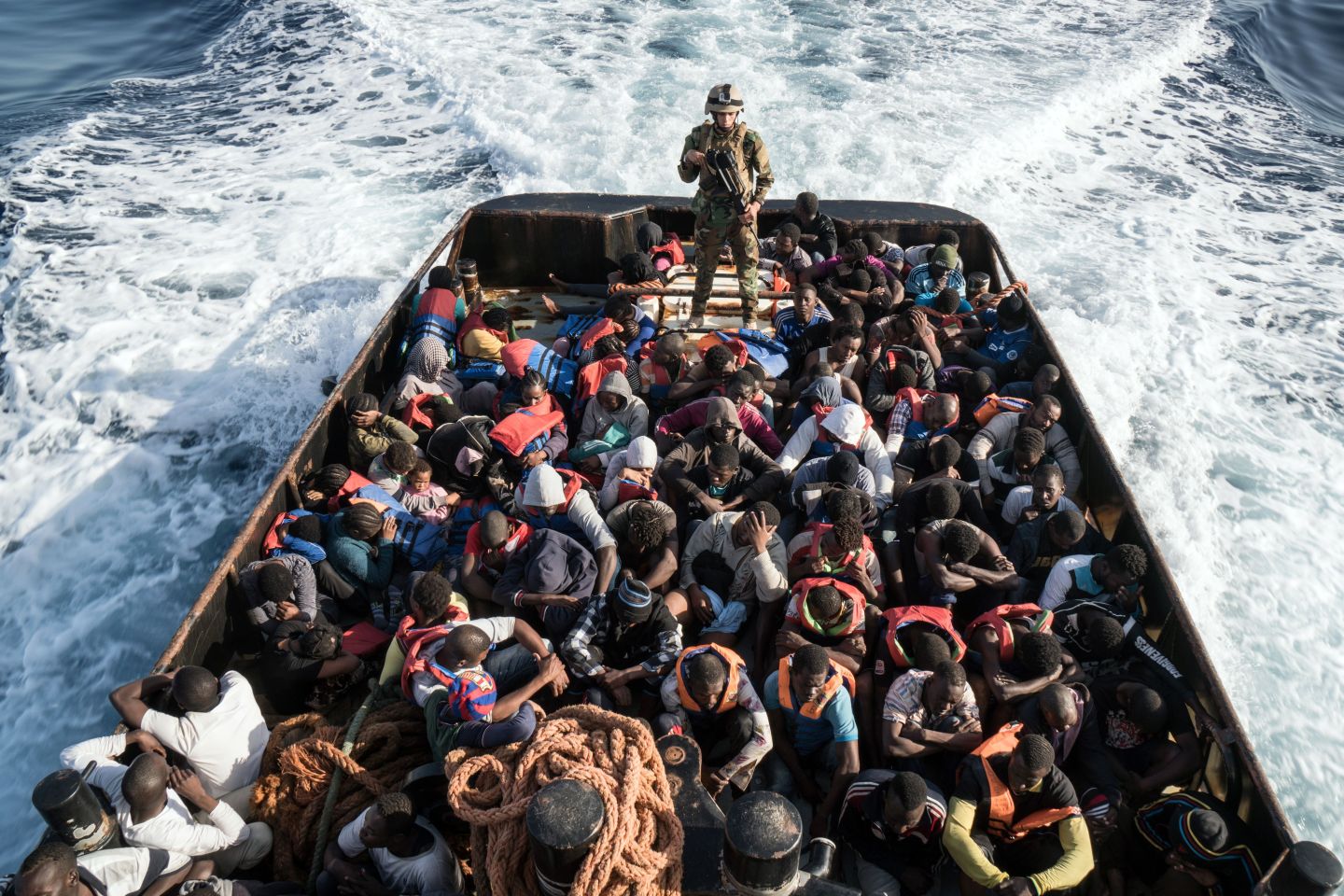 TOPSHOT - A Libyan coast guardsman stands on a boat during the rescue of 147 illegal immigrants attempting to reach Europe off the coastal town of Zawiyah, 45 kilometres west of the capital Tripoli, on June 27, 2017. More than 8,000 migrants have been rescued in waters off Libya during the past 48 hours in difficult weather conditions, Italy's coastguard said on June 27, 2017. / AFP PHOTO / Taha JAWASHI (Photo credit should read TAHA JAWASHI/AFP/Getty Images)
TAHA JAWASHI/AFP/Getty Images

Migrants arriving on Europe’s shores are stoking a political crisis once again, three years after a surge of refugees threatened to overwhelm the European Union. Although the number of arrivals across the Mediterranean Sea is just a fraction of what it was in 2015, EU leaders are urgently revisiting a stalled revamp of the bloc’s asylum system. It’s a challenge that German Chancellor Angela Merkel describes as a ” litmus test” for the future of European unity.

1. What sparked the current crisis?

Anti-immigration political parties across the bloc have surged in popularity, emboldening the push for change. The new populist Italian government came to power arguing that Italians unfairly bear the brunt of the influx — and their EU neighbors should shoulder more of the burden. The anti-immigrant firebrand Matteo Salvini, Italy’s interior minister, on June 11 refused to allow a rescue ship carrying 629 migrants and refugees to dock in Sicily. Spain stepped in to offer shelter. Most migrants from Africa land in Italy, arriving via human-trafficking networks in overcrowded vessels from a lawless Libya. Italy estimates that it spent 4.3 billion euros ($5 billion) on migrants in 2017, while receiving only 77 million euros in EU aid.

2. How are migrants handled now?

The EU asylum rules, enshrined in the so-called Dublin regulation, assign responsibility for processing asylum claims — a lengthy and costly process — to the first nation a migrant enters. That puts a bigger burden on Italy, Malta, Greece and Spain. The rule is widely flouted, and once they enter the EU many migrants press ahead through Europe’s passport-free travel zone to richer countries, notably Germany and Sweden. Not all migrants are considered refugees: Those escaping war or persecution are protected under the 1951 UN Refugee Convention and can’t be turned away. So-called economic migrants move because of poverty or to seek better opportunities, and can be sent home. Nearly all arrivals in Europe claim refugee status and apply for asylum. In 2017, 54 percent of asylum requests were rejected.

3. What are EU leaders considering?

They’ve been deadlocked for two years over a plan to revamp asylum rules through a system that will relocate refugees across the bloc when a gateway country is overwhelmed. Nations such as Hungary have balked at accepting their share, while southern countries oppose separate provisions to tighten obligations on handling initial registrations. At a June 28-29 summit in Brussels, EU leaders may endorse the notion of “regional disembarkation platforms” in countries such as Libya, from which migrants would apply for asylum before entering the EU. The proposal, included in a draft summit statement, is intended to deter perilous journeys across the Mediterranean, provide for rapid processing to weed out economic migrants and allow greater leeway in determining their final destinations.

4. Why is this an issue in Germany?

Merkel faces a rebellion in her ruling coalition from Interior Minister Horst Seehofer, who leads the Bavarian sister party of her Christian Democratic Union. He gave the chancellor a two-week ultimatum to secure an EU agreement that would return migrants to the countries in which they were first registered. If she fails to deliver, Seehofer has threatened to start turning away migrants at the German border. While it’s unclear whether he would use his ministerial power to follow through, risk being sacked and trigger German instability, Merkel has agreed to seek a Europe-wide deal on migration. In response, the EU has called a special migration summit of those countries most affected for June 24.

5. Is Europe seeing a surge of refugees?

No. Quite the opposite. There was a surge in 2015, when more than 1 million migrants arrived in Europe after Russian bombing escalated Syria’s civil war. Most landed on beaches in Greece and headed north through the Balkans in a bid to reach Germany. The flow largely stopped after a March 2016 deal with Turkey, which agreed to accept the return of people who had entered Greece illegally in return for 6 billion euros in aid. The number of arrivals in 2016 fell to about a third of 2015’s level, and to around 172,000 last year.

The columns of migrants in 2015-2016 stirred the fears of locals, opened up divisions among EU nations and fueled a populist backlash against establishment parties. Germany, Sweden and other countries temporarily reintroduced some border controls, while Hungary, Slovenia and Macedonia erected fences along sections of their borders. Nationalist politicians have fanned concerns that the refugees, many of whom are Muslim, could bring crime and terror. On June 18, President Donald Trump falsely claimed via Twitter that crime had risen in Germany as a result of migration; statistics show violent crime in Germany fell 2.4 percent last year.