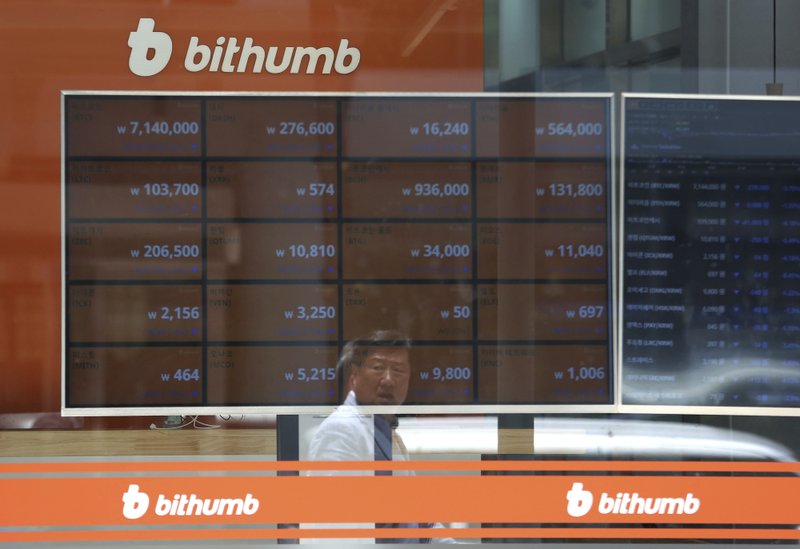 Cryptocurrencies dropped after the second South Korean exchange in as many weeks said it was the victim of a theft, renewing concerns about the safety of digital-asset trading venues.

Bithumb, ranked No. 7 globally by traded value on Coinmarketcap.com, said on Wednesday that hackers stole about 35 billion won ($32 million) and that Ripple was among the coins taken. The exchange halted cryptocurrency deposits and withdrawals, said it will compensate victims and moved investor assets to a so-called cold wallet, which is disconnected from the Internet and less vulnerable to theft.

Bitcoin, the largest cryptocurrency, dropped as much as 2% and was trading at $6,588 as of 12:15 p.m. in Hong Kong, bringing this year’s decline to 54%, according to Bloomberg composite pricing. Ripple, Ethereum and Litecoin also retreated, along with some Asia-listed stocks with exposure to digital currencies.

Enthusiasm for virtual currencies has waned this year partly due to a string of cyber heists, including the nearly $500 million theft from Japanese exchange Coincheck Inc. in late January. Last week, a South Korean venue called Coinrail said that some of the exchange’s digital coins appeared to have been stolen by hackers, though it didn’t disclose how much.

While news of the latest theft has weighed on sentiment, the reaction has been relatively subdued, said Ryan Rabaglia, head trader at cryptocurrency dealing firm Octagon Strategy Ltd. in Hong Kong. “The market has sort of become a bit more battle-hardened. It can weather the storm on these negative reports.”

The crypto-mania that spread worldwide last year was particularly intense in South Korea, with Bitcoin prices in the country at one point climbing to a 50% premium over those in America.

The speculative fervor has since cooled amid a government crackdown, but South Korean exchanges are still among the world’s most active. The country’s policy makers are debating comprehensive regulations for cryptocurrencies, with proposals ranging from shutting down local exchanges to allowing them to operate under increased supervision.

Bithumb said on Wednesday that it reported the theft to the Korea Internet & Security Agency and that officials there are investigating.

The hacks in South Korea show “how ill-prepared a lot of the exchanges still are across large markets,” said Vijay Ayyar, the Singapore-based head of business development at Luno, a cryptocurrency exchange. “The overall market is seeing a lot of regulatory action and incidents like these will only hasten the process.”