Alberto Could Bring $1 Billion in Economic Losses to Gulf Coast 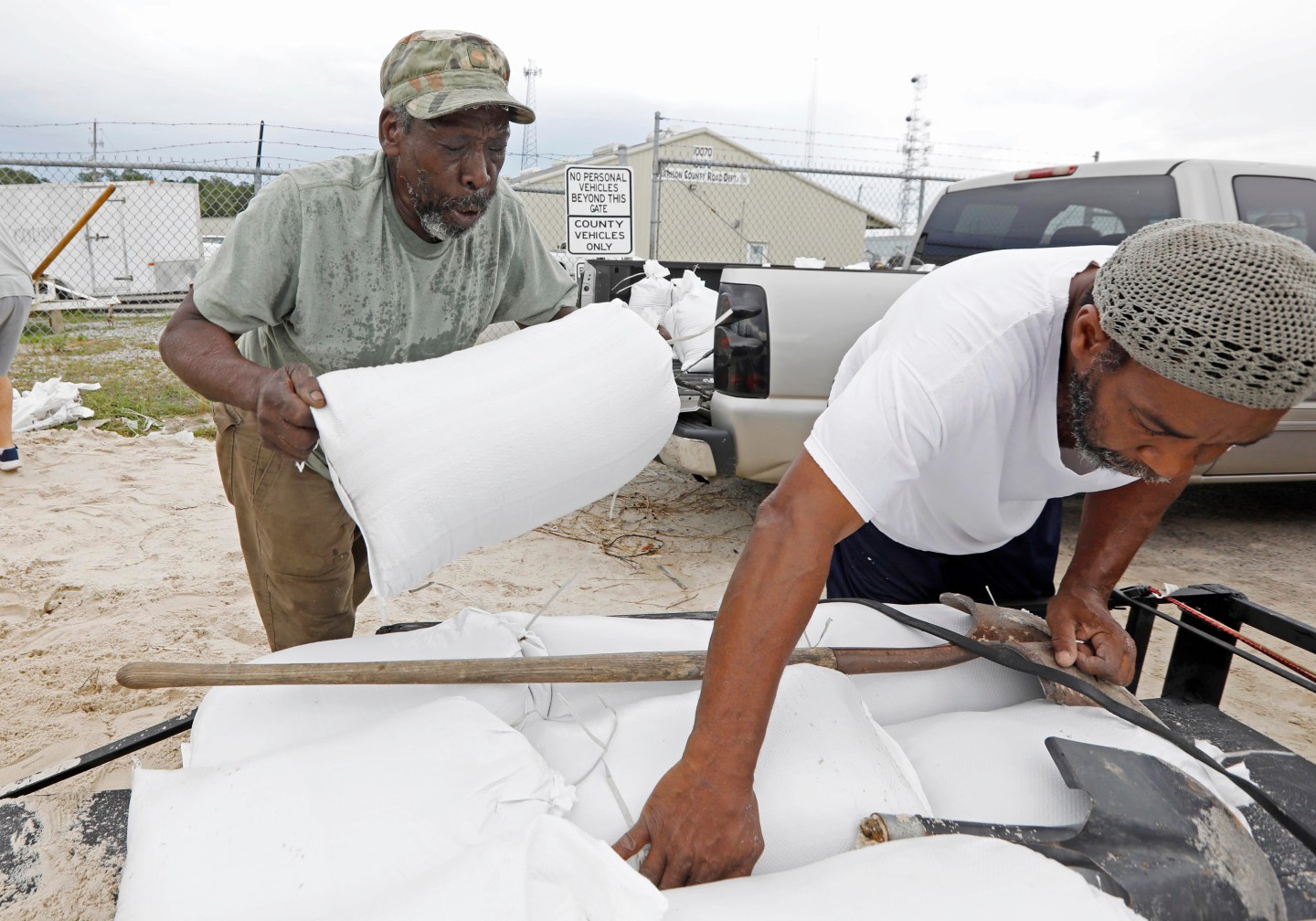 Mandatory Credit: Photo by Rogelio V. Solis/AP/REX/Shutterstock (9694280b) Tommy Whitlock, Joseph Buckner. Tommy Whitlock, left, places a filled sand bag onto his trailer at a Harrison County Road Department sand bag location, as his friend Joseph Buckner adjusts the load while preparing for Subtropical Storm Alberto to make its way through the Gulf of Mexico in Gulfport, Miss., . Whitlock, who lives near a creek wants to keep the spill off water from entering his home. The slow moving storm is threatening to bring heavy rainfall, storm surges, high wind and flash flooding this holiday weekend. Several similar setups were placed throughout the Mississippi Gulf Coast to help residents protect their property. The sandbagging process was left to the residents Tropical Weather, Gulfport, USA - 26 May 2018
Rogelio V. Solis—AP/REX/Shutterstock

Slowly strengthening Subtropical Storm Alberto could cause more than $1 billion in economic losses to the U.S. Gulf Coast as it tracks north, bringing a growing threat of floods, but it’s had little impact on offshore energy production.

Alberto’s top winds rose to 50 miles (80 kilometers) per hour early Sunday, up from 40 earlier, the National Hurricane Center said in a 11 a.m. New York time advisory. Winds are forecast to reach 60 mph 12 hours and it should be over land in the Florida Panhandle in 24 hours. A storm’s winds need to reach 74 mph to be called a hurricane.

Governors in Florida, Mississippi and Alabama on Saturday declared states of emergency.

“The main concern from Alberto is flooding; not so much along the immediate coast, but inland, from the heavy rains that are coming on top of over a week of rain across the southeast,” said Chuck Watson, a disaster modeler at Enki Research in Savannah, Georgia. “A secondary concern is that even relatively minimal tropical storm winds can topple trees due to saturated soils and water-heavy limbs.”

Last week, another pulse of tropical moisture that didn’t rise to the level of a storm soaked the South.

Alberto could cause $400 million to $500 million across the South, including damage to cars crushed by toppled trees, wrecked roofs and flooding, Watson said in an interview. On top of that, there could be as much as $600 million in lost holiday spending as Alberto puts a damper on plans during the Memorial Day three-day weekend.

Flood and flash-flood watches are spread across Mississippi, Alabama and Florida, where 4 to 7 inches (10 to 18 centimeters) of rain could fall through early next week and reach into South Carolina, North Carolina and Tennessee expected to be hit by Alberto’s remnants, the National Weather Service said.

Alberto’s moisture could push all the way to Canada in coming days, Pydynowski said.

“We will be dealing with the rainfall and the moisture for most of the week,” Pydynowski said. “But the winds will die down pretty quickly.”

The storm was about 130 miles west-southwest of Tampa, moving north at 14 mph, the hurricane center said.

On Friday, Exxon Mobil Corp. pulled non-essential personnel from its Lena oil production platform and Royal Dutch Shell Plc shut in its Ram Powell hub, but most other energy companies are leaving offshore crews in place while they watch 2018’s first Atlantic storm.

Alberto formed days ahead of the official start of the six-month Atlantic hurricane season on June 1. In the end, it might not be wind and disruption to energy production that the storm is best known for.

Storms in the Gulf are closely watched because 5 percent of U.S. natural gas and 17 percent of crude-oil production comes out of the region, according to the Energy Information Administration. Onshore areas along the coast also account for about 45 percent of U.S. refining capacity and 51 percent of gas processing.