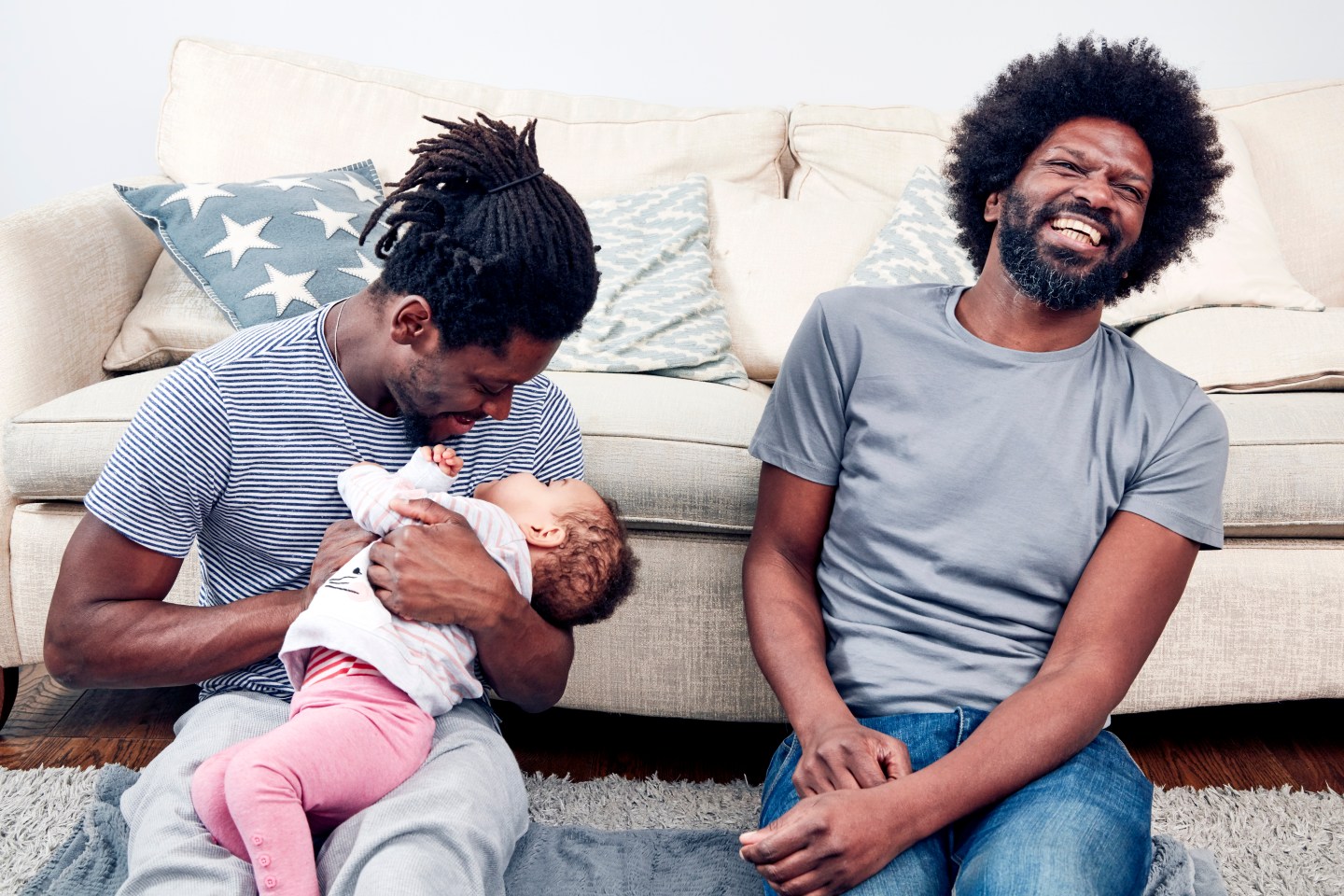 The tap on the shoulder meant so much.

“Our @salesforce Little Ohana educator pulled us aside yesterday,” tweeted James Loduca, the Director of Equality Programs at Salesforce. The new dad has been an enthusiastic parenting presence on Twitter since he and his husband, Charlie Smith, announced the arrival of their daughter Charlie Elouise Loduca-Smith last September.

Our @salesforce Little Ohana educator pulled us aside yesterday. They are planning a #MothersDay project & she wanted to know if we preferred Charlie make art for a grandma or have private play time. #inclusion💜 #EqualityForAll🏳️‍🌈 #gaydads👨‍👨‍👧 pic.twitter.com/UfeaIvIKqa

“They are planning a project & she wanted to know if we preferred Charlie make art for a grandma or have private play time #inclusion #EqualityForAll #gaydads,” he continued.

It was a reassuring moment for their first “Mother’s Day” as a family.

Mother’s Day can be fraught for many reasons for many people. There are blended, foster and grandparent-led families and homes where other loving people have stepped into mothering roles who often go unacknowledged. And there are plenty of families out there like the Loduca-Smiths – between 2 million and 3.7 million children under age 18 have an LGBTQ parent, and approximately 200,000 of them are being raised by a same-sex couple.

But some circumstances can be particularly difficult. Kids, or their mothers, may be grieving a death, or separated because of illness, addiction, or incarceration. For kids, parents, and caregivers who are bombarded by messages of “traditional” motherhood and Mother’s Day activities at school, corporate daycare, and at church, it can be particularly isolating.

Brands are starting to notice.

This year, Teleflora has launched an emotional ad campaign called “Love Makes a Mom,” a series of minute-long vignettes created by the in-house marketing agency of Teleflora parent, The Wonderful Company.

One story is about a black, lesbian couple with an adorable daughter, who are all thriving despite the judgments of others. Another is about an Army veteran and entrepreneur who is raising her fifteen-year-old half-sister. “Our mother has come in and out of both our lives,” she says. “And if you’ve gone through something that’s not great, you don’t want it to happen to other people.”

“This Mother’s Day we’re seeing retailers win over consumers with impactful campaigns that breakdown the traditional constructs of Mother’s Day as a greeting card holiday, and instead focus on the themes and topics their audience, mothers and families, cares about most,” says Kristin Johnson, the communications director at Sprout Social, a venture-backed social media management platform. “Brands realize that safe, traditional campaigns ensure no one will be offended, but they also ensure you won’t create a devoted customer base.”

The Teleflora campaign has been mentioned in nearly 4,500 Mother’s Day messages on Twitter alone.

But however families are configured, Mother’s Day is a reminder that the best way to know what people need is to ask them.

“Inclusion can live in big programs and small gestures — and it’s usually quiet moments like this that stick with you the most,” Loduca and Smith told raceAhead via email. “Mother’s Day can provoke anxiety for gay dads, and it only took 30 seconds for someone to reaffirm our family. We’ll never forget it.”

And neither will Loduca’s own mother, who, spoiler alert, will be getting Charlie’s first-ever handmade Mother’s Day card.

Here are some other resources to help shape your thinking:

Welcoming Schools, a professional development program for educators from the Human Rights Campaign, has a wonderful guide to creating inclusive Mother’s and Father’s Day celebrations for teachers and day-care providers.

GLAAD’s Mother’s Day resource kit has suggestions for journalists, communications professionals and anyone, really, on how to make the holiday more inclusive for LGBTQ families.

Ten ways to make holiday gatherings better when a family member is addicted or in recovery.

A recent survey from New York Life shows the overwhelming impact that the loss of a parent has on children before the age of 20, and offers helpful suggestions on how to check in and support them during difficult holidays or anniversaries.

Some ideas on how to speak to mothers who have lost children to violence from Mothers/Men Against Senseless Killings, a Chicago-based advocacy group.

National Black Mama’s Bail Out Day, established last year, raises money to help bail out incarcerated black mothers so they can spend the holiday with their children. According to The Atlantic, some 60 percent of people in U.S. jails have yet to go to trial, and around nine in ten people remain incarcerated simply because they can’t afford bail.