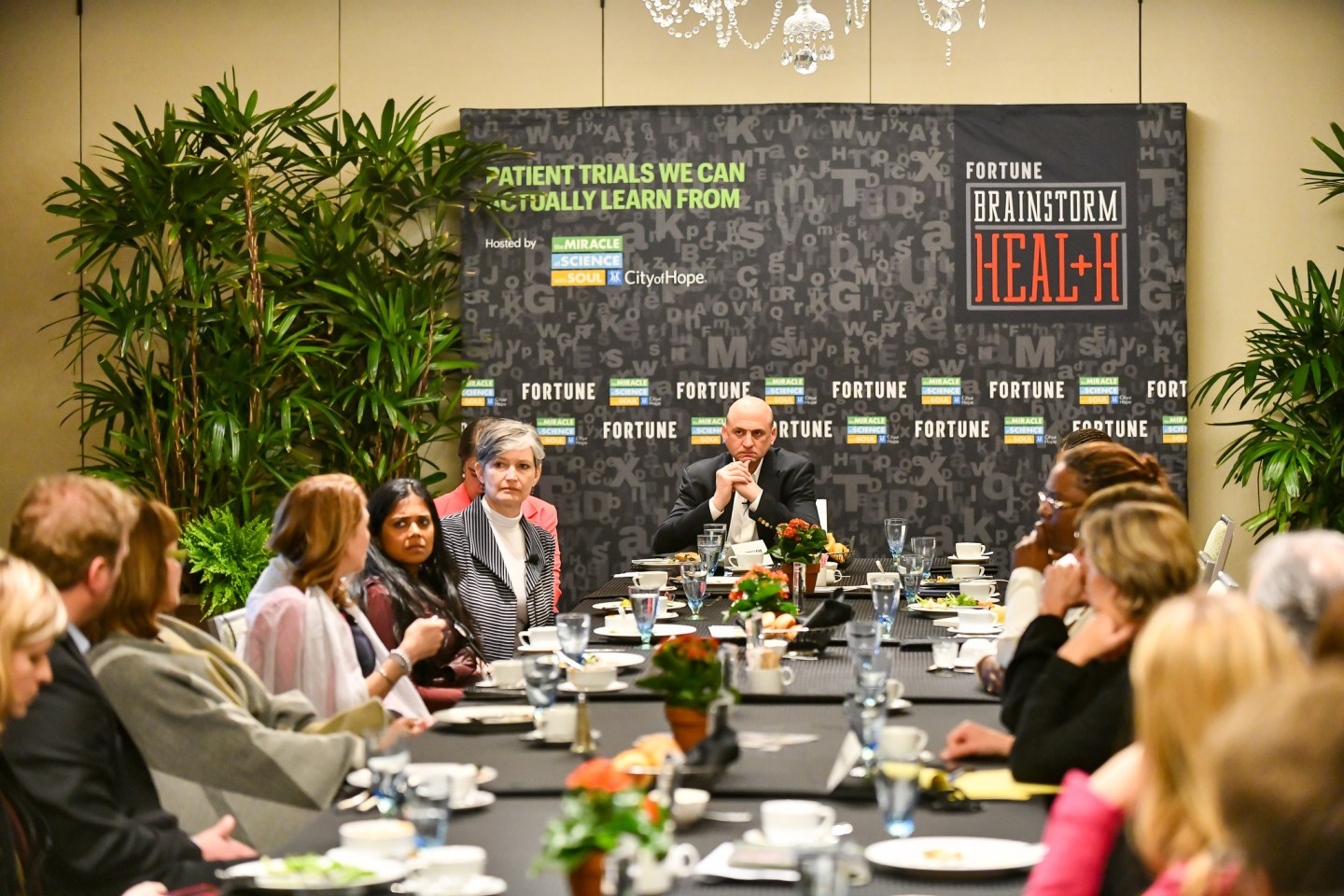 LAGUNA NIGUEL, Calif.—The cost to develop and gain FDA approval for a new drug today is more than $2.5 billion, according to the Tufts Center for the Study of Drug Development. Driving much of that cost are human clinical trials.

They’re necessary, from a regulatory standpoint as well as an intellectual one. And of course it’s a good idea to evaluate treatments before unleashing them on the broader public. But people aren’t enrolling in them.

Between 3% and 5%—and certainly under 5%—of adult patients are under clinical trial, Fortune editor-in-chief Clifton Leaf said Tuesday at a luncheon at Fortune’s Brainstorm Health conference. That’s a very low threshold compared to pediatric trials. Sure, you’re deliberately narrowing the selected group to reduce the number of variables, he said. But there’s more to it than that.

Getting the right patient is difficult, said Linda Malkas, a professor and associate chair in the Department of Molecular and Cellular Biology at Beckman Research Institute of City of Hope. They want to be close to home, too. “We’re almost getting a two-tier system here—those that have access to a major medical center and those that do not,” she said. And that doesn’t mention the challenges with reimbursement on both the clinical and patient sides.

When Kathy Giusti founded the Multiple Myeloma Research Foundation, there were no drugs for the blood cancer. So she built a clinical network and provided Phase I and II trials. “We were able to make so much progress by bringing the academic centers and everybody together,” she said. Still, “I don’t know if I would keep our clinical network the way it is. I probably would shake it up a lot.”

How? “In order to design your trials, you want to be data-driven,” Giusti said. “You want to be trusted third party bringing everyone together.” Now her foundation is doing more platform trials, in which multiple treatments are evaluated simultaneously. Yet “these trials are really hard to get off the ground,” she said.

“Trusted third parties may be helpful if they could get their act together in a really big way,” Giusti added. “I feel the responsibly to teach third-parties how to build a business. You can’t just go to your buddies in pharma. You have to get a target and get [the word] out [to people] as broadly as you can.”

Amy Abernethy, chief medical officer and chief scientific officer for Flatiron Health, questioned how those organizations offering trials can ensure that all available patients are contributing to them. “How do we use the data that’s already occurring as a byproduct of care in a smarter way?” she asked. You clean it up, analyze it better, and more thoughtfully involve patients. “One of the grand mysteries of medicine is all this data that is being generated—that we have a vortex of data. In fact, it’s really messy stuff.”

In other words, as much medical data as there might be, little of it arrives “clean” enough for use. Structured data requires formats to merge datasets together, Abernethy said. And unstructured data—the far more challenging of the two—requires trained humans and mechanisms to extract it from the “digital paper” where it resides.

What this all hopefully adds up to is a smarter clinical trial—one that doesn’t ignore the reality of the patients involved in it.

Matt de Silva, CEO of drug testing firm Notable Labs, said he co-founded the company after his father was diagnosed with multiple glioblastomas and was excluded from many trials because of the nature of his condition. Besides, de Silva said, “many drugs that were being tested in brain cancer were being repurposed” from other non-cancer uses. “My parents didn’t want to bet my Dad’s life on a pinworm drug,” he said. “Not for something that is one of the worst diagnoses you can receive. It was about not wanting to turn my Dad into a guinea pig.”

The problem, Malkas said, is that we do a lot of trials that are not worth doing. There are too many people and organizations making minor adjustments and launching new trials instead of looking at the big picture.

“That’s not going to move the ball down the field,” she said. “Just how many drugs have we thrown away?”

The health industry experts in the room murmured.