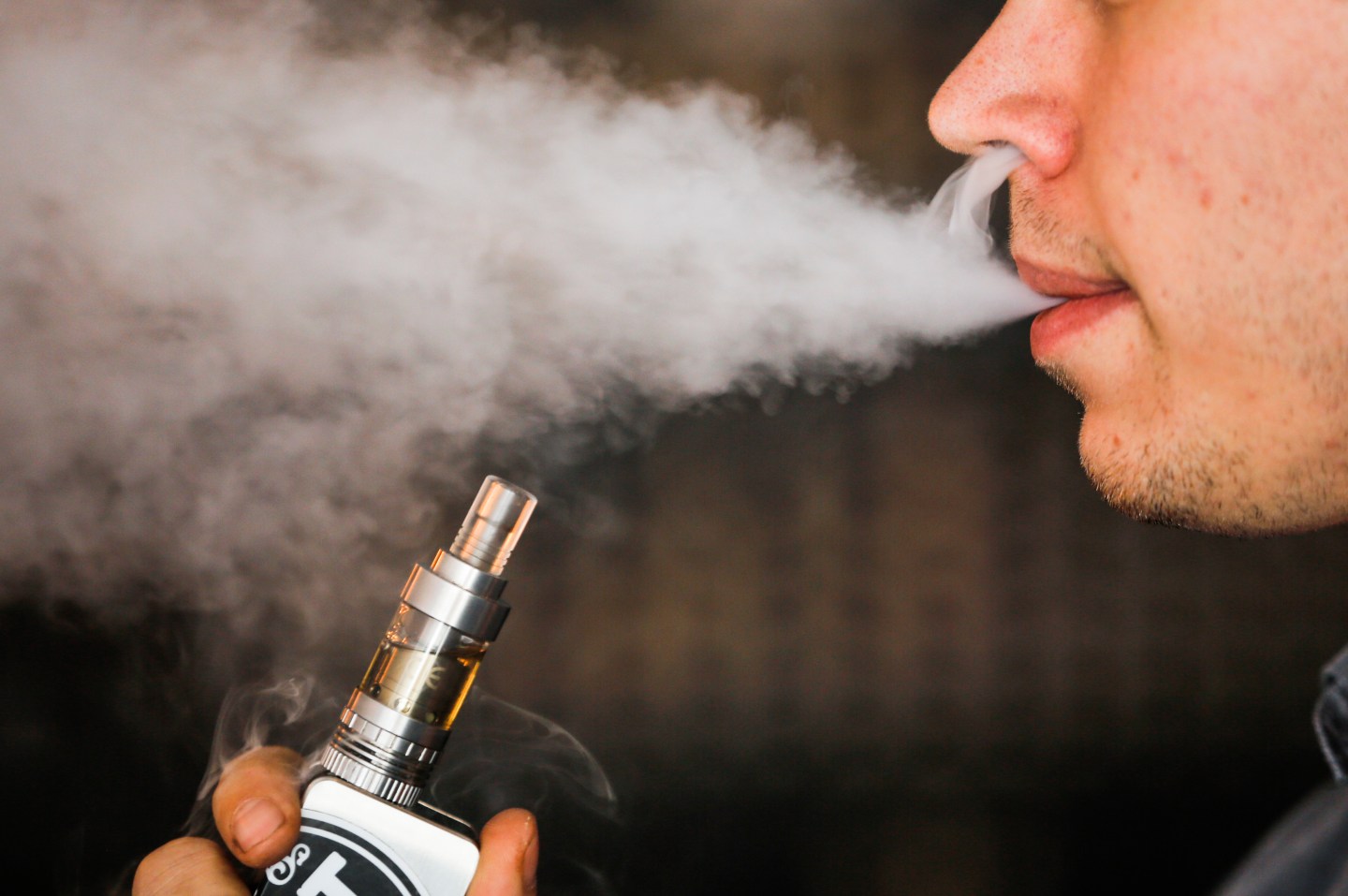 A man smokes an electronic cigarette vaporizer, also known as an e-cigarette, in Toronto, August 7, 2015. Many of the world's junior miners are laying down their picks and shovels to start new ventures ranging from egg exporting to e-cigarette company, as they as try to survive a crash in metals prices by shifting away from exploration. Picture taken on August 7, 2015. REUTERS/Mark Blinch - TM3EB87192101
Mark Blinch—Reuters

Electronic cigarettes have long been touted not only as a safer alternative to cigarettes but as a potential avenue by which existing smokers might quit. The industry, now worth $11.4 billion, hasn’t been hurt by this one-two pitch of safety and good public policy.

New research shows, however, that e-cigarettes are hurting a lot more than they help.

Researchers at Dartmouth College’s Norris Cotton Cancer Center said vaping has led more people to start a real smoking habit, rather than avoid tobacco or quit in favor of e-cigarettes, according to a study published Wednesday.

Using 2014 census data, published literature and surveys on e-cigarette usage to build a model, the scientists were able to estimate that about 2,070 cigarette-smoking adults in America quit in 2015 with the help of the electronic devices. However — and perhaps more alarming — the model estimated that, at the same time, an additional 168,000 adolescents and young adults who had never smoked cigarettes began smoking and eventually became daily cigarette smokers after first using e-cigarettes.

The model estimates that e-cigarette use in 2014 would eventually lead to about 1,510,000 years of life lost — a figure based on an optimistic 95% relative harm reduction of using e-cigarettes compared to traditional cigarettes.

Samir Soneji, an associate professor of health policy at Dartmouth’s Geisel School of Medicine and the paper’s lead author, said that advertising e-cigarettes as a means to quit or reduce smoking has done damage, mostly to young people. E-cigarettes use cartridges of chemicals, including nicotine, that are transformed into vapor. Despite a federal requirement that purchasers be at least 18 years of age, use of the product in popular culture, combined with its fruity flavors, have proved a strong draw to younger, would-be vapers. These characteristics have been at the core of keeping youths interested in the devices, Soneji said, and should be the focus of restriction efforts by the U.S. Food and Drug Administration.

“The harms of e-cigarette use among adolescents and young adults are serious,” he said. “Kids who vape are more likely to start smoking cigarettes — notably kids who were otherwise not at a high risk of starting to smoke.” Currently, Soneji said, the risk of initiating cigarette smoking is three times as high for adolescents who vape than for those who do not.

In 2015, 68 percent of Americans who smoked wanted to quit, with about 55.4 percent of them doing so successfully for at least one day, according to the Centers for Disease Control and Prevention. That same year, 45.5 percent of high school-aged cigarette smokers said they had tried to stop smoking over the previous 12 months. After first regulating the devices in 2016, the FDA embraced vaping as a way for smokers to quit.

Last July, a study published in the British Medical Journal found that e-cigarette users were indeed more likely than non-users to attempt to quit smoking — and be more successful at doing so. However, at around the same time the survey was conducted, e-cigarette use among high school students was jumping from 1.5 percent in 2011 to 16 percent in 2015, making the products the most commonly used tobacco product by young people in the U.S.

“E-cigarettes could, indeed, provide more population benefit if they were more effective as a cessation tool.”

Current research already points toward e-cigarettes being a public health risk because of the chemicals they use, making the new research even more problematic for the industry. However, the Dartmouth researchers point out that a future in which e-cigarettes do help people quit isn’t impossible — as long as they’re kept out of the hands of young people.

Alex Clark, executive director of Consumer Advocates for Smoke-Free Alternatives Association, an e-cigarette industry lobby group, called the study’s results “surprising,” given government studies showing an overall decline in smoking. (A recent CDC study shows that while smoking has declined, vaping has increased.) Clark said his organization prefers that e-cigarette makers be truthful in advertisements by marketing products as “less risky alternatives” to smoking that have the ability to help smokers quit.

The government has made some effort to dissuade young adopters, with a new requirement for product warnings set to take effect this summer. In October, the FDA addressed youth use of e-cigarettes and other electronic nicotine-delivery systems (ENDS) through its “The Real Cost” campaign. Commissioner Scott Gottlieb said in a statement that vaping devices are by far the most common source of experimentation with tobacco products among children.

“While we continue to encourage innovation of potentially less harmful forms of nicotine delivery for currently addicted adult smokers, we can all agree no child should be using any nicotine-containing product,” he said.