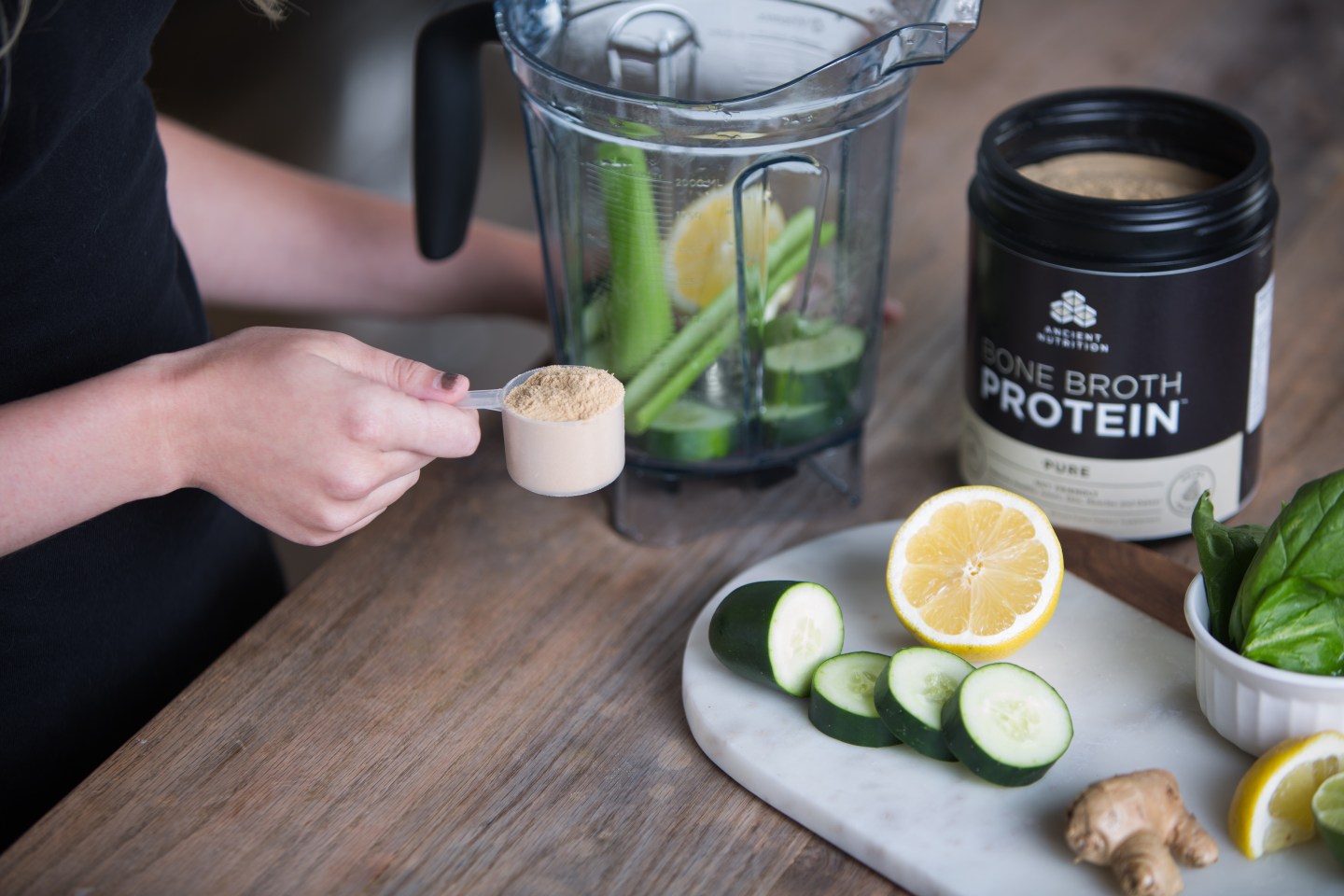 Bone broth is heating up.

Ancient Nutrition, the maker of a bone broth protein supplement, has landed a $103 million minority investment led by private equity firm VMG partners and including Hillhouse Capital and Iconiq Capital.

In addition to bone broth protein powder, Ancient Nutrition makes collagen protein, essential oils, and products that adhere to the ketogenic diet. The foundation of the company based on the premise that the diet of today’s consumer is disconnected from our ancestors and is therefore lacking in the nutrition we need to thrive.

“What I recommend to my patients is getting back to what our ancestors did,” says Ancient Nutrition co-founder Josh Axe. Axe also founded health website DrAxe.com, which has more than 17 million unique visitors per month.

Ancient Nutrition was co-founded in 2016 by Axe and Jordan Rubin, who sold his previous nutritional health products company to Nestle for $2.3 billion at the end of last year. “Jordan Rubin is a true legend in the natural products industry,” says Wayne Wu, managing director and partner at VMG.

VMG, which has invested in companies including Kind, Quest, and Vega, specializes in backing branded-consumer products companies. After vegan protein powder company Vega sold to Whitewave in 2015, VMG was looking for the next big product in the protein supplement category. The Ancient Nutrition product and the scale of the DrAxe.com site, which sells the company’s wares, was a “unique combination,” says Wu.

Ancient Nutrition is now the No.2 brand in the protein and supplements and meal replacement category in the natural channel, according to natural food industry tracker SPINS, and its sales are up 270% over the last 52 weeks to $13.8 million. “This is one of the fastest-growing companies we’ve seen in the space,” says Wu.

Ancient Nutrition is capitalizing on some of the biggest trends in the food movement, including protein, gut health, clean nutrition, and the paleo diet. “That’s the intersection of where this brand is playing,” says Jon Marshall, vice president at VMG. “It goes back to the fact that the modern American diet does not include a lot of the things that our ancestors consumed as recently as 100 years ago.”

The company plans to use the funding in part to innovate in new categories and expand in areas like essential oils, medicinal mushrooms, and probiotics.

Rubin says the idea for the company started when he was eating bone broth to help treat a knee injury. But he was traveling for work and couldn’t take the frozen bone broth product he’d been consuming with him. He had been working with Axe on the formulation of collagen, and one of the ingredients was concentrated bone broth powder. He took the powder on the road and started mixing it into liquid.

Rubin says that while most proteins are designed to build muscle in nature, bone broth contains elements and compounds that can build connective tissue.

Bone broth is not without its critics, however, who question its nutritional claims and say more research is needed.