Female Founders Got 2% of Venture Capital Dollars in 2017 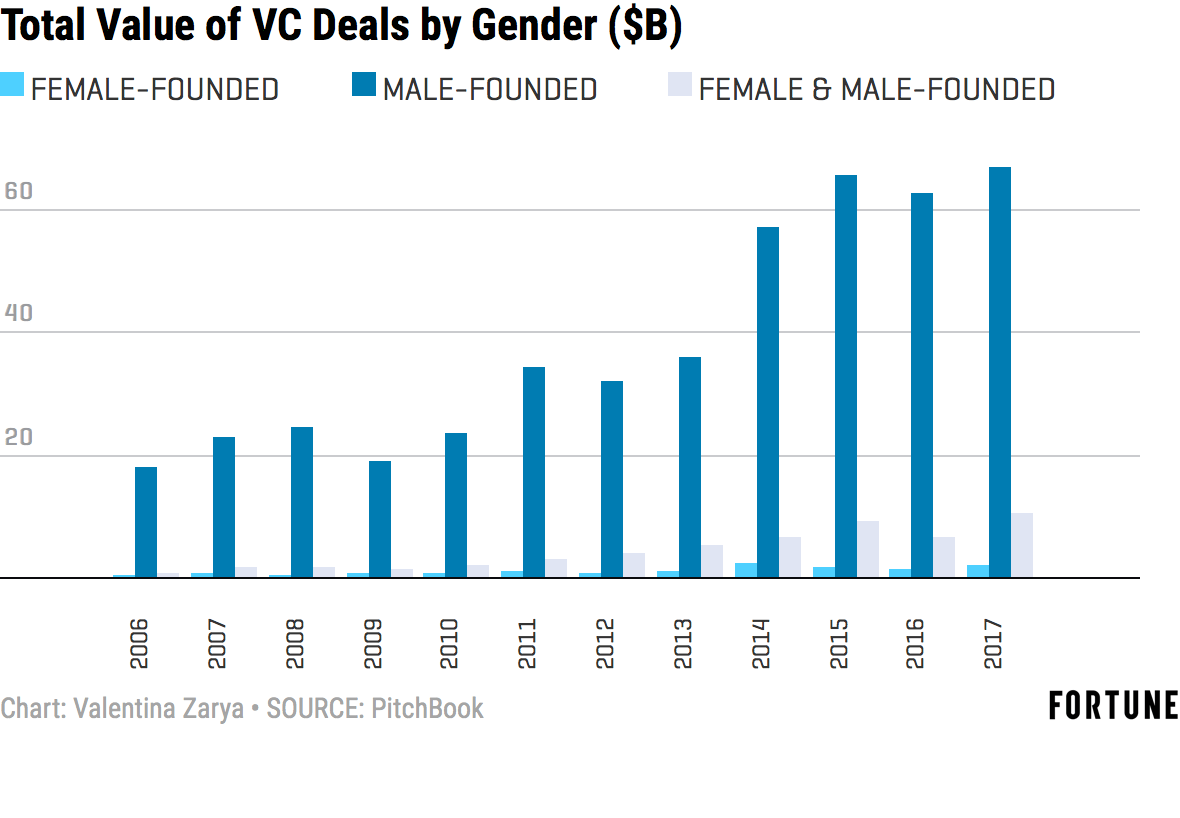 Things are changing for women in the startup and venture capital world. Last year, a handful of them came forward to share their stories of facing sexual harassment and discrimination—and a number of the industry’s powerful men, including Binary Capital co-founder Justin Caldbeck, 500 Startups founder Dave McClure, and former Tesla board member Steve Jurvetson—lost their jobs as a result.

But while the #MeToo movement may be altering some aspects of the VC landscape, it hasn’t yet translated into many more dollars for female founders. All-women teams received just $1.9 billion of the $85 billion total invested by venture capitalists last year, according to data on the from M&A, private equity, and VC database PitchBook. That’s equal to about 2.2% of 2017’s total pot. Meanwhile, all-male teams received about $66.9 billion—roughly 79%. (Of the remaining 19%, 12% of funds were raised by mixed-gender teams, while 7% was raised by teams whose gender makeup PitchBook was unable to confirm.)

The size of the gap is staggering, but there is a sliver of a silver lining: It’s smaller than last year’s. In 2016, female founders raised just $1.4 billion—or 1.9% of total VC funding. In fact, with the exception of 2014, 2017 marks the largest percentage of total venture dollars that has gone to female founders since PitchBook started tracking the data in 2006.

In terms of deal count, women-founded companies set a record last year, making up 4.4% of all VC deals—the largest percentage since 2006. Of course, the actual number of deals involving female-led startups still dismally low (368 compared to 5,588 for all-male teams), and the gap between the percentage of deals and percentage of dollars that go to women hints at the fact that VCs are writing smaller checks for female founders. The average deal size for a woman-led company in 2017 was just over $5 million. For a man-led company, that number is a little less than $12 million.

Consider the 10 biggest deals raised by female founders compared to the 10 biggest rounds landed by men. While the largest round invested in a woman-led startup was $165 million (Moda Operandi’s Series G), the largest that went to a male-led company (WeWork, also a Series G) was $3 billion. And the co-working space is not an outlier. Even the tenth-largest deal on the list comes in at half a billion dollars, or more than four times larger than the largest round raised by a women-led company.

Subscribe to The Broadsheet, Fortune‘s daily newsletter for and about the most powerful women in business.

This is Fortune‘s second examination of the gender gap in venture capital funding. The version of the story we wrote last year explores the reasons behind this gap. While there is no single definitive answer, female founders point to the lack of female VCs (about 8% of partners at top VC firms are women), the idea that women typically “ask for less” than men do, and the research that suggests that women tend to be judged on performance and men on potential—giving men a leg up when it comes to raising funds.

Last year, Stitch Fix CEO Katrina Lake said she saw the lack of easy cash as a positive thing, telling Fortune that as a result, she had had to figure out “how the business is going to be healthy and how the business is going to be sustainable.” In her case, at least, it seems to be working out: At the end of 2017, Lake led her clothing subscription service through a billion-dollar IPO.