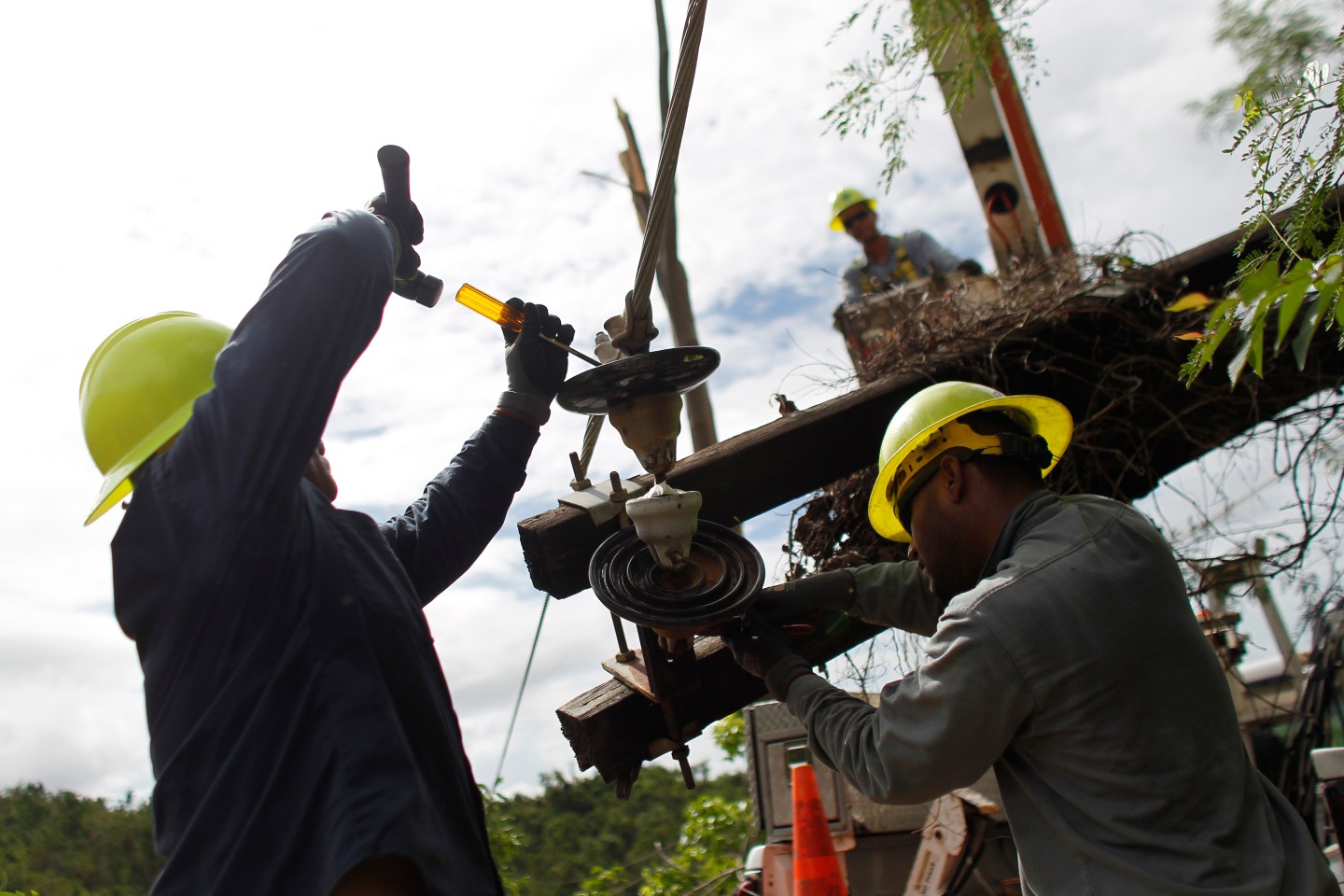 Puerto Rico‘s governor said on Monday he intends to sell off its troubled power utility to the private sector, saying the process could take roughly 18 months to complete.

The Puerto Rico Electric Power Authority (PREPA) has yet to recover fully from the devastation wrought by Hurricane Maria, which in late September knocked out power to the entire island and left all 3.4 million residents of the U.S. territory in the dark and killed dozens of people.

Less than 64% of homes and businesses are receiving power, according to the latest data from the U.S. Department of Energy. PREPA had promised that most of the island would have power by the end of December. The new plan calls for 30% of power generation to be through renewable sources.

Rossello described how the process for breaking up the company would occur in three phases, calling it a move toward a “consumer-centered model.”

Phase one consists of defining the legal framework via legislation. Phase two will be evaluating bids, and phase three will be “the terms of awarding and hiring the selected companies that meet the requirements for the transformation and modernization of our energy system will be negotiated.”

Given PREPA is currently trying to work its way through bankruptcy and all of the island’s financial dealings must go through the federally appointed Financial Oversight and Management Board for Puerto Rico, selling off PREPA‘s assets could be a long process.

Rossello highlighted how the island’s electrical grid, which was severely dilapidated even prior to the storms, was obsolete and working off of a generation system that was 28 years older than the average electric power utility in the United States.

Proceeds from the sale of assets and contracts would be “used to capitalize the retirement funds of employees,” Rossello said.

PREPA has been hampered by years of under-investment, frequent turnover in management and inefficient collections that forced it to go deeply into debt. The utility incurred about $9 billion in debt before declaring bankruptcy in July.

An ad hoc group of investors holding much of the utility‘s $9 billion in bonds had no immediate comment.

Last September after Hurricane Maria PREPA rejected a $1 billion loan and a discount on a portion of the existing debt offered by its creditors.

The utility was criticized for its restoration efforts, particularly its now canceled $300 million contract with tiny Montana-based Whitefish Energy Holdings which was obtained without competitive public bidding.

The Oversight Board did not have an immediate comment when contacted by Reuters. Attempts to reach PREPA‘s corporate offices were unsuccessful.

PREPA Board members contacted by Reuters had not heard of the Governor’s suggested privatization of the company. However, because the matter was still a preliminary idea, the board members reached by Reuters declined to comment.

One analyst was skeptical of Rossello’s plan.

“He’s got no energy plan, no financial analysis, if he thinks he’s going to sell it off and the private sector is going to come in and invest, that is a recipe for Puerto Rico being raked over the coals by private interests,” Tom Sanzillo, director of finance for the Cleveland, Ohio-based Institute for Energy Economics and Financial Analysis.

“This will produce a maximum amount of corruption and a minimal amount of electricity,” said Sanzillo whose organization has provided expert witnesses to proceedings of Puerto Rico’s Energy Commission.