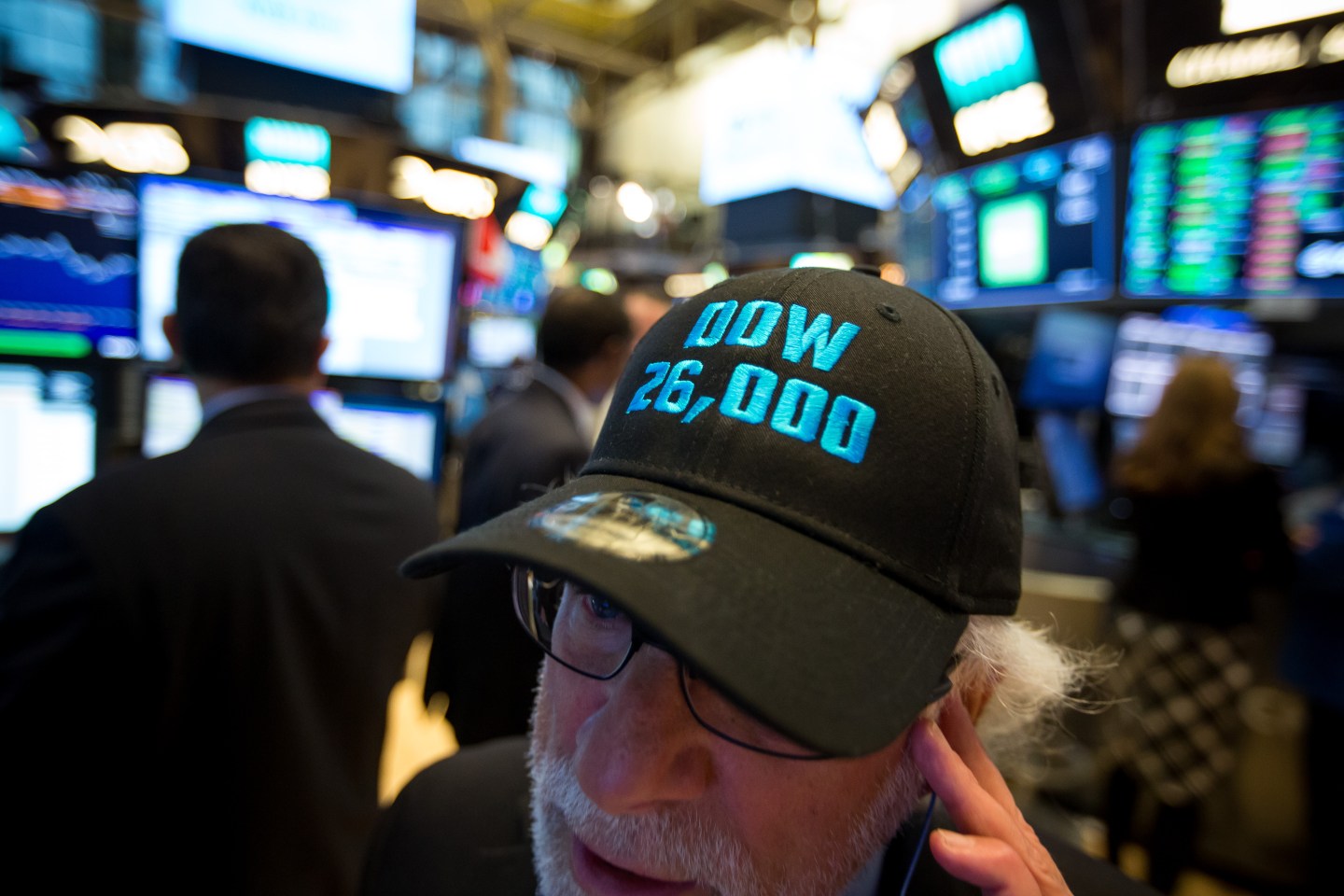 When stocks rocket to new records daily, it’s incredibly tempting to dismiss “CAPE Fear.” And the pros on Wall Street are unleashing every new age theory than can conjure to undermine its validity. The naysayers are wrong. Here’s why the CAPE—cyclically-adjusted price-to-earnings ratio—should indeed instill if not terror the deepest skepticism.

For decades, top value investors and market brainiacs have embraced the highly-regarded CAPE index as one of the most reliable yardsticks for weighing under versus overvalued markets. CAPE fans include Rob Arnott of Research Affiliates, Jeffrey Gundlach of DoubleLine, and John Hussman of Hussman Funds.

But now, the bull market’s precedent shattering power and momentum has shaken the faith of one of its staunch supporters, the bubble-unmasking dean of deep value investing, Jeremy Grantham of GMO.

In letters to investors in mid-2017, Grantham stated that “this time, things seem very, very different,” arguing that the extremely high CAPE ratio wasn’t just a flagrant sign of prices gone wild, its signal in the past, but a reflection of sustained, unusually high rates of earnings growth driven by “increased monopoly, political, and brand power.”

But Vitali Kalesnik of Research Affiliates, a firm the oversees investment strategies for $200 billion in mutual funds and ETFs, rejects Grantham’s view that high valuations are here to stay, along with the growing perception that the CAPE is busted. “Grantham’s argument that monopolistic and brand power made companies extremely profitable is a good description of the past,” Kalesnik told Fortune. “But projecting the theory into the future is very dangerous. The CAPE isn’t projecting high earning growth from here, it’s projecting what it always projects from these levels, low returns in the future.”

Along with Research Affiliates’ colleagues Arnott and Jim Masturzo, Kalesnik presents the pro-CAPE manifesto in an article entitled “CAPE Fear: Why the Cape Naysayers are Wrong.” Before examining his arguments, it’s important to understand the CAPE methodology. Developed by Yale economist Robert Shiller, it uses not current earnings-per-share as the denominator, but a ten-year average of inflation-adjusted EPS. Smoothing earnings eliminates spikes and valleys that can temporarily make PEs look artificially cheap (spikes or unsustainable runs) or too pricey (the financial crisis collapse).

As its most ardent advocates have long acknowledged, the CAPE’s role isn’t calling turning points in the market. On the contrary, it’s a tool designed to forecast future returns–what returns are likely to follow over, say, the next ten years, depending on the starting CAPE. Put simply, when the starting CAPE is extremely low, future returns can surge into the double-digits. And when today’s CAPE is highly elevated, gains over the next decade tend to be piddling, a pattern that repeats itself with remarkable consistency.

But here’s the latest reason the bulls hate the CAPE. The CAPE’s been flashing excess valuation for a long time; let’s pick the month it crossed 27: August 2016. If investors had sold at a CAPE of 27, they would have missed a 28% gain over the subsequent 18 months.

Does that mean the CAPE is now worthless in its true role as a forecaster of future returns? Quite the contrary, says Kalesnik. He begins by acknowledging a factor that could indeed justify a higher-than-average CAPE. It’s well known that the market value of a group of stocks consists of the discounted present value to the future EPS. The discount rate is the sum of two factors, the risk-free interest rate, and and equity risk premium. The latter reflects whether investors view the future as risky or secure. “Now, we have low earnings volatility, low GDP volatility, and low interest rate volatility, so investors view things as extremely safe,” says Kalesnik. That perception of a placid, predictable, low-risk investment climate accounts in large part for the slender discount rate.

The second contributor is low “real” interest rates. Though its risen recently, the real yield on the ten year Treasury hovers below 1% (the 2.48% rate, minus projected inflation of at least 1.5 points), an extremely favorable number by historical standards.

Still, to generate the kind of sustained high-single-digit to low-double-digit returns the bulls are flogging, the market would need to at least maintain its incredibly high current CAPE multiple—even true believers struggle to argue that multiples should expand—and rely a continuation of powerful EPS expansion. We’ve all heard the pitch: This is an earnings driven rally, and the best is yet to come.

But is it? Kalesnik cites several reasons why the “new era” of earnings is a myth.

Kalesnik states that although total earnings track GDP over long periods, earning-per-share trail by a wide margin. “It resembles the difference between GDP and GDP per capita, which expands a lot more slowly than total national income,” he says. Earnings are constantly being diluted by two factors. The first applies to existing public companies. These players float secondary offerings to fund new investments, and their managers regularly exercise grants of options and restricted stock that become newly-traded shares. Second, private companies “go public” via IPOs, spreading total profits in the economy, as well as earnings in individual sectors, over a larger and larger base of shares. Because of the widespread dilution, Research Affiliates reckons that since 1871, EPS has risen around 1.5% a year in real terms, lagging total earnings by around 2 points.

It’s one of the most basic rules in economics: Reversion to the mean. When a trend seems to defy economic gravity, it not only returns to normal, but frequently underperforms in the subsequent period.

According to Research Affiliates’ findings, the rule reliably applies to EPS. Long periods of fast EPS growth are usually followed by extended stretches of sub-par performance. Over the period from 1871 to October of 2017, Research Affiliates found that on average, after EPS had expanded by 10% a year in real terms for a decade, it posted 0 annual increases over the following 10 years. And horrible stretches of 5% earnings declines gave way to glorious interludes of 4.5% expansion.

From another perspective, it’s pretty well acknowledged by economists that total earnings (from which EPS are derived and on which they depend) can’t in the long-term outpace the overall economy. Yet earnings as a share of national income have surged to near records, hitting 9% in recent years, 50% over their pre-2008, long-term average of 6%. “It’s hard to argue that earnings can rise a lot from those levels,” says Kalesnik.

IF THE CAPE REFLECTS “THE NEW NORMAL,” WHY IS THE U.S. SUCH AN OUTLIER?

An extremely elevated CAPE is mainly a U.S. phenomenon. While our investors are paying $33 for $1 in earnings, Canadians pay $20, Germans $19, and the British $14, and that’s not counting many emerging markets in the low teens.

To explain why this big gap in valuations isn’t a sign of over-valuation, the CAPE’s critics cite lots of individual issues in these nations that make them riskier bets than the U.S., such as looming Brexit in the U.K. and Germany’s uncertainty regarding future leadership. Those arguments ignore substantial risk of exploding federal debt here at home. And many nations share the same characteristics that are supposed to be holding discount rates so low in America, aging populations obligated to accumulate savings (Japan and Germany), as well as low interest rates and smooth economic expansion, practically worldwide phenomena.

THE REAL TAKEAWAY: THE CAPE MEANS WHAT IT ALWAYS MEANS, NOT WHAT WALL STREET CLAIMS

“When discount rates are extremely low, like they are today, it indicates that future returns will also be low,” says Kalesnik. Indeed, folks are willing to accept lower returns if those returns are perceived as more certain. That translates into a low equity risk premium.

But a low ERP anticipates not unusually high returns, but unusually low gains. That’s not what the bulls are selling. “What they’re really saying is that the high CAPE is projecting a continuation of extremely high earning growth going forward,” says Kalesnik. “But the CAPE isn’t saying that at all. The CAPE is saying that returns will be very low over the next ten years. It’s making exactly the same prediction as the low discount rate.”

CONCLUSION: HOW LOW ARE FUTURE RETURNS LIKELY TO BE?

It’s important to stress the CAPE’s terrific record in predicting returns over long periods. When investors start at a modest CAPE of 16, they’re rewarded, on average, with 10% annual gains over the next decade. By contrast, starting in the low 30s drives future gains under 5%. The strongly negative correlations between today’s CAPE and future returns also applies to all countries Research Affiliates studied, including Australia, Canada, Germany, and Japan.

Kalesnik devised a model showing what investors will face even if a modest return-to-normal takes hold. Say the CAPE retreats from today’s 33 to 23, retracing halfway to its historic average. EPS would rise at the typical rate of around 1.5% in real terms. Dividends would add another 1.8% or so. But the constant descent of the CAPE from 33 to 23 would generate a headwind of around 2.8% a year. Investors would be left with annual gains, net of inflation, of around half a point a year.

The CAPE is a kind of unchanging lodestar for the markets. Its integrity is its remarkable track record. Right now, it means to scare you, and with good reason.