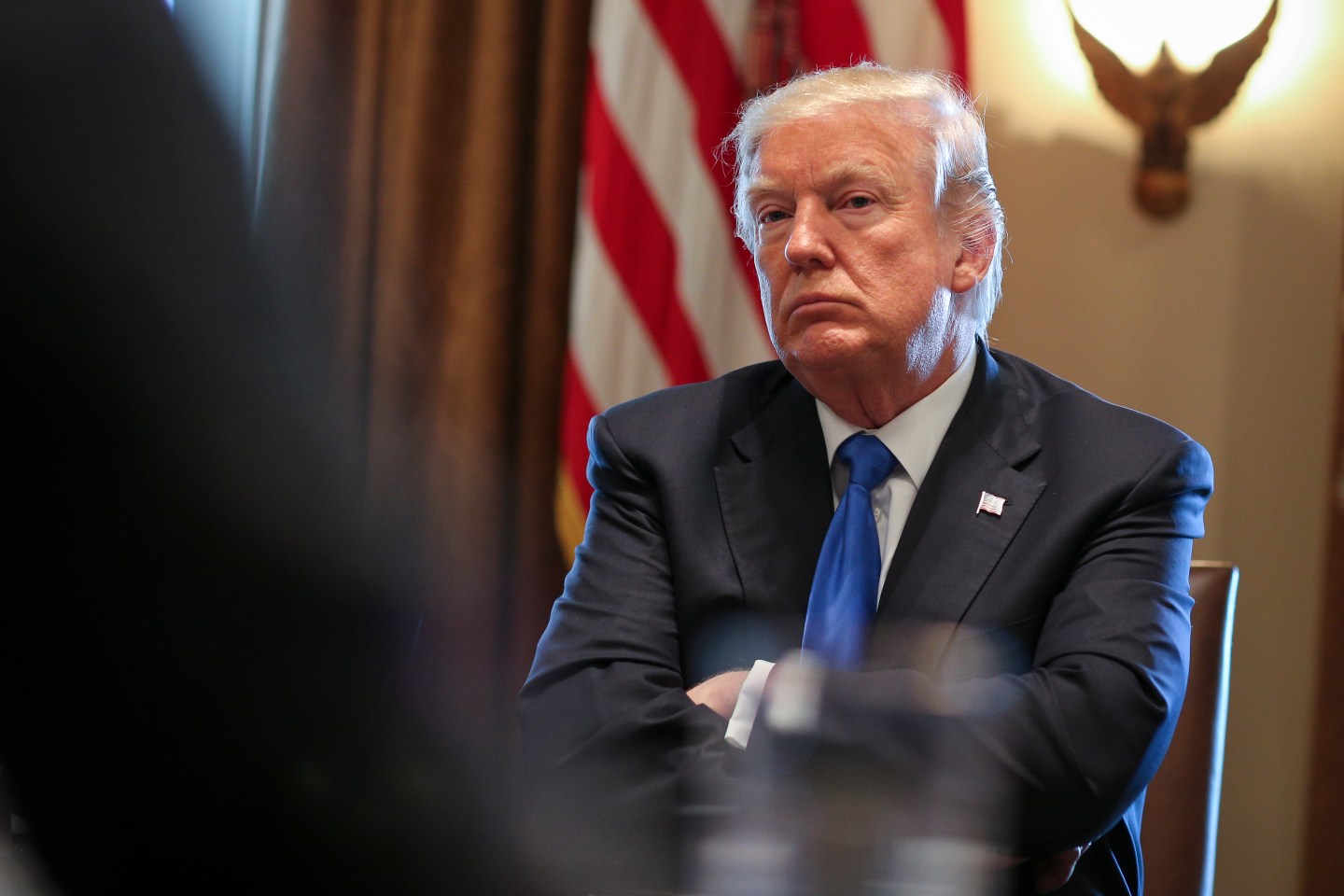 Miller is widely viewed in the Senate as an obstacle to a deal who’s supplied the president with an unrealistic expectation of what Democrats would accept, according to three people familiar with the talks.

The unraveling of the potential compromise further stokes concerns about Trump’s unpredictability as a negotiator and his impulse to rapidly reverse course. House Republicans backed Trump on an Obamacare repeal last year only to see him turn around and denigrate the bill as “mean.” He abandoned Republican leaders in the middle of an Oval Office meeting in September to strike a budget deal with their Democratic counterparts.

Only this time, the ensuing blow-up is raising the risk of a government shutdown that could come as soon as the end of the coming week.

Miller is providing Trump advice that’s tone-deaf on how emotionally invested Senate Democrats are on immigration, said a person familiar with the talks. That, in turn, is feeding a misunderstanding that concessions on spending will buy a better deal on immigration, the person added.

Trump, who vacillated between more moderate proposals on Tuesday and a hard-line stance by Thursday, further derailed the negotiations with a vulgar insult to immigrants from certain countries.

Trump’s comments — describing places such as Haiti and African nations as “shithole” countries — consumed the news cycle Friday and sparked bipartisan condemnation, all but killing any sense of optimism that a deal could be struck soon to avoid a shutdown of the federal government.

“My thought that we might get a bipartisan agreement approved by the White House died yesterday,” Illinois Senator Dick Durbin told reporters Friday. Durbin added that Trump used “hate-filled, vile and racist” language during the Thursday meeting at the White House to discuss a potential deal.

Taking to Twitter on Friday, Trump disparaged the bipartisan proposal backed by three Republican senators and three Democratic senators as a “big setback” to a potential immigration deal and issued a vague denial of the vulgar comments. Early Saturday, Trump criticized Democrats in a tweet as “all talk and no action.”

The president is spending the weekend at his club in Florida. In another tweet on Saturday he noted Friday’s “big day for the stock market” and the benefits of the Republican tax-cut law signed in late December. “American business is hot again!” Trump said.

Trump’s mercurial approach has flummoxed lawmakers and advocates on both sides of the immigration debate, leaving stakeholders unsure about where he stands.

“If the president were consistent in his positioning in this, it would give the Republicans cover” on a deal, said Theresa Brown, director of immigration policy at the Bipartisan Policy Center in Washington. “But he has not so far on many issues demonstrated the kind of consistency of viewpoint that would actually provide that cover.”

Durbin sat next to Trump on Tuesday, at a bipartisan meeting of lawmakers seeking to reach an agreement to provide some protections for participants in the Obama-era Deferred Action for Childhood Arrivals program shielding some young undocumented immigrants from deportation.

During the televised meeting, Trump spoke of wanting a “bill of love” and appeared to endorse a “clean DACA” legislation sought by Democrats. He said he would favor “doing DACA first” before moving to “comprehensive immigration reform,” and touted the virtue of a “path” to citizenship for undocumented workers.

Trump said he would accept any deal that the bipartisan group came up with and would not reject it due to reservations about certain provisions. After the meeting, the White House said Trump wanted a deal to include funding for border security, limitations on family-based immigration and an end to the diversity visa lottery program.

Taking those cues, a bipartisan group of six Senate lawmakers hashed out a deal that addressed those issues and provided legal protections for undocumented immigrants who were brought to the U.S. as children without proper authorization.

Durbin and Senator Lindsey Graham, a South Carolina Republican, each spoke to Trump during phone calls Thursday morning to outline the contours of the deal, according to a Democratic congressional aide who requested anonymity to discuss the internal deliberations.

On the phone call, Trump was receptive toward the deal and Durbin and Graham headed to the White House to further brief the president, the aide said.

When they arrived, they were surprised to see several Republican lawmakers, including immigration hardliners like Cotton and Representative Bob Goodlatte of Virginia, the chairman of the House Judiciary Committee.

Cotton, Goodlatte and the White House said the deal was a non-starter in part because it did not eliminate family-based migration for extended family members. The proposal Graham and Durbin brought included restrictions on what conservatives call chain migration but only for relatives of DACA recipients.