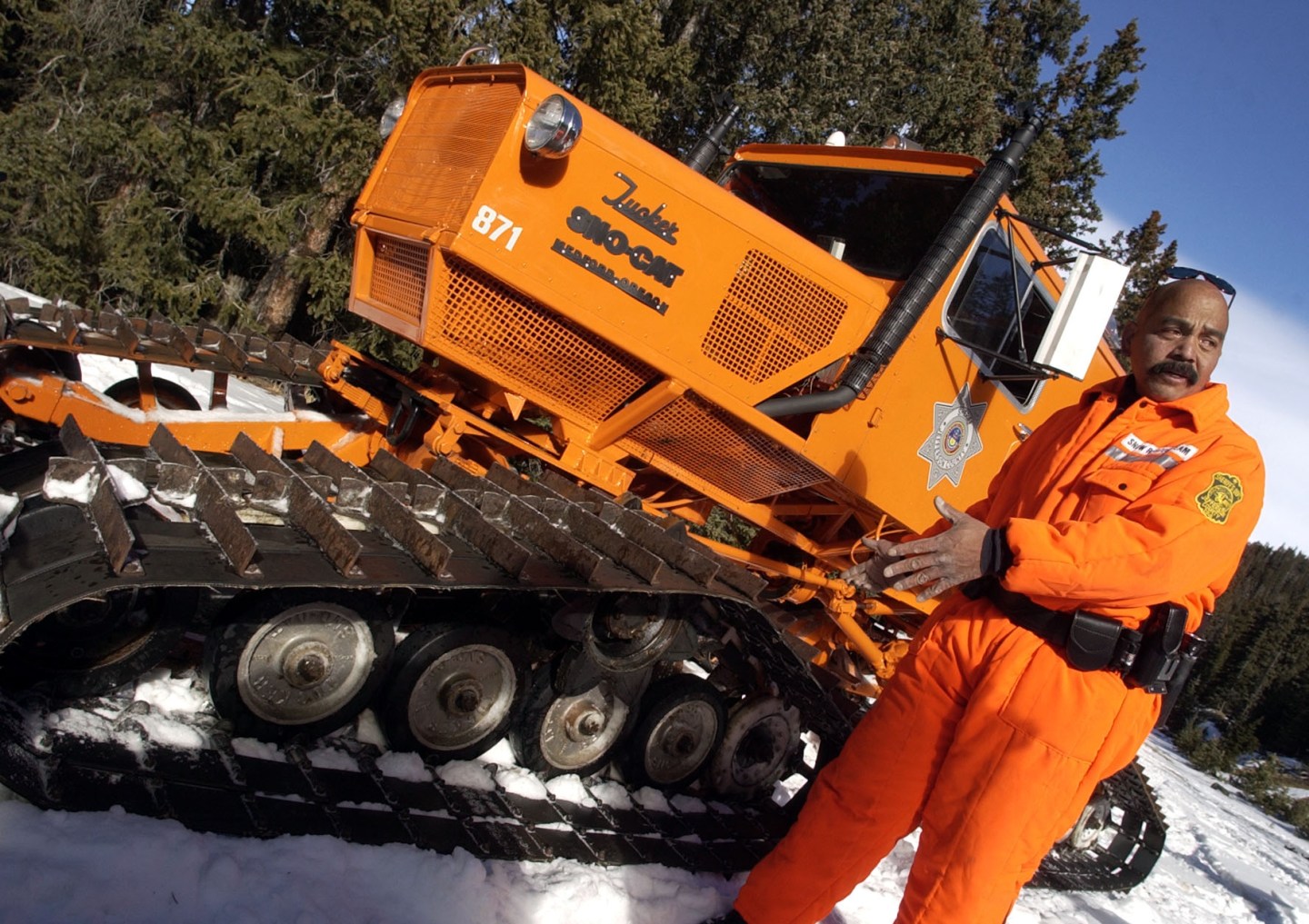 EVERGREEN, CO, DECEMBER 1, 2003 - Deputy Mike Sensano drives the Jefferson County Sheriff's 12-person Sno-Cat at Squaw Pass on Monday. The office has bought the Sno-Cat (the old one seated 4 people) for a fraction of the usual price. ($40,000) During last March's monster blizzard, the Jefferson County Sheriff's Office Sno-Cat threw a rod, toasting the engine, as deputies responded to rescue calls, delivered medicine and performed other services for people snowbound in the foothills. (THE DENVER POST PHOTO BY HYOUNG CHANG) (Photo By Hyoung Chang/The Denver Post via Getty Images)
Hyoung Chang—Denver Post via Getty Images

Way back in the snow-choked mountains, miles from any road, curb appeal is still a thing.

Consider the Tucker Sno-Cat. It sits on four treads, seemingly designed for a tank, that nevertheless appear to float atop fluffy snow that’s swimming pools-deep. The cab is painted an industrial orange that contrasts cartoonishly against the cottony landscape. A Tucker, like all great vehicles, is a cross between a serious machine—purpose-built for a job—and a child’s toy. It’s difficult to look at one and not feel an urge to climb inside, crank up the heater, and drive somewhere or, rather, nowhere in particular.

Mark Abma, a professional skier who lives in British Columbia, knows that feeling well. For years he experienced it every time he’d swing by his buddy’s welding shop and glance at the old Tucker rusting away in the back lot. Abma travels most of the year and is one of very few people paid to ride around in helicopters hunting fresh powder, yet he committed much of last winter to resurrecting the long sleeping snowcat. “I’d been asking for 10 years what it would take to get it running,” he says. “We finally decided to make a go of it.”

With the help of several unpaid volunteers, Abma spent five months—almost 800 man-hours—refurbishing the 48-year-old machine. Now, when he isn’t flying into some remote spine of snow in Alaska, Abma cranks up his Tucker, drives up a snow-packed ravine, and spends his days hiking up and skiing back to the ’cat. He has a tent bolted to the roof, so he can spend the night, and eight tow ropes rigged up, so his buddies can be dragged behind like a surreal troupe of winter waterskiers—though the 1969 snowcat tops out at 5 mph.

“It’s kind of a mobile base camp,” he says. “It’s definitely not about trying to get anywhere fast.”

Abma, it turns out, is not alone in his ardor. Demand for Tucker Sno-Cats—both new and used—is peaking, thanks to affluent landowners, classic collectors, and gearheads with a love of snow. In the world of transportation, this is one of the most fascinating niche markets at the moment.

Tucker is celebrating its 75th year cranking out snow machines from its headquarters in Medford, Ore. It’s best known for outfitting the first overland crossing of the Antarctic in 1957. Four of its machines made the trip under the command of Vivian Fuchs, navigating through brutal cold and several dicey situations.

Over the years, Tucker’s rivals either went out of business or slowly evolved their vehicles for ski resorts that needed to comb out acres of corduroy runs. Treads got wider and heavier. Tucker, however, didn’t go that route: It stuck to making machines with four narrower treads that articulate to drive independently, perching on the snow like an agile animal. (Hence, the “cat” moniker.) On most of its machines, including Abma’s, the treads wrap around hollow pontoons made of steel or fiberglass, so the rigs float on powder like a party boat on a lake. As such, Tuckers are best suited to traveling over snow, rather than tamping it down, which has turned out to be a useful hedge against global warming and the economic downturns that buffet the global ski industry.

Today the company makes 50 to 100 machines a year and is run by Marilee Tucker Sullivan, granddaughter of founder E.M. Tucker. “We’re a niche company,” Sullivan says, “and it’s worked out quite well for us.”

Tucker’s best customers include the U.S. military, oil drilling crews in Alaska and North Dakota, and utilities that need to service snow-blitzed power lines. This year, Tucker drew almost $600,000 in government contracts, including an order to service seven of its machines at the U.S. Marine Corps Mountain Warfare Training Center in California’s Sierra Nevada.

The fastest-growing group of customers, however, is private landowners who want to get to their mountain retreats in style. Snowmobiles, after all, are cold and relatively crappy for listening to classical music. “It’s a great market for us, and we’ve definitely noticed a spike this year,” says John Meilicke, the company’s sales manager.

“From there, I tell my customers, the sky’s the limit,” Meilicke says. A few months ago, a customer with a spread near California’s Lake Tahoe ordered a Tucker in Ferrari red. Meilicke was happy to swap out the company’s trademark orange, for a price.

The smart money is arguably on the older machines, which are more affordable and appreciating quickly. The company often built machines to custom specifications and kept poor records, so there is no telling how many vintage Tuckers are rusting away in barns and weed-choked lots. The number, though, is low; Meilicke estimates a couple thousand, at most.

Jesse Cook, who runs an auto shop near Portland, Ore., owns 10 of them in various states of resurrection. Cook has lots of practice fixing and flipping cars, but he can’t quite bring himself to sell one of his Tuckers. “It’s definitely a sickness,” he says. “If you’re in the Tucker world, they say, ‘You’ve been drinking too much orange Kool-Aid.’”

Cook uses all of his machines, towing them up to the logging roads around Mount Hood and driving off into the wilderness. “It’s like a mix of everything I love together,” he explains. “I love the build, the restoration, and I love winter.”

The downsides: Tuckers tend to be noisy, get abysmal gas mileage, and are extremely hard to track down.

The scarcity, in part, has fueled demand. Cook says values for vintage Tucker Sno-Cats have tripled in the past five years, with prices ranging from $10,000 for a rust-frozen heap to well above $100,000 for a fully restored rig. The most-coveted models include the so-called “rock ‘n’ roll” machines that crossed the Antarctic.

Tucker is cashing in on its history as well. Three years ago the company started a service reselling and refurbishing old machines. Headed by Jeff McNeil, the founder’s great-grandson, it has become one of the company’s most profitable lines of business.

Meanwhile, two secretive collectors have cornered the market. The Tucker fraternity won’t divulge their names but suspect the men have amassed more than 200 vintage Tuckers.

“They are more precious to them than cars,” McNeil says. “They are fanatics.”

Refurbishing a Tucker is easier than one might think. The engines were sourced from various places over the years, but Tucker favored Chrysler’s flat-head six-cylinder, which is still easy to find. Larger Tuckers were bolted to big, eight-cylinder Dodge hemis, another engine produced en masse. Cabins were similarly simple, aluminum pods that approximate the fuselage of a World War II bomber. Would-be buyers, however, should look carefully at the tracks and pontoons. The fiberglass tends to crack, and replacing a full set of rollers can cost $12,000.

“They are the Cadillacs of the industry,” McNeil says. “But you still have to keep in mind, they are essentially tractors.”

When McNeil isn’t working in the shop, he spends much of his time on Google Earth, hunting satellite footage for vehicles his ancestors made decades ago. “Sometimes you can see them sitting in yards, abandoned,” he says. “Then you just start calling people to see if they are interested in selling them.”