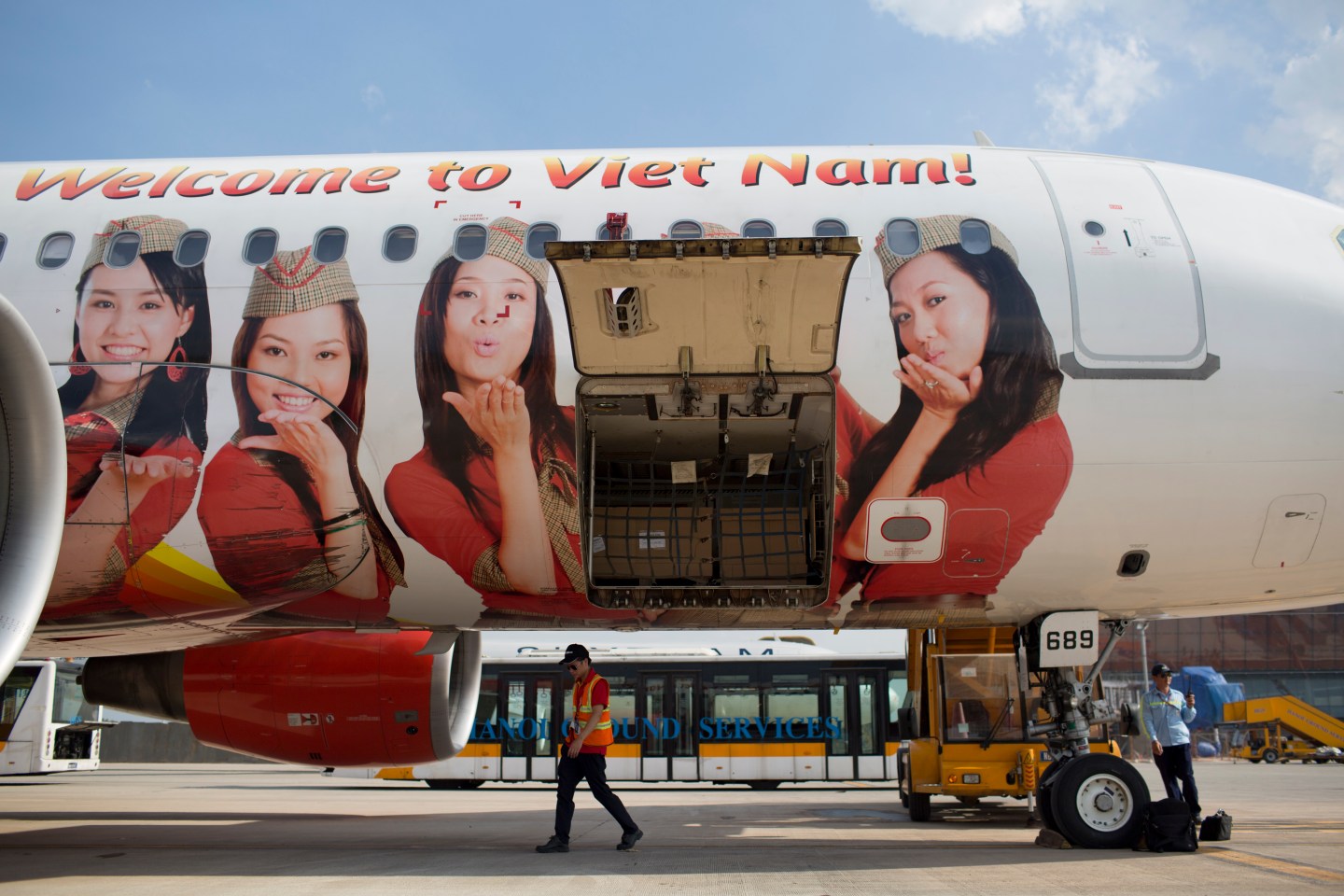 An employee walks under a VietJet Air aircraft, operated by VietJet Aviation Joint Stock Co., at Noi Bai International Airport in Hanoi, Vietnam, on Sunday, June 1, 2014. VietJet, Vietnam's only privately owned airline, may seek to raise $400 million to $500 million in an initial public offering next year as it takes delivery of as many as 100 additional planes. Photographer: Brent Lewin/Bloomberg via Getty Images
Brent Lewin—Bloomberg via Getty Images

Vietnam’s VietJet Aviation said on Thursday it was standing by a controversial “bikini” calendar, a marketing ploy featuring scantily clad female models that has prompted criticism in conservative Southeast Asia and beyond.

The annual calendar, which has gone viral online, is part of a broader marketing push by VietJet that has propelled the start-up airline’s rapid growth, as it has taken market share from Vietnam Airlines.

The publication of the 2018 calendar—which critics say overly sexualizes the image of flight attendants and other airline staff—comes as there is a growing debate in the global airlines industry about sexual harassment and in-flight assault of both passengers and employees.

VietJet, founded by Nguyen Thi Phuong Thao—Vietnam’s first female billionaire and one of a handful of women running a major airline globally—said the calendar emphasized free choice of people to wear whatever they wanted.

“We are not upset when people associate us with the bikini image. If that makes people delighted and happy, then we’ll be happy,” Luu Duc Khanh, VietJet’s managing director, said in emailed comments to Reuters.

When asked about the views of Thao, Khanh said the CEO thought people “have the right to wear whatever they like, bikini or traditional ao dai,” referring to the traditional Vietnamese long dress.

Thao was unavailable for interview.

The calendar has caused an online storm in Vietnam, with some people criticizing and others defending the campaign. The 2018 calendar and a YouTube video of the photo shoot have been viewed more than 910,000 times since first appearing at the end of last month.

“I think (the calendar) is beautiful, not unpleasant at all,” one user posted on Facebook under the avatar Mai Co. Another person, named as Van Nhi, said the airline was “creating scandal to gain attention. It’s getting more unpleasant.”

Critics say VietJet’s risqué marketing, including the calendar and bikini fashion shows on board planes, presented an archaic and sexist image of cabin crew, even as the risk of harassment and assault go widely underreported.

VietJet is “taking us back 50 years by hyper-sexualizing a female dominated work group in order to make a few bucks off a couple of cheesy calendars,” said Heather Poole, a veteran U.S. flight attendant and author of a book about working the not-always-friendly skies.

“Women have to work so hard to be taken seriously, and in this case it’s a woman in charge taking us back to the days of ‘Coffee, Tea or Me?’,” she added, alluding to a 1960s book about two fictitious female flight attendants that emphasized their sexual appetite.

VietJet is not the first firm to use racy calendars to raise its profile. Italian tire maker Pirelli—known for its calendars of glamorous female models—has overhauled the annual offering in recent years with less of a focus on nudity.

Khanh, who said the proceeds from sales of the VietJet calendar go to charity, acknowledged that there could be big changes in the content for the next version.

“Male models is a good idea for us to introduce in our calendars next year,” he said.