How the U.S. Used Jazz as a Cold War Secret Weapon 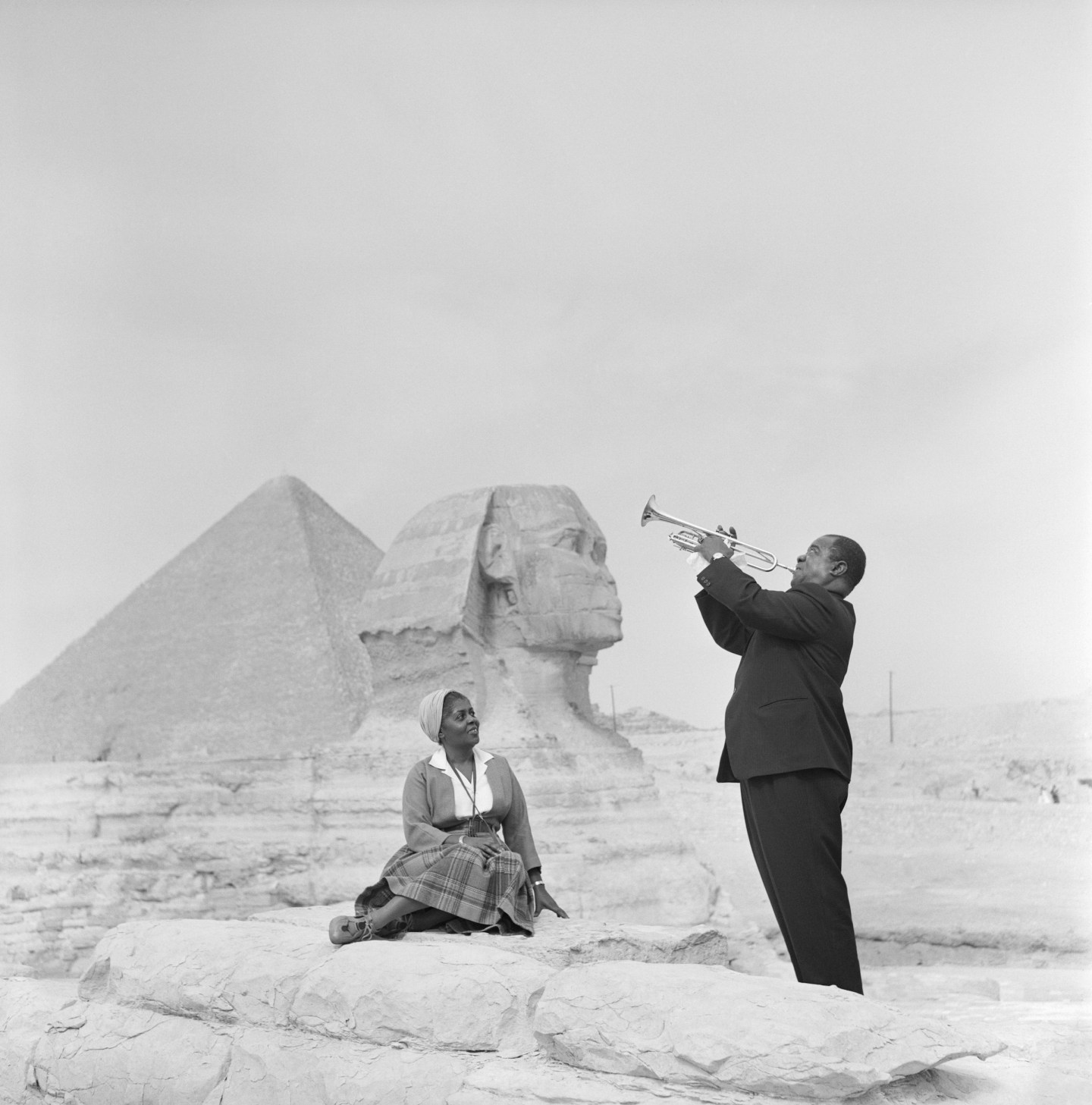 American jazz trumpeter Louis Armstrong plays the trumpet while his wife sits listening, with the Sphinx and one of the pyramids behind her, during a visit to the pyramids at Giza.
Bettmann Archive

Almost exactly 60 years ago, in the crisp, early spring of 1958, a young boy from California named Darius shuffled through the streets of Warsaw. He shivered; it still felt like winter, and snow frosted the bullet holes that peppered the city’s buildings, a stark reminder that the Second World War had concluded little more than a decade previously. Poland was in Russia’s sphere of influence, and Darius was there as part of a mission orchestrated by the U.S. State Department. His brief: to gain exposure to foreign cultures, and not cause any trouble.

This moment was a new experiment in what is known as “cultural diplomacy.” Darius was tagging along because his father, the famous pianist Dave Brubeck, was a jazz ambassador.

The State Department hoped that showcasing popular American music around the globe would not only introduce audiences to American culture, but also win them over as ideological allies in the cold war. The Brubeck Quartet’s 12 performances in Poland were some of the first in a long tour that would never stray far from the perimeter of the Soviet Union. They passed through Eastern Europe, the Middle East, central Asia and the Indian subcontinent. Other tours would allow jazz legends like Louis Armstrong and Dizzy Gillespie to trumpet American values in newly decolonized states in Africa and Asia. The idea was always the same: keep communism at bay by whatever means possible.

In Poland, audiences were used to more formal, Soviet-approved culture like ballet and opera. Early jazz had flourished in the country in the 1930s, but after the Soviet takeover following the end of the war, jazz was forbidden from the airwaves, believed inferior to the high arts that had government support. An underground scene resisted this repression; they tuned in, when they could, to “Jazz Hour,” a shortwave radio show broadcast by Voice of America. Brubeck’s performances — the first of any American jazz band behind the iron curtain — were an exceedingly rare opportunity for Poles to see jazz played live.

The response to Brubeck’s first concert, performed in Szczecin on the border between Poland and East Germany, was rapturous. “It was uplifting and heartbreaking at the same time,” Darius Brubeck, now in his 70s, tells TIME. “Our whole era of propaganda and demonization just evaporated in seconds.”

His father, who was moved by the dedication of Polish jazz fans, would often address the crowd at his performances. “No dictatorship can tolerate jazz,” he said. “It is the first sign of a return to freedom.”

The State Department had first realized jazz’s potential as a cold war weapon just three years before the Brubeck family found themselves in Poland. “In that moment, the U.S. and the USSR both saw themselves as models for developing nations,” says Penny Von Eschen, a professor at Cornell and an expert on the jazz ambassador program. “They were in fierce competition to win the hearts and minds of the world.” Adam Clayton Powell Jr., a congressman with close ties to the jazz community, first suggested sending jazz musicians around the world on state-sponsored tours in 1955. No time was wasted, and by 1956 the first jazz ambassador, Dizzy Gillespie, was blowing America’s horn in the Balkans and the Middle East. “America’s secret weapon is a blue note in a minor key,” proclaimed the New York Times.

The music of jazz, which was structured around improvisation within a set of commonly agreed-upon boundaries, was a perfect metaphor for America in the eyes of the State Department. Here was a music of democracy and freedom. What the bands looked like was important too. “The racism and violence within the U.S. was getting international exposure,” says Von Eschen. “For President Eisenhower and his Secretary of State, John Foster Dulles, this was a great embarrassment.” By sending bands comprised of black and white musicians to play together around the world, the State Department could engineer an image of racial harmony to offset the bad press about racism at home.

“In the late 1950s, as the civil rights movement took hold, the violence intensified,” says Hugo Berkeley, the director of a new film, Jazz Ambassadors, premiering on PBS in the spring. The film shows how in 1957, in protest against the Little Rock crisis, Louis Armstrong cancelled plans for a State Department tour through the Soviet Union. It was not until 1961, when the civil rights movement had made significant headway, that Armstrong changed his mind, and agreed to tour Africa. “There was this feeling that a page was being turned in the political discussion of race,” Berkeley says.

Berkeley’s film sets out to answer the question of why black musicians chose to cooperate with the State Department’s mission of making a case for America as the greatest country in the world. “This question was clearly a paradox,” Berkeley says. “They were being asked to do this thing, but they didn’t feel good about the way their country treated African American people. The question is, how do they go to present a positive version of their nation at the same time?”

The first ambassador, Gillespie, was a black man who had grown up in the South, who had no illusions about the irony of promoting America’s ‘freedom’ abroad whilst remaining a second-class citizen at home. He refused to be briefed by the State Department before a performance. “I’ve got 300 years of briefing,” he said. “I know what they’ve done to us and I’m not going to make any excuses.”

When Dave Brubeck and Louis Armstrong returned home from their tours, they set out to tackle the ironies of the program in a musical titled The Real Ambassadors. The script was written primarily by Brubeck’s wife, Iola, who accompanied him and the children on the 1958 tour. She cast Armstrong as a version of himself, a jazz ambassador touring the globe. The story begins with him being mistaken for a real ambassador, which leads him to ponder his position. “Who’s the real ambassador?” Armstrong asks in a musical interlude. “Though I represent the government, the government don’t represent some policies I’m for.”

The musical was designed to “bring home the absurdity of institutionalized political racism in the U.S.,” says Darius Brubeck, reminiscing decades later. “To ask, how can we preach to the world about democracy, when we had a situation where the south was still segregated?” The musical was only performed once in public during the 20th century, at Monterey Jazz Festival in 1962, and then fell into relative obscurity. A flurry of activity recently suggests interest is growing again. Performances at high profile venues like Jazz at Lincoln Center in New York City, and interest from documentary makers like Berkeley, seem poised to throw the jazz ambassadors back into the limelight.

After all, it may not be too much of an exaggeration to say the jazz ambassadors could have saved the world. “The cold war was a militarized conflict, which was diffused by cultural exchange,” says Berkeley, between rushes of his documentary at a studio in London. “And you needed both of those, because if you didn’t have cultural exchange, the militarized conflict could get out of hand.”

Thirty years after the concerts in Poland, in 1988, Dave Brubeck was invited to soundtrack nuclear disarmament talks between Reagan and Gorbachev, in Russia. “That really did work, in terms of breaking the ice between the delegations,” Darius says. “It was something they could focus on, where they could just have some fun together and be human beings.” The Intermediate-Range Nuclear Forces Treaty was signed soon afterwards, limiting the possibility of a catastrophic nuclear war breaking out.

The spirit of the jazz ambassador program is still going strong, though most state funding has dried up. Now, a patchwork of initiatives are keeping the idea of cultural diplomacy alive, including institutions like the Fulbright program and the Institute for Cultural Diplomacy. Darius Brubeck remains a key advocate, carrying the flame of his father, who died in 2012.

Although Darius, his brother Mike and his mother Iola were forbidden by the State Department from following the quartet on the tour past Turkey, the experience stuck with him throughout his life.

“You can say that there’s an element of cultural imperialism, but it really was in the spirit of sharing,” he says. Now a professional pianist himself, he played in Poland a few years ago, and people who were at the concerts in 1958 came. Some were in their 90s.

“It wasn’t so much that they had to hear me play,” he says. “It was a way of demonstrating what it meant to them at the time.”