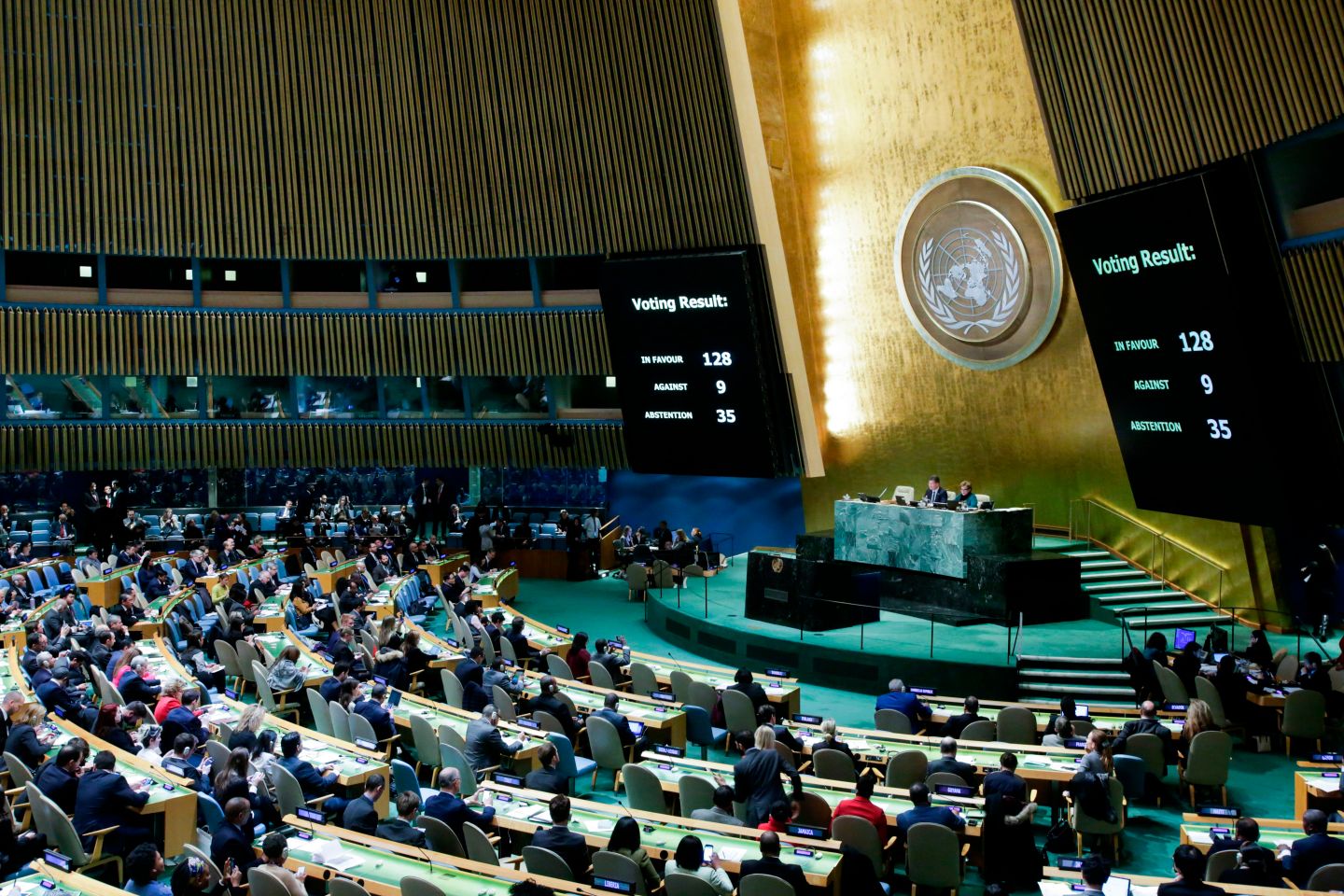 The results of the vote on Jerusalem are seen on display boards at the General Assembly hall, on December 21, 2017, at UN Headquarters in New York. UN member-states were poised Thursday to vote on a motion rejecting US recognition of Jerusalem as Israel's capital, after President Donald Trump threatened to cut funding to countries that back the measure. / AFP PHOTO / EDUARDO MUNOZ ALVAREZ (Photo credit should read EDUARDO MUNOZ ALVAREZ/AFP/Getty Images)
Eduardo Munoz Alvarez—AFP/Getty Images

The United Nations General Assembly on Thursday declared the U.S recognition of Jerusalem as Israel’s capital city “null and void.”

The legislative body voted 128 to 9, according to the Associated Press, with 35 abstentions.

U.S. president Donald Trump made his formal declaration of the policy change on Dec. 6. Previously the recognized Israeli capital was Tel Aviv, the location of the U.S. embassy.

Several world leaders warned Trump that the move would undermine peace efforts and spark violence. The decision to elevate Jerusalem in this way is provocative because the eastern sector of the city is also claimed by Palestinians as the capital of a future state. That area includes some of the holiest ancient sites to three major religions: Judaism, Christianity, and Islam.

“I make a heartfelt appeal so that all commit themselves to respecting the status quo of the city, in conformity with the pertinent resolutions of the United Nations,” Pope Francis I said in a statement made at the time. “I cannot keep quiet about my deep worry about the situation that has been created in the last few days.”

(For more on this subject, read Fortune senior editor Ellen McGirt’s excellent essay on the situation from her daily RaceAhead newsletter. For a different take, read commentary from Jonathan Schanzer.)

Congress passed a law in 1995 recognizing a Jerusalem as Israel’s capital, which would require the president to move the U.S. embassy to the city. But Trump’s predecessors—Obama, Bush, and Clinton—avoided doing so in the interest of peace, exercising a waiver allowing them to delay the move.

“The United States will remember this day in which it was singled out for attack in the General Assembly for the very right of exercising our right as a sovereign nation,” said Nikki Haley, the U.S. ambassador to the UN, in a statement after the vote. “We will remember it when we are called upon once again to make the world’s largest contribution to the United Nations. And we will remember when so many countries come calling on us, as they so often do, to pay even more and to use our influence for their benefit.”