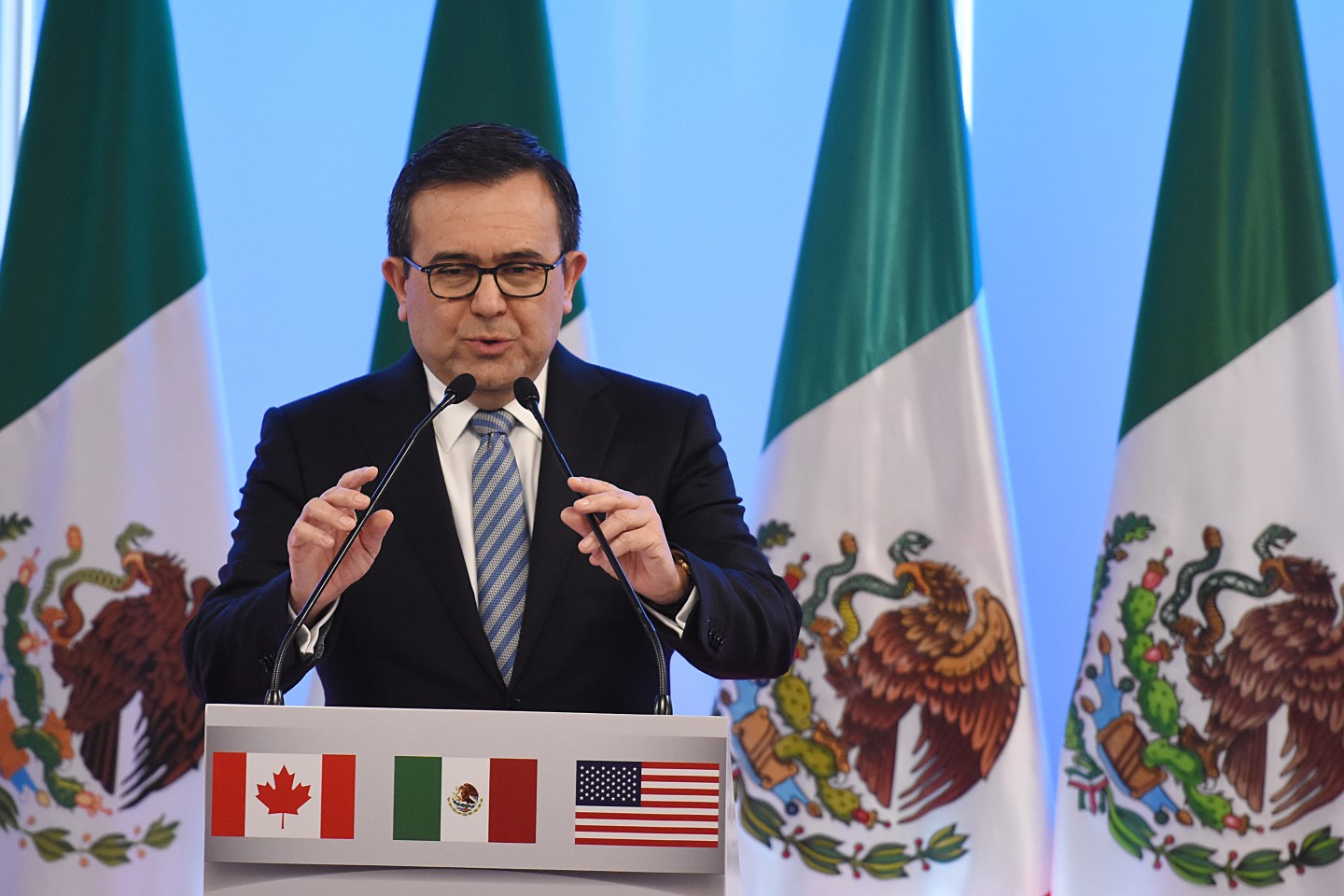 Ildefonso Guajardo Villarreal, Secretary of Economy is seen during his speech at meeting with the media as part of the Second Round of NAFTA Negotiations on September 05, 2017 in Mexico City, Mexico (Photo by Carlos Tischler/NurPhoto via Getty Images)
Carlos Tischler—NurPhoto/Getty Images

Mexican Economy Minister Ildefonso Guajardo said on Wednesday that demands by the Trump administration for a U.S.-specific automotive content requirement in NAFTA was “not viable,” and declined to specify when Mexico would formally respond.

At a news conference following a series of meetings with senior U.S. trade officials and lawmakers in Washington, Guajardo said that Mexico was still trying to understand the U.S. proposals that would require 50% of vehicles’ value content be produced in the United States as part of updated North American Free Trade Agreement rules.

“I was clear that the domestic content (requirement) is something that is not viable at this point,” Guajardo said.

He added that Mexico would eventually make a counterproposal on automotive rules of origin, but declined to specify the timing of that response.

His visit was partly aimed at bolstering support in Congress for NAFTA at a time when tax legislation is consuming lawmakers’ attention and U.S. Trade Representative Robert Lighthizer is growing frustrated with the slow pace of NAFTA talks.

U.S. President Donald Trump has repeatedly threatened to scrap the trade agreement if it cannot be renegotiated to shrink U.S. trade deficits and return manufacturing jobs to the United States.

House Speaker Paul Ryan said after meeting with Guajardo earlier on Wednesday that congressional Republicans “are determined” to strengthen trade ties with Mexico.

“I expect the administration will continue to work with us to modernize NAFTA and bolster our robust relationship with such an important ally,” Ryan said in a statement.

After the last NAFTA negotiating round ended last week, Lighthizer complained that Mexico and Canada had not offered counterproposals to its demands on autos and other major areas aimed at “rebalancing” the trade pact.

The United States also is seeking to lift the regional value content requirement forNAFTA-produced cars and trucks to 85% from 62.5%. Guajardo said that once Mexico has a firm understanding of the U.S. autos proposal, it can work with its own stakeholders to see what adjustments could be made to regional content for autos.

But he said that the U.S. demand to move to 85% regional content within three years was “entirely unrealistic.”

Guajardo said he discussed with Lighthizer on Tuesday how to move the talks towards consideration of potential “rebalancing” outcomes. But first, he said Mexico needed to be clear with its American and Canadian counterparts about unacceptable proposals and its priorities for keeping the pact beneficial to all parties.

“We have to start a process of looking at what’s next after we complete the modernization effort,” he added.

On dispute settlement, Guajardo said that Mexico would be willing to consider some adjustments to the investor-state dispute settlement system, after the United States proposed making the use of such arbitration panels optional.

“We can explore the opt-in, as long as we can define our own opt-in,” Guajardo said of the dispute settlement proposal, adding that otherwise, Mexico is “not interested.”

At a more limited round of NAFTA talks in mid-December in Washington, Guajardo said it was important to agree on key issues in order to close some NAFTA chapters such as those on food safety, telecommunications, regulatory practices, and digital commerce.