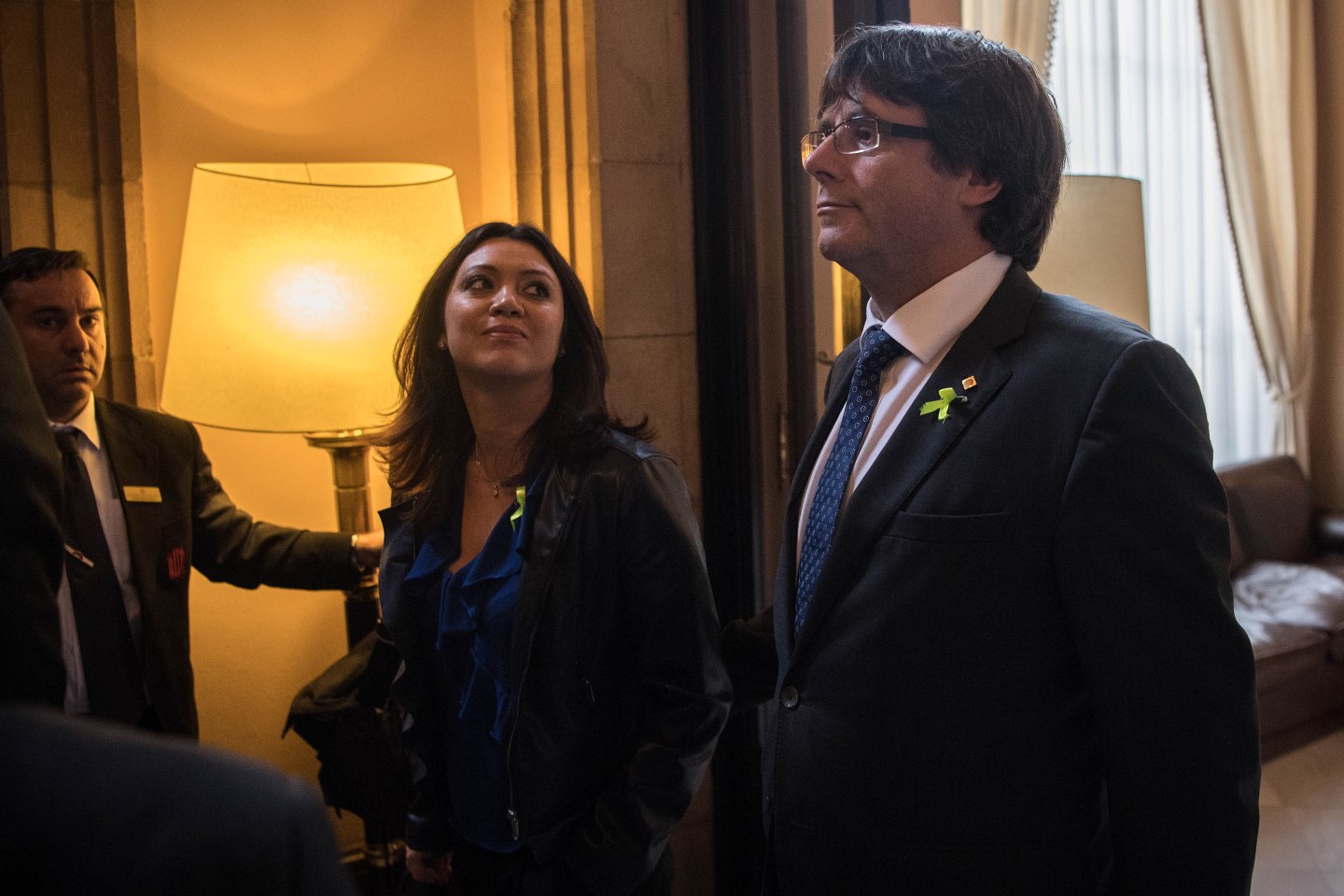 BARCELONA, SPAIN - OCTOBER 27: Catalan President Carles Puigdemont and his wife Marcela Topor leave the hall after the news that the Catalan Parliament voted in favour of independence from Spain on October 27, 2017 in Barcelona, Spain. MPs in the Catalan parliament have today voted following a two days session on how to respond the spanish governments enacting of Article 155, which would curtail Catalan autonomy. (Photo by David Ramos/Getty Images)
David Ramos — Getty Images

(MADRID/BARCELONA) – Sacked Catalonian president Carles Puigdemont on Saturday called for peaceful “democratic opposition” to the central government’s takeover of the region following its unilateral declaration of independence from Spain.

Puigdemont, whose regional government was dismissed by Spanish Prime Minister Mariano Rajoy on Friday, accused Madrid of “premeditated aggression” against the will of the Catalans.

Rajoy removed Puigdemont, took over the administration of the autonomous region and set a new election after Catalonia’s parliament declared itself an independent nation on Friday.

The bold if futile action brought Spain’s worst political crisis in the four decades since the return of democracy to a new and possibly dangerous level.

“It’s very clear that the best form of defending the gains made up until now is democratic opposition to Article 155,” Puigdemont said in a brief statement, referring to the constitutional trigger for the takeover.

But he was vague on precisely what steps the secessionists would take as the national authorities are already moving into Barcelona and other parts of Catalonia to enforce the takeover.

European countries, the United States and Mexico have also rejected the Catalan declaration and expressed support for Spain’s unity.

Puigdemont signed the statement as president of Catalonia, demonstrating he did not accept his ousting.

“We continue persevering in the only attitude that can make us winners. Without violence, without insults, in an inclusive way, respecting people and symbols, opinions, and also respecting the protests of the Catalans who do not agree with what has decided the parliamentary majority,” he said.

The secessionists say a referendum on Oct. 1 gave them a mandate for independence. However, less than half of eligible voters turned out for the ballot, which Madrid declared illegal and tried to stop.

Opinion polls show that more than half of the 5.3 million people eligible to vote in the wealthy northeastern region, which is already autonomous, do not want to break from Spain.

But emotions are running high and the next few days will be tricky for Madrid as it embarks on enforcing direct rule.

It is also unclear if the fresh new regional election set for Dec. 21 would resolve the crisis as it could increase the numbers of independence supporters in a new parliament.

In another development, Catalonia’s police force told its officers to remain neutral, a step towards averting possible conflict following doubts over how the Mossos d’Esquadra, as the they are called, would respond if ordered to evict Puigdemont and his government.

The force is riven by distrust between those for and against independence and is estranged from Spain’s national police forces, Mossos and national officers have told Reuters. Some Catalan officers stood between national police and those trying to vote during the referendum.

“Given that there is it is likely to be an increase in gatherings and rallies of citizens in all the territory and that there are people of different thoughts, we must remember that it is our responsibility to guarantee the security of all and help these to take place without incident,” said the memo, which had no name attached to it.

Government buildings, the headquarters of national political parties, ports, airports, courts, and the Bank of Spain were being guarded, the Interior Ministry said. Units of the regional force could be replaced if events made that necessary, it said.

Trapero became a hero to the secessionists after his force took a much softer stance than national police in enforcing the ban. Spain’s High Court banned Trapero from leaving the country and seized his passport as part of an investigation for alleged sedition, although it did not order his arrest.

Prosecutors say he failed to give orders to rescue national police trapped inside a Barcelona building during pro-independence protests last month.

In Barcelona, thousands of independence supporters packed the Sant Jaume Square in front of the regional headquarters on Friday night, waving Catalan flags and singing traditional songs in the Catalan language as bands played.

But there was no trouble overnight and the streets of Barcelona were quiet on Saturday.

Emmanuel Torcal, a 52-year-old businessman walking his dog, said he was sympathetic to independence but worried about the escalation and possible consequences.

“I sympathize but I have my life, my work, and this is affected. But I am Catalan and I say if we have to go, let’s go.”

The main secessionist group, the Catalan National Assembly, has urged civil servants not to follow orders from the Spanish government and to mount “peaceful resistance” while a pro-independence trade union, the CSC, called a strike.

The government said it would ensure a minimum service.

About 1,000 people took part in a pro-unity rally in Madrid on Saturday and others turned out in the northern city of Valladolid — an indication of the resentment the independence drive has caused in the rest of Spain.

Aitor Sanchez, a 30-year-old worker, said he was saddened the government had taken control of Catalonia but it had no choice.

“These are delicate moments in our country. But I believe we must respect the law.”

The chaos has prompted a flight of business from Catalonia, which contributes about a fifth of Spain’s economy, the fourth-largest in the euro zone. Tourism in hugely popular Barcelona has been hit, and markets have shown signs of concern.

European leaders have also denounced the push, fearing it could fan separatist sentiment around the continent.

Catalonia has a litany of historic grievances, exacerbated during the 1939-1975 Franco dictatorship, when its culture and politics were suppressed.