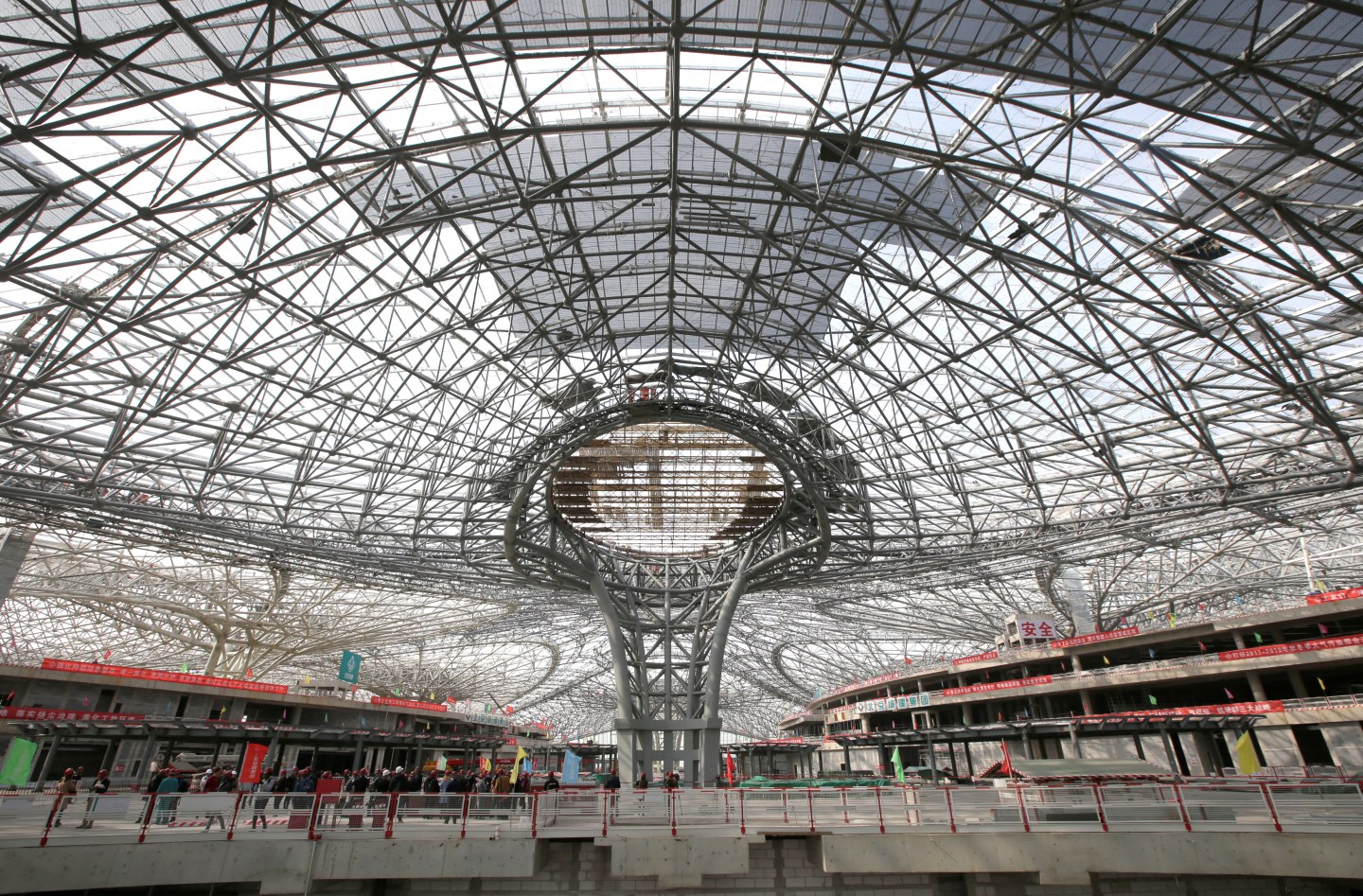 (BEIJING) — China’s capital unveiled the “shining example” of its 80 billion yuan ($12.14 billion) new airport on Monday, tipped to become one of the world’s largest when it opens in October 2019 amid a massive infrastructure drive overseen by President Xi Jinping.

Representatives showed off the sprawling skeleton of “Beijing New Airport”, which is made up of 1.6 million cubic metres of concrete, 52,000 tonnes of steel and spans a total 47 sq km (18 sq miles), including runways.

It is expected to serve an initial 45 million passengers a year with an eventual capacity of 100 million, putting it on par with Hartsfield-Jackson Atlanta International Airport.

Updates on the airport come as the ruling Communist Party is set to open its 19th congress later this week, a twice-a-decade leadership event where Xi will consolidate power and emphasise successful projects and policy from his first five years.

The project, which broke ground in 2014, is one of the region’s largest infrastructure investments under Xi’s rule, which has been plagued by fears of slowing economic growth, offset slightly by a construction spree.

China has sought to boost its profile as both an aviation hub and a manufacturer in recent years. The country’s first home-grown passenger jet, the C919, lifted off on its maiden flight in May, edging into a multibillion-dollar market currently dominated byBoeing Co (BA) and Airbus SE (AIRBUS-GROUP-N-V).

Situated 67 km south of Beijing, the airport technically falls in neighbouring Hebei province, though it will eventually constitute its own development zone.

It will relieve pressure on Beijing’s existing international airport, to the northeast of Beijing and currently the world’s second largest by passenger volume, which opened a new terminal worth $3.6 billion in 2008 ahead of the Beijing Summer Olympics.

For more on transport in China, see Fortune’s video:

The existing airport will continue to operate major international flights, though a third smaller domestic airport in the city’s south will close in coming years.

The airport will be connected to Beijing by a high speed train with a top speed of 350 km an hour, as well as an inter-city train and a major expressway.

Original plans for the airport were made by French airports operator Aeroports de Paris, though third-party improvements to the original version make the final design “wholly domestic”, said Zhu.

“It’s like a large flower, but made of steel,” said one construction worker on the site, who declined to share his name because he was not authorised to speak to press.