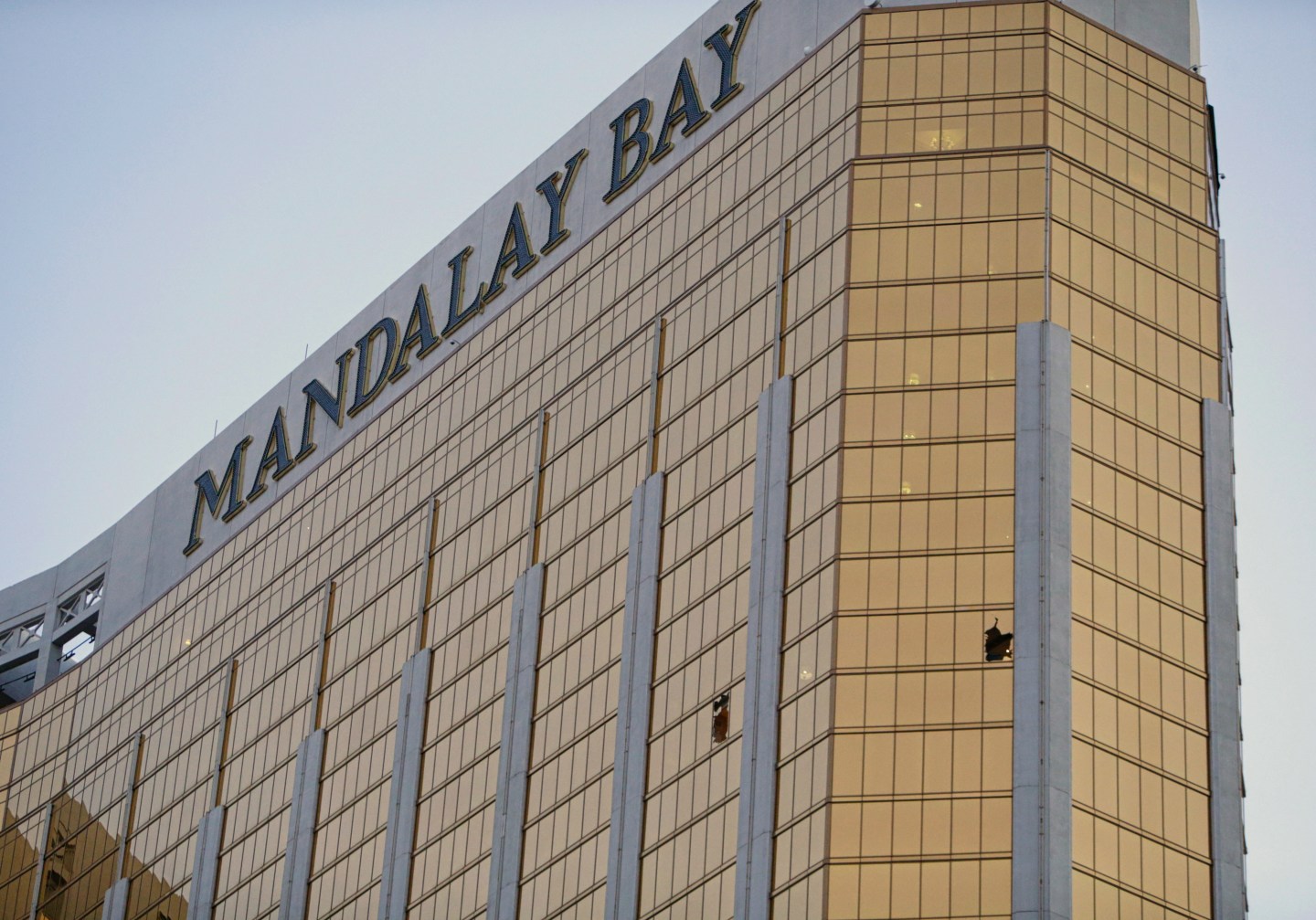 This Oct. 2, 2017 photo shows two broken windows on the 32nd floor of the Mandalay Bay Resort and Casino in Las Vegas, in the aftermath of the Oct. 1 mass shooting.
Marc Sanchez—Icon Sportswire/Getty Images

The owner of the hotel where a gunman carried out the deadliest mass shooting in modern U.S. history on Thursday provided a new version of the timeline, suggesting there was no time for hotel staff to warn police.

Stephen Paddock opened fire on Mandalay Bay hotel security guard Jesus Campos and the crowd attending an outdoor concert nearby at the same time, or within 40 seconds of each other, MGM Resorts International (MGM) said in a statement.

Police have still not determined a motive for the shooting.

MGM’s account differed from the updated timeline Las Vegas police provided on Monday, when they said Campos had been shot six minutes before Paddock opened fire on the crowd from his 32nd-floor suite and killed 58 people on Oct. 1. MGM said on Tuesday the revised police timeline might not be accurate.

A Las Vegas Metropolitan Police Department spokesman, Officer Larry Hadfield, said the police would have no immediate comment on the hotel’s latest statement. The Las Vegas office of the Federal Bureau of Investigation could not immediately be reached for comment.

Clark County Sheriff Joseph Lombardo, who oversees the Las Vegas police department, on Wednesday defended the speed of the police response in an interview with the Las Vegas CBS television affiliate.

“No matter what that timeline was, the response was as quick as possible. I don’t think the response could have been any faster,” Lombardo said in a video posted on the station’s LasVegasNow.com website.

The revised timeline police provided on Monday raised new questions, including why Paddock ceased firing on concert-goers once he began, and whether hotel security and police coordinated as well as first believed.

MGM said the 9:59 p.m. time that police said is when Campos was shot was derived from a hotel report created manually after the fact without the benefit of information the hotel now has.

“We are now confident that the time stated in this report is not accurate,” MGM said. “We know that shots were being fired at the festival lot at the same time as, or within 40 seconds after, the time Jesus Campos first reported that shots were fired over the radio.”

Las Vegas police officers were with armed hotel security officers in the building when Campos, who was checking an open-door alarm also on the 32nd floor, first reported that shots were fired over the radio, MGM said. Both groups immediately responded to the 32nd floor.

The police have said they assembled a SWAT team and burst into Paddock’s room to find him dead 81 minutes after the shooting began.

“We will continue to work with law enforcement as we have from the first moments of this tragedy as they work toward developing an accurate timeline,” MGM said.

MGM’s new timeline is a blow to lawyers representing some of the victims, whose claims depend heavily on the hotel’s allegedly delayed response following the shooting of Campos. A lawsuit filed in Nevada state court on Tuesday on behalf of a California woman injured in the shooting alleged the hotel acted negligently by responding too late.

Neama Rahmani, a Los Angeles lawyer representing some of the victims, said in an email on Thursday that MGM may have acted quickly, “but the question of whether reasonable precautions were in place remains.”