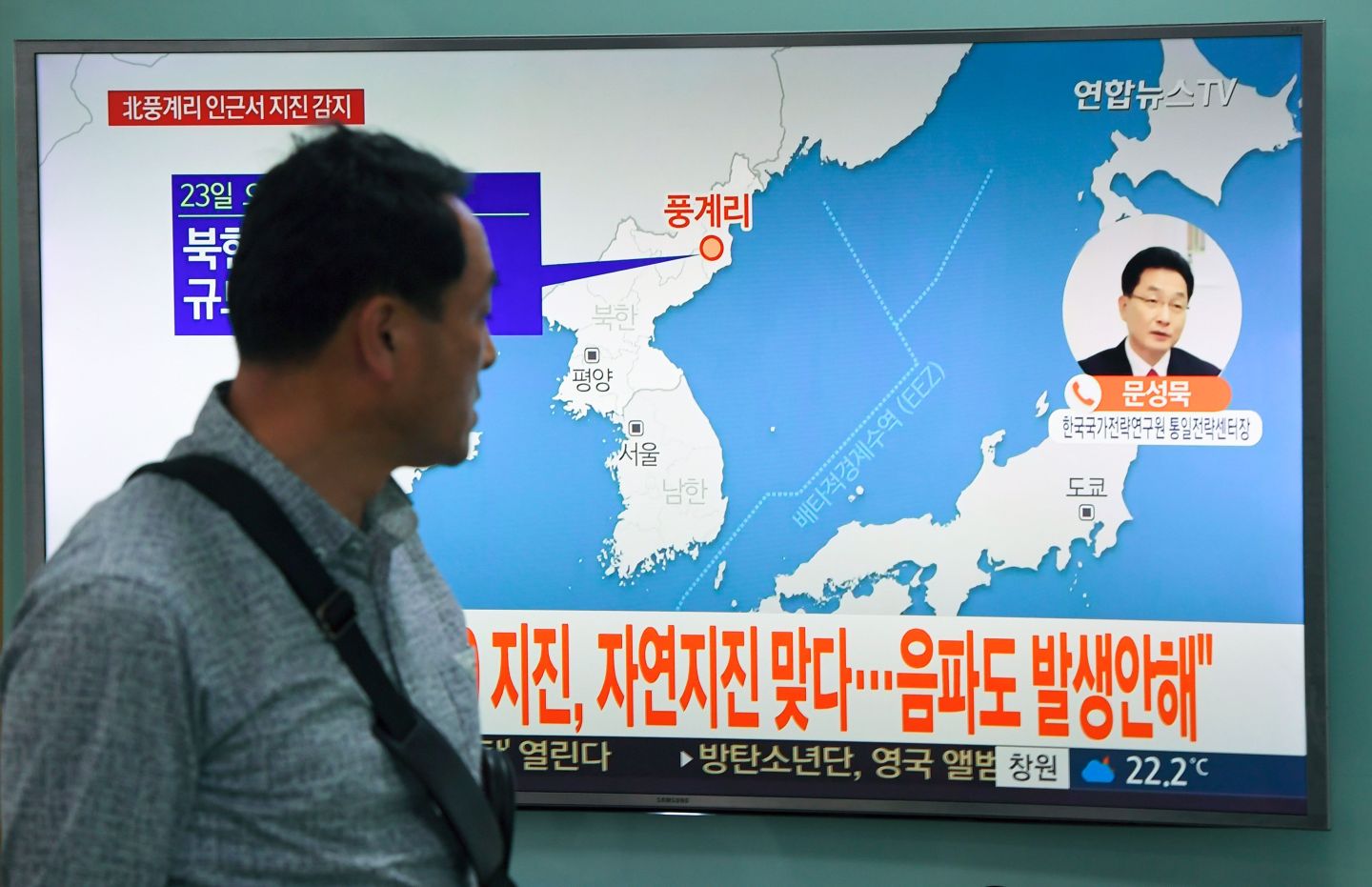 A man watches a television news screen showing a map of the epicenter of an earthquake in North Korea, at a railway station in Seoul on September 23, 2017. China's seismic service CENC on September 23 detected a zero-depth, 3.4-magnitude earthquake in North Korea, calling it a "suspected explosion". There seemed to be some initial difference of opinion, however, with Seoul's Korea Meteorological Agency (KMA) saying that it had registered a tremor of a similar size, but judged it a "natural quake". / AFP PHOTO / JUNG Yeon-Je (Photo credit should read JUNG YEON-JE/AFP/Getty Images)
JUNG YEON-JE AFP/Getty Images

A small earthquake near North Korea’s nuclear test site on Saturday was probably not manmade, the nuclear proliferation watchdog and a South Korean official said, easing fears Pyongyang had exploded another nuclear bomb just weeks after its last one.

Chinese earthquake officials said the magnitude 3.4 quake detected at 0829 GMT was a “suspected explosion” but both the CTBTO, which monitors nuclear tests, and a South Korean meteorological agency official said they believed it was a natural quake.

“A key method is to look at the seismic waves or seismic acoustic waves and the latter can be detected in the case of a manmade earthquake,” said the South Korean official, who asked for anonymity. “In this case we saw none. So as of now, we are categorising this as a natural earthquake.”

The earthquake, which South Korea put at magnitude 3.0, was detected in Kilju county in North Hamgyong Province, where North Korea’s known Punggyeri nuclear site is located, the official said.

A secondary tremor detected after that test could have been caused by the collapse of a tunnel at the mountainous site, experts said at the time. Satellite photos of the area after the Sept 3 quake showed numerous landslides apparently caused by the massive blast, which North Korea said was an advanced hydrogen bomb.

The head of the nuclear test monitoring agency CTBTO said on Saturday that analysts were “looking at unusual seismic activity of a much smaller magnitude” than the Sept 3 test in North Korea.

Russia’s emergency ministry says background radiation in nearby Vladivostok was within the natural range.

The U.S. Geological Survey said it could not conclusively confirm whether the quake, which it measured at magnitude 3.5, was manmade or natural.

“The depth is poorly constrained and has been held to 5 km by the seismologist,” USGS said. “The Air Force Technical Applications Center (AFTAC) is the sole organization in the U.S. federal government whose mission is to detect and report technical data from foreign nuclear explosions.”

There was no immediate reaction from China’s Foreign Ministry, but the news was widely reported by Chinese state media outlets and on social media.

Tensions have continued to rise around the Korean peninsula since Pyongyang carried out its sixth nuclear test, prompting a new round of U.N. sanctions.

North Korea’s Foreign Minister Ri Yong Ho, currently in New York for a United Nations meeting, warned on Thursday that Kim could consider a hydrogen bomb test of an unprecedented scale over the Pacific.

Ri is due to address the United Nations later on Saturday.

U.S. President Donald Trump called the North Korean leader a “madman” on Friday, a day after Kim dubbed him a “mentally deranged U.S. dotard” who would face the “highest level of hard-line countermeasure in history”.

North Korea’s nuclear tests to date have all been underground, and experts say an atmospheric test, which would be the first since one by China in 1980, would be proof of the success of its weapons programme.

North Korea has launched dozens of missiles this year, several of them flying over Japan, as it accelerates a weapons programme aimed at enabling it to target the United States with a nuclear-tipped missile.

While China has been angered by North Korea’s repeated nuclear and missile tests and has signed up for the increasingly tough U.N. sanctions, it has also stressed the need to resume dialogue and for all sides to take steps to reduce tensions.

In a series of meetings this week at the United Nations, Chinese Foreign Minister Wang Yi has reiterated to various foreign counterparts that apart from sanctions, the resolutions also call for dialogue to resume and that this needs to happen.

Earlier on Saturday, China said it will limit exports of refined petroleum products from Oct. 1 and ban exports of condensates and liquefied natural gas immediately to comply with the latest U.N. sanctions. It will also ban imports of textiles from North Korea.

The United States and South Korea are technically still at war with North Korea because the 1950-53 Korean conflict ended with a truce and not a peace treaty.

The North accuses the United States, which has 28,500 troops in South Korea, of planning to invade and regularly threatens to destroy it and its Asian allies.