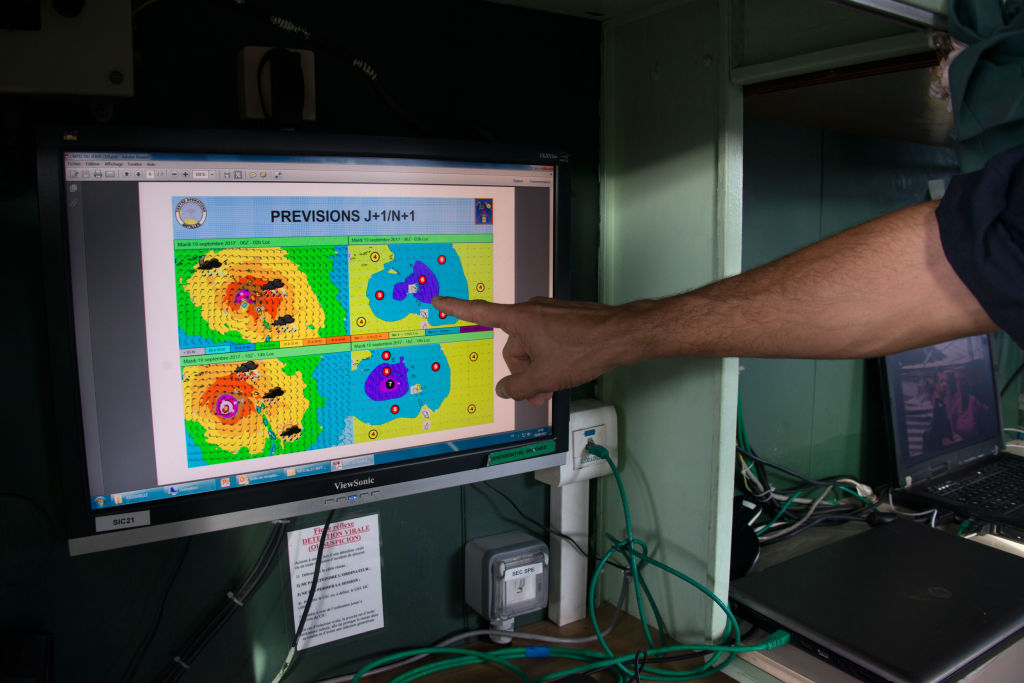 A man points at a screen monitoring the weather and the progression of Hurricane Maria onboard the French marine frigate Germinal which arrived at the port of Galisbay, on the French Caribbean island of Saint Martin, to deliver bottled water on September 18, 2017, after the passage of Hurricane Irma. Almost two weeks after Hurricane Irma slammed into St Martin, killing 15 people, the French-Dutch Caribbean island has begun to take small steps toward reconstruction. Out on the roads, soldiers and volunteers work side by side to clear debris clogging the streets, stocking branches, metal sheets and other rubble in long piles along the embankment. / AFP PHOTO / Helene Valenzuela (Photo credit should read HELENE VALENZUELA/AFP/Getty Images)
HELENE VALENZUELA / AFP/Getty Images

Hurricane Maria, the second Category 5 storm to hit the Caribbean this month, plowed into the small island nation of Dominica on Monday with roof-ripping fury on a collision course with the U.S. Virgin Islands and Puerto Rico later this week.

Hurricane Maria was upgraded Monday evening to the top of the five-step Saffir-Simpson scale when its maximum sustained winds reached 160 miles per hour (215 km per hour), with higher gusts, the U.S. National Hurricane Center (NHC) reported.

Less than 90 minutes later, the center of the storm, described by the NHC as “potentially catastrophic,” passed almost directly over Dominica, on a track that would put it over Puerto Rico by Wednesday, according to the agency’s latest bulletins.

There was no immediate word on the fate of Dominica, a former British colony home to 72,000 people that lies in the eastern Caribbean about halfway between the French islands of Guadeloupe, to the north, and Martinique, to the south.

But Prime Minister Roosevelt Skerrit, in a Facebook post around the time Maria made landfall, said the storm has blown the roof off his home, adding, “I am at the complete mercy of the hurricane. House is flooding.” He then added, “I have been rescued.”

Millions more in the Virgin Islands and Puerto Rico, still reeling from Hurricane Irma earlier this month, have another day or two to prepare for the storm, forecasters said.

If Maria retains its strength, it would be the most powerful hurricane to hit Puerto Rico in 85 years, since a Category 4 storm swept the U.S. island territory in 1932, Hurricane Center spokesman Dennis Feltgen said. The last major hurricane to strike Puerto Rico directly was Georges, which made landfall there as a Category 3 storm, he said.

The governor of Puerto Rico, Ricardo Rossello, urged island residents on Twitter to brace for the storm’s arrival, saying, “It is time to seek refuge with a family member, friend or head to a state shelter.”

Puerto Rico narrowly avoided a direct hit two weeks ago from Hurricane Irma, which reached a rare Category 5 status and ranked as the most powerful Atlantic storm on record before devastating several smaller islands, including the U.S. Virgin Islands of St. Thomas and St. John.

U.S. Virgin Islands Governor Kenneth Mapp said Maria was due to pass late Tuesday night or early Wednesday within 10 miles of the island of St. Croix, which escaped the brunt of Irma’s Category 5 clout oHurricane Maria is Now Officially a Category 5 Stormn Sept. 6. The island is home to about 55,000 year-round residents, roughly half of the entire territory’s population.

Mapp warned that hurricane-force winds were expected to howl across St. Croix for eight hours, accompanied by up to a foot and a half (46 cm) of rain that would be followed by nearly a week of additional showers.

At an evening news conference, he predicted most islanders would be without electricity for weeks, and that “some folks will not get power in months.” A curfew will be imposed starting at 10 a.m. local time on Tuesday, he said.

Mapp asked the public for prayers and urged St. Croix residents take cover in one of three emergency shelters on the island. For those choosing to stay in their homes during the storm, he said, they might consider climbing into a second-floor bathtub and pulling a mattress over them to stay safe in the event they lose their roofs.

Forecasts predict Maria will be the worst storm to hit St. Croix since Hugo, a Category 4 storm, in 1989.

The territory’s two other main islands, St. Thomas and St. John, which lie to the north of St. Croix, sustained widespread heavy damage from Irma, which killed more than 80 people in the Caribbean and the U.S. mainland.

Beth Tamplin Jones, 45, rode out Hurricane Irma earlier this month in the pantry of a friend’s house on St. John.

“I don’t think anybody’s ever been hit by a storm like that. To see another one coming is just so discouraging,” said Jones, who fled to Puerto Rico last week and then caught a flight to Atlanta, where she planned to remain until Maria passed.

Maria was expected to whip up storm surges – seawater driven ashore by wind – of up to 9 feet (2.7 m) above normal tide levels, the NHC said. Parts of Puerto Rico could see up to 25 inches (64 cm) of rain, it said.

Puerto Rico, an island of about 3.4 million inhabitants, opened shelters and began to dismantle construction cranes that could be vulnerable to Maria’s high winds as residents rushed to buy plywood, water and other supplies.

Maria marks the 13th named Atlantic storm of the year, the seventh hurricane so far this season and the fourth major hurricane – defined as Category 3 or higher – following Harvey, Irma and Jose, the NHC said. Those numbers are all above average for a typical season, which is only about half over for 2017.