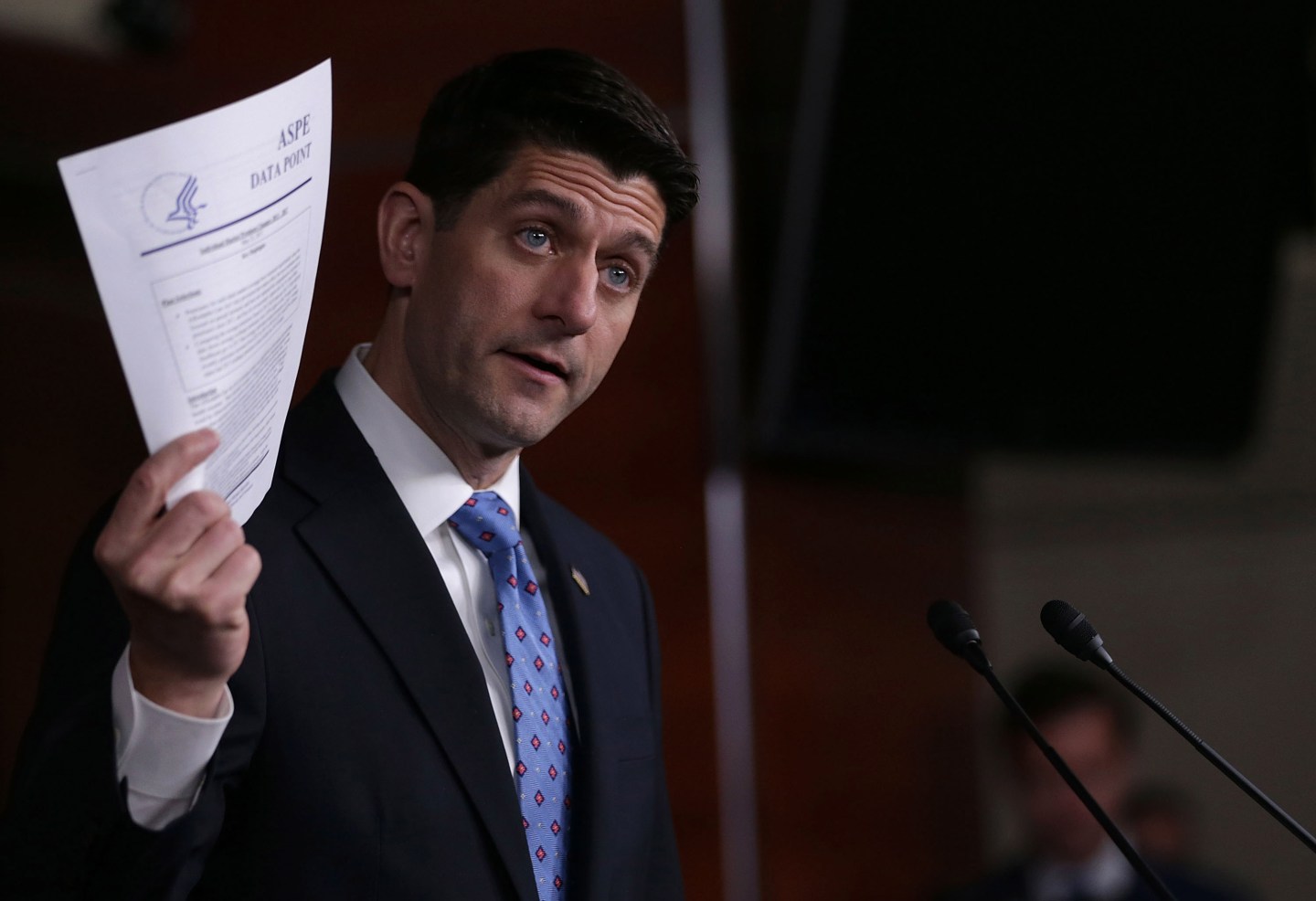 WASHINGTON, DC - MAY 25: U.S. Speaker of the House Rep. Paul Ryan (R-WI) holds up a Department of Health and Human Services report on "Individual Market Premium Changes: 2013 - 2017" during a weekly news briefing May 25, 2017 on Capitol Hill in Washington, DC. Speaker Ryan took questions from the media on the CBO score of the AHCA and the alleged assault on a reporter by Montana congressional candidate Greg Gianforte. (Photo by Alex Wong/Getty Images)
Alex Wong/Getty Images
(WASHINGTON) — Republicans spooked world markets in their ardor to cut spending when Democrat Barack Obama occupied the White House. Now, with a GOP president pressing for politically popular tax cuts and billions more for the military, few in the GOP are complaining about the nation’s soaring debt.

The tea partyers and other conservatives who seized control of the House in 2010 have morphed into Ronald Reagan-style supply siders while the GOP’s numerous Pentagon pals run roughshod over the few holdouts. Tax cuts in the works could add hundreds of billions of dollars to the debt while bipartisan pressure for more money for defense, infrastructure, and domestic agencies could add almost $100 billion in additional spending next year alone.

The bottom line is the $20 trillion national debt promises to spiral ever higher with Republicans controlling both Congress and the White House.

“Republicans gave up on caring about deficits long ago,” bemoaned Republican Sen. Rand Paul of Kentucky, who was elected in the 2010 tea party class.

It’s a far cry from the Newt Gingrich-led GOP revolution that stormed Washington two decades ago with a mandate to balance the budget and cut taxes at the same time. Or even the GOP of 2001, which enthusiastically cut taxes under former President George W. Bush, but only at a moment when the government was flush with money.

Now, deficits are back with a vengeance. Medicare and Social Security are drawing closer to insolvency, and fiscal hawks and watchdogs like the Congressional Budget Office warn that spiraling debt is eventually going to drag the economy down.

But like Obama and Bush before him, President Donald Trump isn’t talking about deficits. Neither much are voters.

Topping the immediate agenda, however, is a debt-financed drive to overhaul the tax code. Top Capitol Hill Republicans like House Speaker Paul Ryan of Wisconsin and Senate Majority Leader Mitch McConnell of Kentucky had for months promised that tax overhaul would not add to the deficit, with rate cuts financed by closing loopholes and other steps.

Instead, Republicans are talking about tax cuts whose costs to the debt — still under negotiation — would be justified by assumptions of greater economic growth.

He backed off months of promises that the Republicans’ tax plan won’t add to the nation’s ballooning deficit.

The GOP moves could justify $800 billion or so in tax cuts over 10 years, but the administration is pressing behind the scenes to push the envelope well beyond that range.

“They’re starting to talk about tax cuts instead of tax reform,” said former Sen. John Sununu, R-N.H. “When people are desperate to find legislation that they can pass they tend to take the easy path.”

Among the few deficit hawk holdouts is Sen. Bob Corker, R-Tenn., a key vote on the Senate Budget Committee, who’s been pumping the brakes on taxes, a stand that’s earned him face-to-face meetings with both Treasury Secretary Steven Mnuchin and Trump himself. Corker says he believes in some adjustments but doesn’t want to “let this just be party time that just takes us no place but massive deficits down the road.”

Meanwhile, the election of Trump has GOP military hawks pressing to shovel enormous amounts of money into the Pentagon — about $90 billion over the stringent spending limits set by the hard-won 2011 deficit control effort. Republican demands for spending cuts as the price of lifting the government’s debt limit and averting a market-rattling default on U.S. obligations pushed negotiations perilously close to a market crisis that summer.

The unpopular leftover from the 2011 agreement are those spending limits, which if violated would be enforced by across-the-board spending cuts known as sequestration. Republicans want to scrap them, at least for military money.

“There’s so much pressure on our side for additional defense spending,” said Rep. Tom Cole, R-Okla. “Believe me there’s more defense hawks than budget hawks in the Republican conference right now.”

But it takes Democratic help to lift the limits and their price, unsurprisingly, is more money for domestic programs.

That leaves GOP deficit hawks frustrated. They’ve won, for now, a $200 billion package of spending cuts as part of the House budget resolution, which has stalled after committee approval this summer. The Senate hasn’t acted yet, but no one in that chamber is taking the lead in pressing for a companion package of cuts.

And conservatives demanding that spending cuts accompany any extension of the government’s borrowing ability were undercut by Trump, who agreed last week to add temporary borrowing approval to a must-pass Harvey relief bill.

Anger over Trump’s debt bargain, though, has conservatives vowing that issues of spending and deficits won’t be kicked to the curb for long.

“It’s not going to be shoved aside much longer because this (debt limit) deal last week … has got people all riled up, and justifiably so,” said longtime GOP Rep. Joe Barton of Texas.

“We’ll be ready next time.”