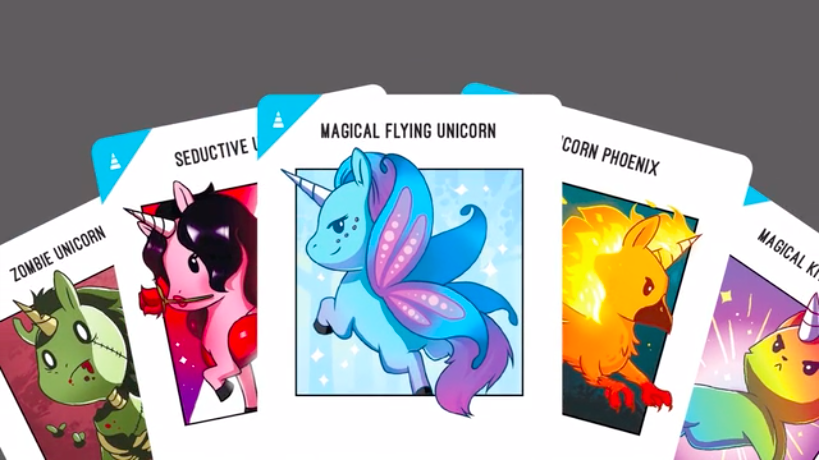 Creator Ramy Badie originally set out to earn $10,000 in one month to fund production of the game. He reached his goal in just 71 minutes and has, as of this writing, collected more than $1.8 million for the project from more than 30,000 backers—more than every other project that’s currently live on the fundraising website.

“Tabletop games are huge on Kickstarter right now,” says company spokesperson David Gallagher. “We’ve really become an important hub for tabletop fans, and many of them keep coming back to find new and cool projects to support. It’s also become much easier for independent game designers to get their games manufactured and shipped.”

Though the game seems built around Silicon Valley’s obsession with the mythical creature (and its use of the term to denote startups with billion-dollar valuations), it’s not. It’s simply a game built for people—and perhaps magazines—who love unicorns.

Players of the game are tasked with building a “unicorn army.” There are three types of unicorns in the deck—baby, basic, and magical—and the first person to have seven unicorns in their hand (a “stable”) wins. “Be warned,” the game’s Kickstarter page says. “If you get ahead too quickly, you’ll become everyone’s target.” (Just like in Silicon Valley.)

There are several obstacles in the way of a player’s victory. “Neigh” cards are used to cancel out opponents’ strategic moves. A “Pandamonium” card makes it so that “all your Unicorns are considered Pandas and NOT Unicorns.” (Oh, right.) The game’s makers say it’s suitable for two to eight players, ages 14 and older, and the latest donors can expect a February delivery date.

“If the thought of aggressive, violent and occasionally seductive unicorns appeals to you, we really appreciate your support on this project,” says Badie in the campaign video.

He later tells Fortune: “I’ve always had an odd obsession with unicorns, featuring them in a lot of our shirt designs and products. To me, unicorns have historically been mythical creatures that are associated with majesty and perfection, and I like turning that on its head.” Or horn, if I may.

The St. Louisan, who is in his late 20s, designed the game’s mythical characters, which resemble My Little Pony- hued Pokémon. According to an article about him in The St. Louis Business Journal, while working toward his undergraduate degree in neuroscience, Badie entered t-shirt design contests to subsidize his tuition. In 2012, he delayed medical school to found TeeTurtle LLC, an e-commerce venture aiming to “scratch your insatiable itch for cute, funny, pop culture-y shirts.” TeeTurtle’s first year saw $750,000 in sales, and another $7 million in sales was projected for 2014.

Now Badie has a new addictive project. “Unstable Unicorns is a strategic card game about everyone’s two favorite things: destruction and unicorns,” the project’s website says. Who wouldn’t want to scratch that itch?

“It’s been a thrilling ride,” Badie says, “and I’ve already found myself thinking about a sequel.”