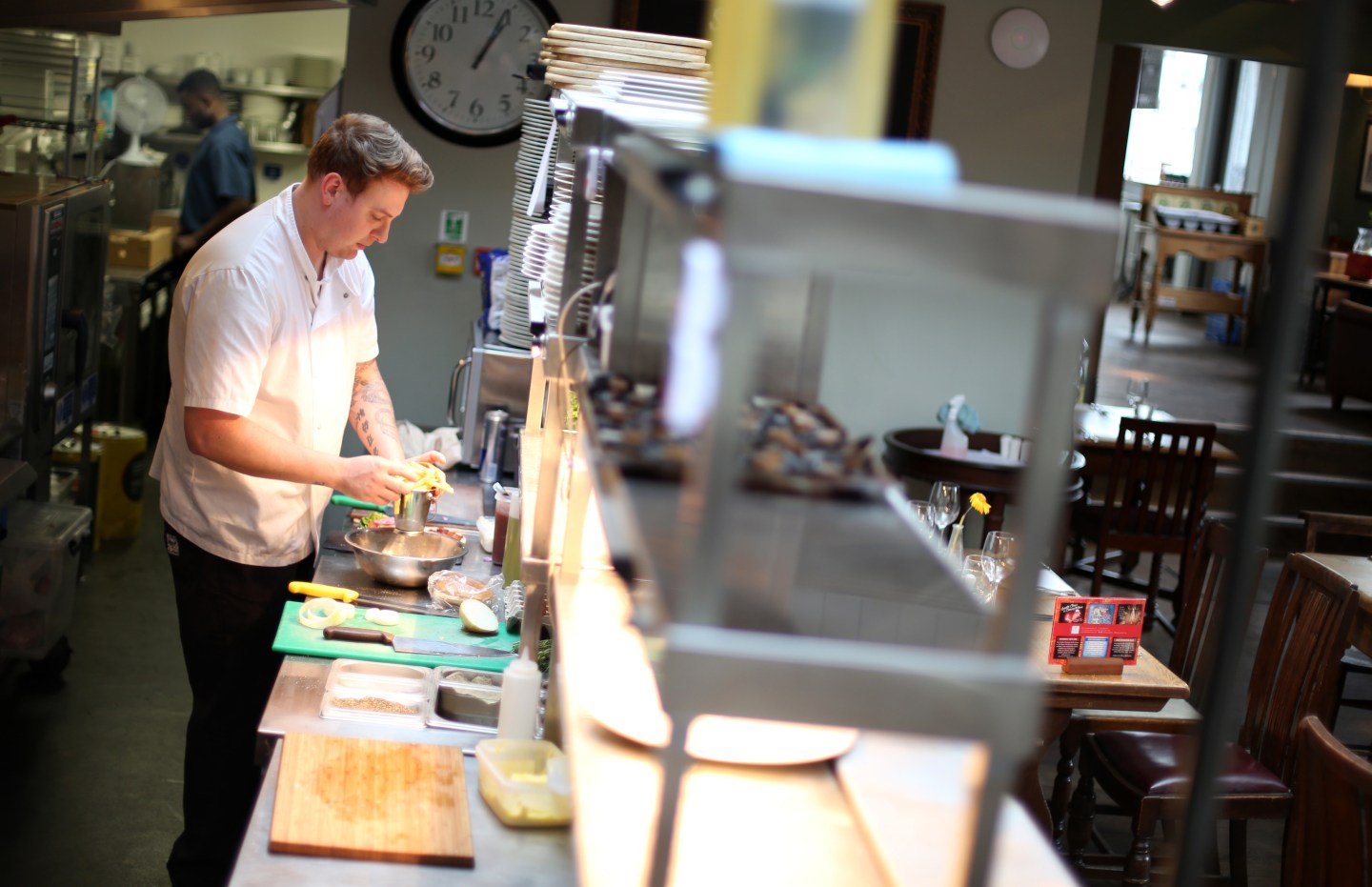 Business is booming for Paul Murphy’s recruitment agency in northwest England. Clients are rolling in with more jobs in restaurants, bars and hotels than ever before, but finding workers to fill them has become tricky.

Britain’s vote to leave the EU has complicated life for Murphy. A steady stream of continental Europeans who for years have taken up hundreds of thousands of positions in the hospitality business and other industries has started to dry up.

“It’s definitely getting worse. The lead time to fill a chef vacancy at the moment … could be anything between two and six months,” said Murphy, whose Knight Benton Recruitment agency is based in the small town of Cleator Moor.

By contrast finding a chef last year would take two months at most, he told Reuters.

Citizens of the remaining European Union states – from Italians and Spanish to Poles and Romanians – face losing their automatic right to live in Britain when it leaves the bloc in March 2019. Murphy believes the government must produce an alternative immigration regime that ensures employers get the workers they need.

“Without a proper plan in place, they could crash the economy,” he said.

The hospitality sector, like farming and construction, has relied heavily on Europeans, and particularly on people from the poorer ex-communist states which began joining the EU in 2003.

Citizens of other EU countries could make up as much as a quarter of the 3 million workers in hospitality, according to a KPMG report based on a survey of British Hospitality Association (BHA) members. That includes 75 percent of waiting staff, 37 percent of housekeepers and 25 percent of chefs.

Last June’s referendum has affected both the supply of labour and demand for it.

European workers are starting to leave Britain or having second thoughts about coming in the first place, worried about their uncertain status after Brexit.

On top of this, the pound has fallen more than 15 percent against the euro and about 21 percent against the Polish zloty since the referendum. That means Europeans’ sterling pay does not stretch nearly so far when they send money home, encouraging them to seek work elsewhere.

But Murphy’s clients need more staff. Cleator Moor lies on the edge of the Lake District national park, a top tourist draw. The weak pound has encouraged many Britons to holiday at home and attracted growing numbers of foreign visitors to places like the Lake District. They need feeding and accommodating.

Smaller firms are particularly affected. Some are paying agencies to recruit for roles they used to fill easily themselves, raising salaries and offering more part-time hours.

At a national level, big brands like the Pret a Manger sandwich chain and pizza restaurant group Franco Manca have warned about the impact on their businesses.

Hospitality alone accounts for around 4.3 percent of the British economy, the BHA estimates, but the problem is wider. Numerous recruitment and sentiment surveys have suggested that firms across the economy are struggling to fill vacancies.

Prime Minister Theresa May’s government has to balance these concerns with those of the many Britons who say they voted for Brexit primarily to clamp down on migration from the EU.

The government wants to keep the right of Irish citizens to work in Britain, an arrangement which long pre-dates the EU. But a leaked document last week showed it is considering restricting migration from other EU states to all but the highest skilled workers. The government has said only that it would set out its proposals later this year.

Employers fear too hard a line will make matters worse. Already they raised salaries at the fastest pace for two years in August as the fall in EU migration aggravates the labour shortage, according to a survey by the Recruitment and Employment Confederation.

Hospitality needs to recruit 200,000 people every year to make up for natural staff turnover and power its growth, according to the BHA. Without any new EU migration or an increase in applications from Britons, it estimates the industry could face a shortfall of more than 60,000 jobs every year.

Since 2003 the number of people born in other EU states living in Britain has jumped from 1.26 million to 3.68 million in 2017, according to Oxford University’s Migration Observatory. Eastern Europeans accounted for almost all the increase.

But that trend has slowed sharply. In the 12 months to March, net migration from all countries was 246,000, down 81,000 from the previous year, official data show.

More than half that drop was due to EU citizens leaving and fewer arriving since the Brexit vote. The biggest fall was among citizens of eight eastern European countries.

Up-market fast food chain Leon, which runs 52 restaurants mostly in London and southeast England, is feeling the consequences. “What we’ve seen this year, particularly in the last quarter, is a significant drop in applications from EU nationals,” said Marco Reick, the firm’s people director.

With staff from other EU states making up around 60 percent of Leon’s 1,000-strong workforce, the firm has responded by splitting full-time roles into part-time positions. While more expensive initially, this makes them more attractive to British candidates who tend to want more casual work.

Indian fine-dining restaurant group MW Eat says job applications from EU nationals are down around 80 percent since the referendum. “We’ve had to increase wages by in excess of 10 percent,” said chairman Ranjit Mathrani. Even then, the group is taking on less qualified candidates, raising training costs. As a result, it is having to increase menu prices.

On top of that unemployment is its lowest in decades, at 1.46 million people or 4.3 percent of the workforce in the three months to July.

Peter Gowers, chief executive of the Travelodge budget hotel group, says there simply aren’t enough available Britons. “Even if the hotel industry recruited virtually every person on the unemployment register there wouldn’t be enough people to fill all the roles needed in the 10 years following Brexit,” he told the Mail on Sunday newspaper.

Gowers called on the government to consider a guest worker programme to avoid price rises and investment cuts.

Other large firms say they have avoided the impact so far. One such is the Gordon Ramsay Group, which operates restaurants under the name of one of Britain’s most outspoken celebrity chefs. CEO Stuart Gillies said that with two thirds of its workforce from other EU states, the firm has brought forward steps to retain staff including offering more flexible shifts.

The government’s ambition is to cut annual net migration to “the tens of thousands”. For some employers, the prospect of further falls in migration is unsettling.

“That really makes me very uncomfortable, because we’re struggling as it is,” said Reick.