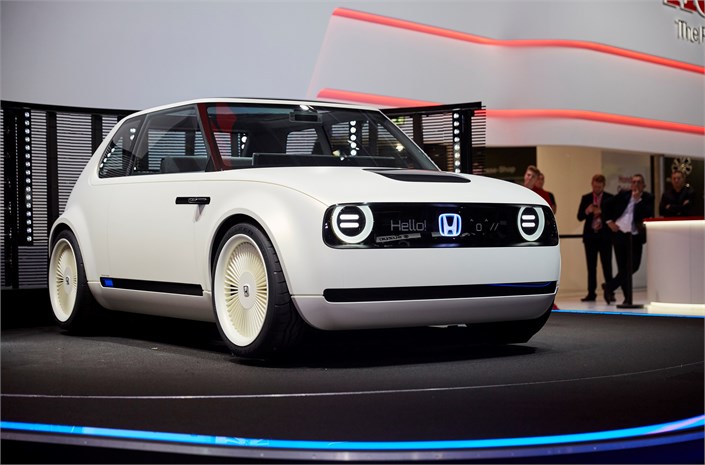 Honda’s vision for the future, which it showed off at the 2017 Frankfurt Motor Show on Tuesday, is electric with a hint of the 1970s first generation Civic.

The Urban EV is a concept. But unlike many, many other concepts that get rolled onto auto show stages, a version of this car is going into production. And it’s coming to Europe by 2019.

The all-electric concept car is built on a new platform that aims to set a direction for what Honda’s future battery electric car will look like. Honda first revealed its electric car strategy earlier this year at the 2017 Geneva Motor Show and it’s been teasing its electric car debut plans for the Frankfurt show over the past several weeks.

“This is not some vision of the distant future; a production version of this car will be here in Europe in 2019,”Honda Motor Co. President and CEO Takahiro Hachigo said during his press conference speech.

The Urban EV, with its Honda emblem backlit in blue, has a low stance that’s supposed to hint at its sporty driving performance. The car is about 100 mm shorter than the Jazz supermini, the EU version of the Honda Fit.

The front of the car has a display in between the headlights that can send out multi-lingual messages, including greetings—Hello!—advice for other drivers—brilliant idea—or charging status updates.

The inside of the concept car features two bench-style seats that can accommodate four people. The design, while unlikely to show up in a production version, is meant to create a “lounge feeling.”

Honda used the Urban EV to show off its an automated “assistant” that learns from the driver by detecting emotions behind their judgments, the company said. The assistant can take what it has learned from the driver’s past decisions and make new recommendations.