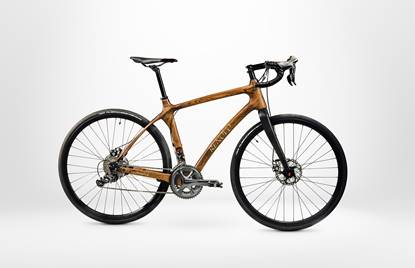 Glenmorangie is known for its high-end whisky, but now the distillery might be known for something else as well: high-end bicycles. The Scotch-maker has teamed up with bicycle maker Renovo to make the world’s first bicycles out of whisky casks.

Priced at $6,950 each, the bikes are the distillery’s second partnership in its Beyond the Cask series. The first was a pair of sunglasses that were made last year with British eyewear designer Finlay & Co.

To make the bikes, Glenmorangie shipped cask staves (the individual pieces of wood used to form a barrel) to Renovo’s workshop in Portland, Orgeon. There, the staves were kiln-dried and their charred surfaces (the inside of whisky barrels are charred to add flavor to the liquid while it ages) were smoothed away before they were transformed into hollow frames. The distillery says each bike frame took at least 20 hours to make.

“We are so excited to be working with Glenmorangie, a distillery with which we feel such affinity,” says Renovo’s founder Ken Wheeler said in a statement. “Renovo is dedicated to honoring wood in the creation of our bicycles, because of the materials superior engineering properties, ensuring a smoother ride. These beautiful machines, uniquely fashioned from Glenmorangie’s staves, will inspire anyone with a taste for innovation to enjoy fine quality bicycles.”

Each finished bike weighs 18 pounds and is decorated with Glenmorangie’s Signet icon. Each one is also individually numbered and has a protective coating so you can ride it around in the elements without fear that it will become damaged in the process.

The bikes will be available for sale online later this month, you can preorder one now on Renovo’s website with a $1000 deposit.