Donald Trump to North Korea: ‘All Options Are on the Table’ After Latest Missile Test 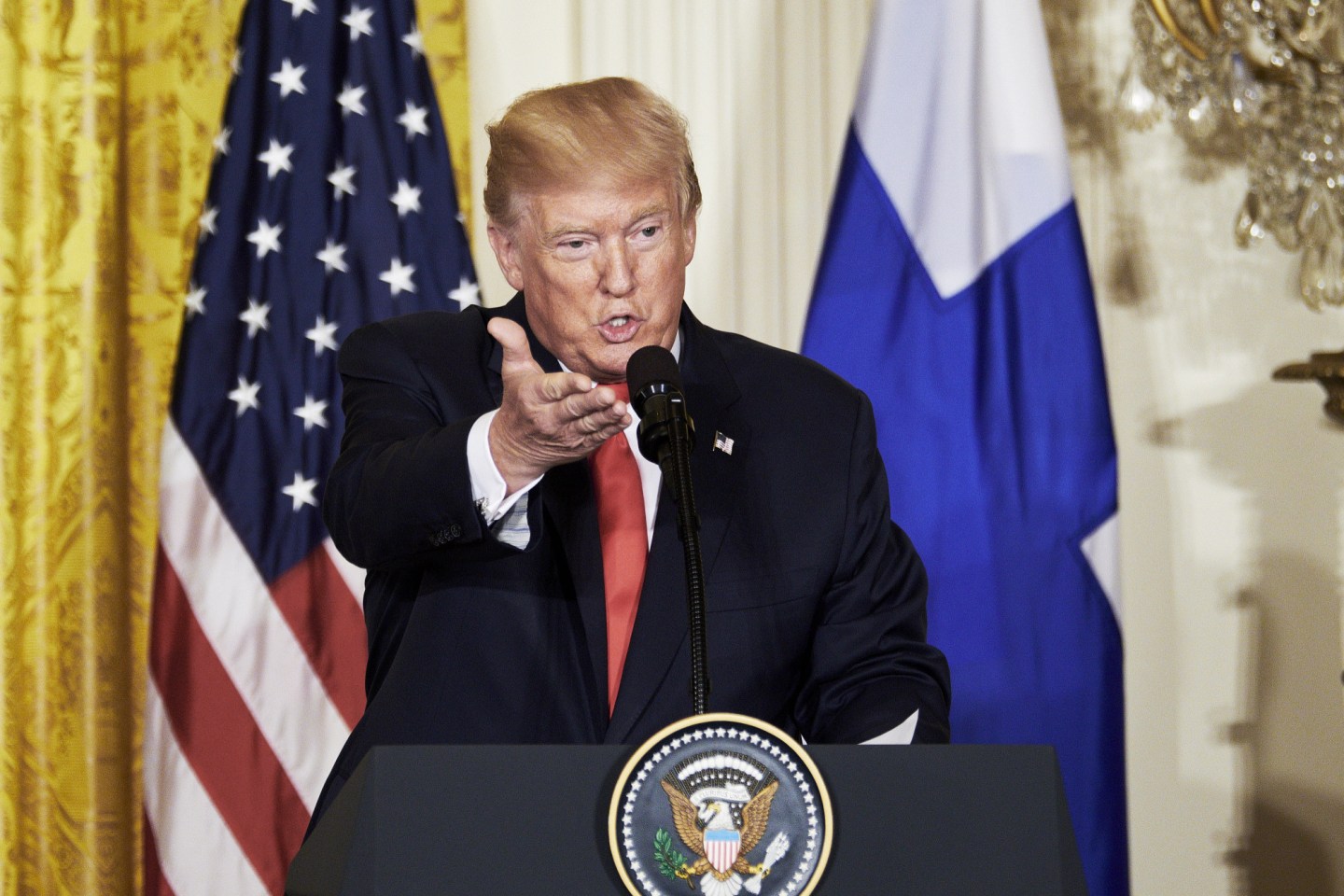 U.S. President Donald Trump said that “all options” are under consideration in response to North Korea firing an unidentified ballistic missile over Japan on Tuesday as Kim Jong Un’s latest provocation rattled markets.

“The world has received North Korea’s latest message loud and clear: this regime has signaled its contempt for its neighbors, for all members of the United Nations, and for minimum standards of acceptable international behavior,” Trump said in a statement issued by the White House.

“Threatening and destabilizing actions only increase the North Korean regime’s isolation in the region and among all nations of the world. All options are on the table.”

Stocks slumped across Europe and Asia and havens including gold jumped after the missile launch, rattling markets from London to Sydney. U.S. stock futuresalso tumbled. Treasuries jumped and the dollar weakened. Gold surged to the highest this year, while the Swiss franc and the yen were the best-performing major currencies.

“A missile passing over Japan is an unprecedented, grave and serious threat,” Prime Minister Shinzo Abe told reporters in Tokyo. Abe said he spoke with Trump for 40 minutes, and they agreed to increase pressure on North Korea. He also called for China and Russia to take action.

The White House said in a statement that Trump and Abe agreed that North Korea poses “a grave and growing direct threat” to the U.S., Japan, South Korea, and countries around the world. The two agreed to try to increase international pressure on Pyongyang.

It was the first North Korean projectile to fly over Japanese airspace since the regime launched a rocket over Okinawa in 2016, and undermines nascent hopes for dialogue with North Korea. That’s after tensions had appeared to cool following a war of words between Trump and Kim earlier this month.

With sanctions having little impact and any war likely to be catastrophic, the U.S. and its allies have few good options to stop Kim from obtaining the capability to hit North America with a nuclear weapon. Russian Deputy Foreign Minister Sergei Ryabkov said “it’s already obvious to everyone that the resource of sanctions pressure is exhausted.”

“North Korea is acting as if it’s a nuclear weapons state,” John Park, director of the Korea Working Group at Harvard Kennedy School, told Bloomberg Television. “You can draw any number of red lines; in North Korea’s mind they’re on the cusp of getting itself the capabilities that are in the realm of the great powers.”

The state-run Korean Central News Agency mocked and goaded Trump in a commentary that didn’t reference the missile. It called the U.S. president “the source of headache at home and abroad” and said his policies were “either ignored or delayed” and he was snubbed by other Western leaders.

China urged countries involved to refrain from provoking each other, Foreign Affairs spokeswoman Hua Chunying said on Tuesday at a regular briefing in Beijing. “The facts have proven that pressure and sanctions cannot fundamentally solve the issue,” she said. “The only way out is through dialogue and consultation.”

South Korean stocks led regional losses, with the Kospi index sliding as much as 1.6 percent before closing 0.2 percent lower. Safe haven assets from gold to Treasuries and the yen advanced.

Trump spoke with Abe and last week said Kim was “starting to respect us,” a shift in tone after he vowed earlier in the month that threats from North Korea would be met with “fire and fury.” He has previously said military force is an option to prevent Kim from gaining a nuclear-tipped intercontinental ballistic missile.

Trump’s public statements have riled critics at home who question the lack of diplomatic and government experience in the administration.

“This is about as complicated a dance as you get, trying to show toughness” and “put together a serious diplomatic effort that could unwind this crisis without military hostilities,” U.S. Senator Chris Murphy, a Connecticut Democrat, told MSNBC Tuesday.

He added: “The Trump administration is really excited about the first part — the tough talk — but they don’t have anybody in place at the State Department or at the White House who can chart that second path.”

North Korea has said it won’t place its nuclear program on the negotiating table unless the U.S. drops its “hostile” policies. It has strongly protested annual military exercises now underway between the U.S. and South Korea, saying they are aimed at regime change and could spark an accidental war.

Following the launch on Tuesday, Japan asked the United Nations Security Council to hold an emergency meeting and said now wasn’t the time for dialogue.

“This will make it more difficult for the U.S. to get Japanese support for diplomacy, unfortunately, at exactly the time when the situation is heating up,” said David Wright, a co-director of the Union of Concerned Scientists. He called the launch a “big deal,” saying North Korea previously tested missiles at a high trajectory to avoid flying over Japan.

The missile was launched from near Pyongyang, traveled 2,700 kilometers in an easterly direction and reached an altitude of 550 kilometers, South Korea’s military said.

It was likely an intermediate-range ballistic missile, according to Japanese Defense Minister Itsunori Onodera. Japan didn’t shoot it down after an assessment that it wasn’t aimed at its territory.

Pyongyang had threatened earlier this month to fire a missile over Japan toward the U.S. territory of Guam, which prompted threats of retaliation from American military officials.

Japanese Foreign Minister Taro Kono told reporters that the launch of a missile to the east, rather than south towards Guam, showed Pyongyang “flinched” in the face of U.S. warnings.

North Korea has shown recent advancements in its technology by testing ICBMs at high altitudes, reflecting progress toward being able to reach the continental U.S. with a nuclear warhead. That has happened despite further international sanctions aimed at squeezing Kim’s economy.

“They flew the missile over Japan because they felt the need to test a missile over a longer range,” said Ralph Cossa, president of the Pacific Forum CSIS in Honolulu. “By firing it into the North Pacific, it makes it harder to recover the pieces and warheads than if they flew it toward Guam.”

Japan and South Korea have both stepped up their efforts on missile defense. After the latest launch by North Korea, Seoul released footage of tests last week of its own ballistic missiles, according to Yonhap News. China has voiced opposition to its neighbors beefing up missile defenses, saying they could also be used to counter its own capabilities.

While China backed UN sanctions earlier this month that crimped a third of North Korea’s exports, it has resisted cutting off food and fuel supplies that are vital to the survival of Kim’s regime. China is wary of doing anything that would lead to North Korea’s collapse, a scenario that could potentially destabilize its economy and put U.S. troops directly on its border.

Trump may see more success at getting North Korea to halt testing by sending an envoy directly to Pyongyang, said John Delury, an associate professor of Chinese studies at Yonsei University in Seoul.

“The road to Pyongyang does not go via Beijing,” he said. “It goes straight from Washington to Pyongyang.”