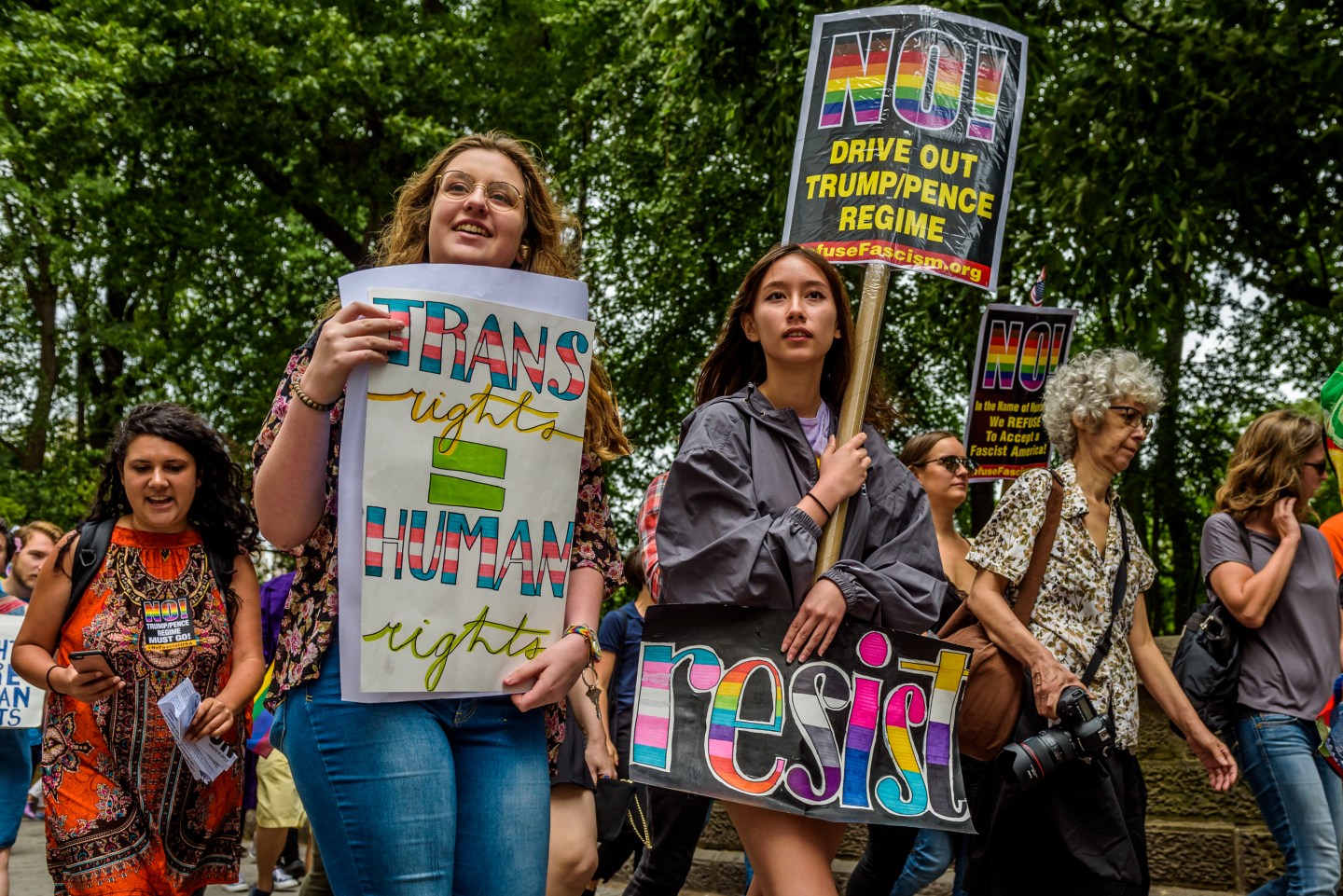 COLUMBUS CIRCLE, NEW YORK, UNITED STATES - 2017/07/29: A group of New Yorkers gathered at Columbus Circle across the Trump International Hotel and Tower New York in Central Park to raise their voices in protest against discrimination towards the LGBT community, in the aftermath of the Trump/Pence regime decision to ban transgender people from serving in the U.S. military. (Photo by Erik McGregor/Pacific Press/LightRocket via Getty Images)
Pacific Press LightRocket via Getty Images

Trump also ordered the military to stop paying for gender-reassignment surgical procedures on March 23 except to protect the health of someone who has already begun the process of reassigning sex, according to a senior White House official who briefed reporters on condition of anonymity.

Trump announced July 26 he would ban transgender people from serving “in any capacity” in the U.S. military, reversing President Barack Obama’s policy to let them serve openly and drawing immediate criticism from gay-rights groups, many Democratic lawmakers and even some conservative Republicans..

That announcement, in a series of early morning tweets, caught Pentagon officials and key members of Congress off-guard, and the Pentagon said it wouldn’t change its policies until it received a formal order from the president.

“There will be no modifications to the current policy until the President’s direction has been received by the Secretary of Defense and the Secretary has issued implementation guidance,” the office of Joint Chiefs Chairman Joseph Dunford said in a statement after Trump’s July tweets. “In the meantime, we will continue to treat all of our personnel with respect.”

Pentagon spokeswoman Dana White said the Defense Department “has received formal guidance” from the White House and “more information will be forthcoming.”

The White House waited until 6 p.m. on an August Friday, when the media audience is usually low, to announce the formal notification had come in the presidential memorandum. Trump, who often turns the signing of presidential directives into media events, in this case issued the memorandum out of sight.

Rather than say anything about the formal order in the immediate aftermath, he tweeted about the hurricane dominating media coverage on Friday.

“Storm turned Hurricane is getting much bigger and more powerful than projected. Federal Government is on site and ready to respond. Be safe!” Trump said.

Democratic Senator Tammy Duckworth of Illinois, a wounded Iraq War veteran, blasted the ban in a statement issued ahead of the White House announcement.

“When I was bleeding to death in my Black Hawk helicopter after I was shot down, I didn’t care if the American troops risking their lives to help save me were gay, straight, transgender, black, white or brown,” Duckworth said. “If you are willing to risk your life for our country and you can do the job, you should be able to serve — no matter your gender identity or sexual orientation. Anything else is not just discriminatory, it is disruptive to our military and it is counterproductive to our national security.”

Care related to gender reassignment costs the Pentagon $2.4 million to $8.4 million annually, the larger number a little more than 0.1 percent of the military’s entire health-care bill, according to a 2016 Rand Corporation study. By contrast, the military spent $84 million on Viagra and other drugs for erectile dysfunction for active-duty troops, eligible family members and retirees in 2014 alone, the Military Times reported.

Treatment of transgender people has become a flashpoint in the U.S. culture wars as social conservatives lead fights in some states to require that students, and sometimes adults, use school and public restrooms corresponding to their gender at birth.

Trump has attempted as a candidate to thread a needle between the two sides. In his campaign, he cultivated evangelical voters while at the same time promising to “fight for” the gay and transgender community.