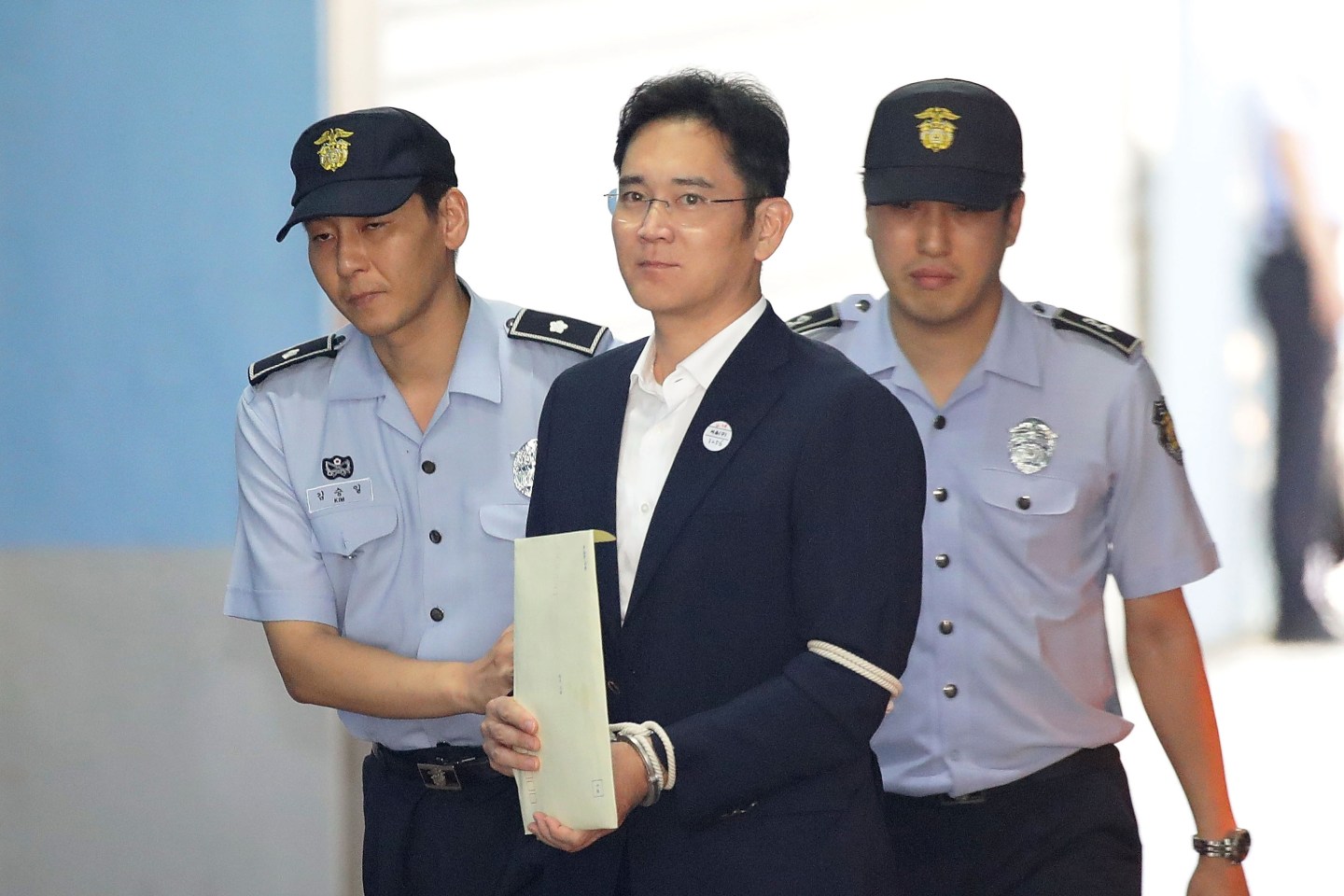 Jay Y. Lee, co-vice chairman of Samsung Electronics Co., center, is escorted by prison officers as he arrives at the Seoul Central District Court in Seoul, South Korea, on Friday, Aug. 25, 2017. Lee will learn his fate Friday in a trial that has gripped the nation for six months as part of a wider scandal involving former South Korean President Park Geun-hye. Photographer: Chung Sung-Jun/Pool via Bloomberg
Chung Sung-Jun/Pool via Bloomberg

The billionaire head of South Korea’s Samsung Group, Jay Y. Lee, was jailed for five years for bribery on Friday after a six-month trial over a scandal that brought down the president.

Lee had paid bribes in anticipation of favors from then president Park Geun-hye, according to a landmark ruling by a Seoul court, which also found him guilty of hiding assets abroad, embezzlement and perjury.

Lee, the 49-year-old heir to one of the world’s biggest corporate empires, has been held since February on charges that he bribed Park to help secure control of a conglomerate that owns Samsung Electronics, the world’s leading smartphone and chip maker, and has interests ranging from drugs and home appliances to insurance and hotels.

Lee denied wrongdoing. One of his lawyers, Song Wu-cheol, said Lee would appeal the lower court ruling. “The entire verdict is unacceptable,” Song said, adding that he was confident his client’s innocence would be affirmed by a higher court. Under South Korean law, sentences of more than three years can not be suspended. The five year-sentence is one of the longest prison terms given to a South Korean business leader.

The Seoul Central District Court said Samsung’s financial support of entities backed by Park’s close friend, Choi Soon-sil, constituted bribery, including 7.2 billion won ($6.4 million) in sponsoring the equestrian career of Choi’s daughter. In return for the contributions, prosecutors say, Samsung sought government support for a controversial 2015 merger of two of its affiliates, which helped Lee tighten his control of the conglomerate.

His lawyers had argued that the merger was done on business merits but the court did not accept that.

Park, who was forced from office in disgrace, is facing her own corruption trial, with a ruling expected later this year. Prosecutors have argued that Park and Lee two took part in the same act of bribery so Lee’s conviction would appear ominous for Park.

Son said prosecutors had built their cases on circumstantial evidence and unsubstantiated claims reported in the media. “Arresting these two innocent people are violations of human rights,” he said.

Samsung, founded in 1938 by Lee’s grandfather, is a household name in South Korea and a symbol of the country’s dramatic rise from poverty following the 1950-53 Korean War. But over the years, it has also come to epitomize the cozy ties between politicians and powerful family-controlled business groups—or chaebols—which have been implicated in a series of corruption scandals. South Koreans, who once applauded the chaebols for catapulting the country into a global economic power, now criticize them for holding back the economy and squeezing smaller businesses.

South Korea’s new president, Moon Jae-in, who replaced the Park after a May 9 election, has pledged to rein in the chaebols, empower minority shareholders and end the practice of pardoning corporate tycoons convicted of white-collar crime.