Thousands of Mexicans March to Scrap NAFTA, as Their Government Fights to Save It 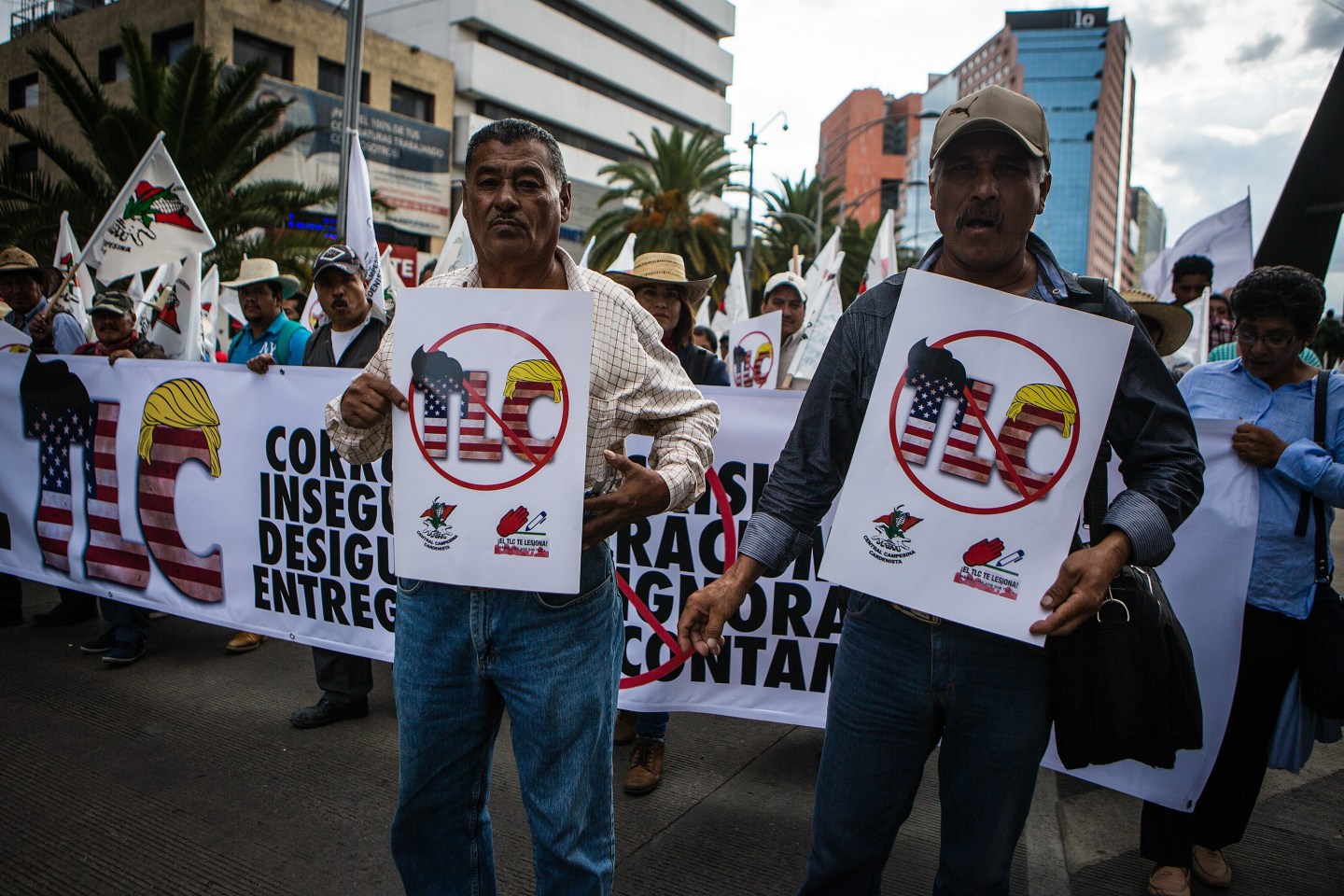 MEXICO CITY, MEXICO - AUGUST 16: People hold banners during a protest against the North American Free Trade Agreement (NAFTA) negotiations at Reforma Avenue in Mexico City, Mexico on August 16, 2017. Today, the first round of negotiations started in Washington. Trump administration repeatedly said that they might cancel the agreement in case it is not favorable to the United States, while Canada and Mexico have potential to renegotiate. (Photo by Manuel Velasquez/Anadolu Agency/Getty Images)
Manuel Velasquez/Anadolu Agency/Getty ImagesAnadolu Agency Getty Images

MEXICO CITY — While Mexican government negotiators fought tooth and nail to save the North American Free Trade Agreement during talks in Washington, thousands of Mexican farmers and workers took to the streets on Wednesday demanding the deal be scrapped.

Carrying banners that read “No to the FTA,” and decorated with images of the distinctive hairstyles of U.S. President Donald Trump and Mexican counterpart Enrique Pena Nieto, the protesters said the 1994 deal had devastated Mexican farms.

“We are against the treaty and the renegotiation because it has not benefited the country,” said university union spokesman Carlos Galindo, reflecting views widely held in the early years of the trade pact.

In a sign of that mistrust, on Jan. 1 1994 the Zapatista guerrilla army launched an armed uprising opposing free trade to mark the first day of NAFTA.

The fervor has faded and most Mexicans, including leading leftist Andres Manuel Lopez Obrador who will run for president next year, now broadly support a deal which has led to job growth, especially in the auto manufacturing sector.

A recent poll found most Mexicans wanted to save NAFTA.

Mexico’s government is keen to maintain preferential access to the United States and Canada, where nearly 85 percent of its exports are shipped.

However, much like in America’s rust belt, Mexico’s small, mainly indigenous farmers have not forgotten painful competition they blame on the free trade deal.

“The great loser in these last 23 years has been Mexico, above all, the small farmers,” said Ernesto Ladron de Guevara, speaking for one peasant farmers union at a park across from Mexico’s Foreign Ministry.

His union is pushing for NAFTA’s fate to face a public vote, possibly to coincide with next year’s July presidential election and, if the deal survives, wants it to exclude anything related to agriculture and food production.

Mexico now imports some $18.5 billion of agriculture products every year, making it one of the most important markets for U.S. farmers.

That makes U.S. rural states key supporters of the pact, making it harder for Trump to follow his declared instinct to rip it up in favor U.S. blue-collar workers who feel jobs have flooded south.

While some Mexican agriculture such as large-scale livestock farms and horticulture has flourished under NAFTA, others, especially small scale grains producers, have found it hard to compete with U.S. imports.

“The effects of the treaty have been negative for the country’s indigenous people,” said Jose Narro Cespedes, a small farmers’ representative.

Other protesters emphasized that Mexico needs to pay attention to itself, rather than outside trade partners.

“We need to focus on the internal economy,” said Galindo. “We’re a sweat-shop country, and the whole world knows it. The only thing we’re doing is exporting.”