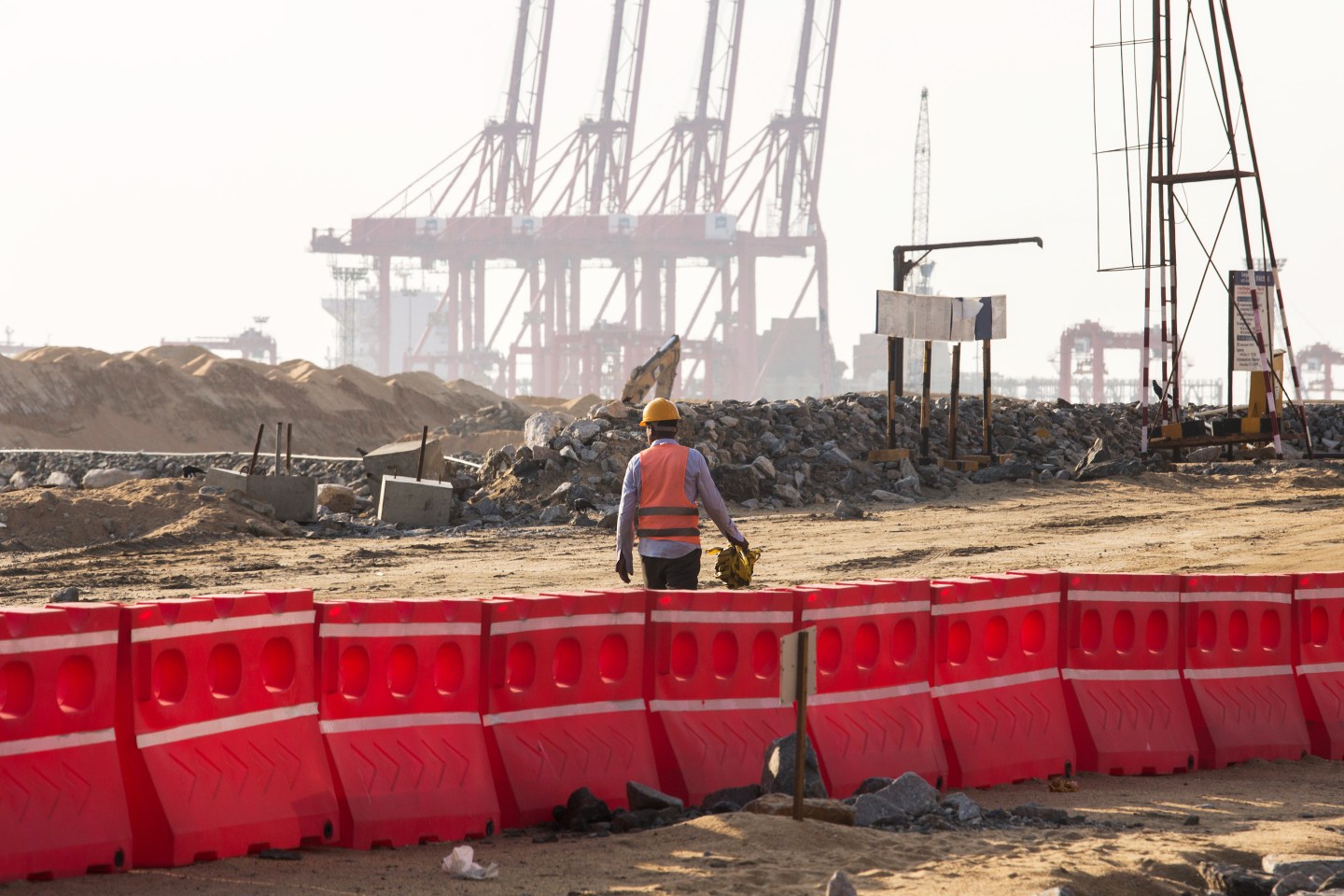 A worker walks through the construction site for the Colombo Port City development in Colombo, Sri Lanka, on Friday, April 21, 2017. Once fought over by European powers, Sri Lanka is now benefiting from the attention of Asia's biggest economies, drawn to its Indian Ocean location along some of the world's busiest sea-lanes. The Chinese-financed $1.4 billion Colombo Port City project is its largest foreign-funded investment on record and Hong Kong-based Shangri-La Asia Ltd. is building an upmarket $400 million beachfront resort on Colombo's main Galle Face beach front. Photographer: Taylor Weidman/Bloomberg via Getty Images
Taylor Weidman/Bloomberg via Getty Images

(HONG KONG) — Mergers and acquisitions by Chinese companies in countries that are part of the Belt and Road initiative are soaring, even as Beijing cracks down on China’s acquisitive conglomerates to restrict capital outflows.

Chinese acquisitions in the 68 countries officially linked to President Xi Jinping’s signature foreign policy totalled $33 billion as of Monday, surpassing the $31 billion tally for all of 2016, according to Thomson Reuters data.

Unveiled in 2013, the Belt and Road project is aimed at building a modern-day “Silk Road”, connecting China by land and sea to Southeast Asia, Pakistan and Central Asia, and beyond to the Middle East, Europe and Africa.

At a summit in May, Xi pledged $124 billion for the plan, but it has faced suspicion in Western capitals that it is intended more to assert Chinese influence than Beijing’s professed desire to spread prosperity.

The surge in Chinese companies’ acquisition-linked investments in the Belt and Road corridor comes as the volume of all outbound mergers and acquisitions from China has dropped 42 percent year-on-year as of Monday, the Thomson Reuters data showed.

Beijing’s move to prop up the yuan by restricting the flow of capital outside the country and clamp down on debt-fuelled acquisitions to ensure financial stability has made it tougher for buyers to win approvals for deals abroad.

Regulators have tightened the screws further since June, reviewing deal agreements in minute detail and ordering a group of lenders to assess their exposure to offshore acquisitions by several big companies that have been on overseas buying sprees, including HNA Group, Dalian Wanda Group and Fosun Group.

The heightened regulatory scrutiny of overseas acquisitions comes after companies spent a record $220 billion in 2016 on assets overseas, buying up everything from movie studios to European football clubs.

The scrutiny, however, has not impacted Chinese companies’ pursuit of targets along the Belt and Road corridor, as those investments are considered strategic for the companies as well as the Chinese economy.

“People are thinking in a long-term approach when making investments along Belt and Road countries,” said Hilary Lau, a corporate and commercial lawyer and partner at the law firm Herbert Smith Freehills.

“The acquisitions are also policy-driven. There are funds allocated by Chinese banks and state funds for Belt and Road deals,” he said.

The number of Chinese deals targeting Belt and Road countries totalled 109 this year, compared to 175 in the whole of last year and 134 in 2015, the Thomson Reuters data showed.

Companies enjoy a relatively smooth approval process for deals along the Belt and Road project as regulators tend to put them in a different basket when reviewing outbound investments, according to lawyers and dealmakers.

“If you are doing One Belt, One Road, that becomes the first sentence in the document” to the regulators, said a senior investment advisor at a Chinese company that has acquired several overseas businesses.

“It is a wise thing to point out early on,” said the advisor, who requested anonymity because he was not authorised to speak to the media.

The largest deal in a Belt and Road country so far this year was a Chinese consortium’s $11.6 billion buyout of the Singapore-based Global Logistics Properties.

Other top deals include the $1.8 billion purchase of an 8 percent ownership interest in an Abu Dhabi oil company by the state-owned oil giant China National Petroleum Corp, and HNA Group’s $1 billion acquisition of a logistics company, CWT Ltd, which has not yet closed.

The State Administration of Foreign Exchange, China’s foreign exchange regulator, said this month that domestic companies would still be encouraged to participate in Belt and Road activities.

HNA, which has seen at least two overseas deals hit a hurdle as a result of the crackdown on transferring money, has said it plans to prioritize investments that are in industries and regions mapped out under the Belt and Road initiative.

The belt and road acquisitions are predominantly in energy and infrastructure sectors, said Hilary Lau of Herbert Smith Freehills.

“We’ve seen a lot of activities recently in Indonesia, Malaysia and Myanmar. The whole Sri Lanka, India and Bangladesh corridor is also hot as it’s connecting the East and West,” he said.