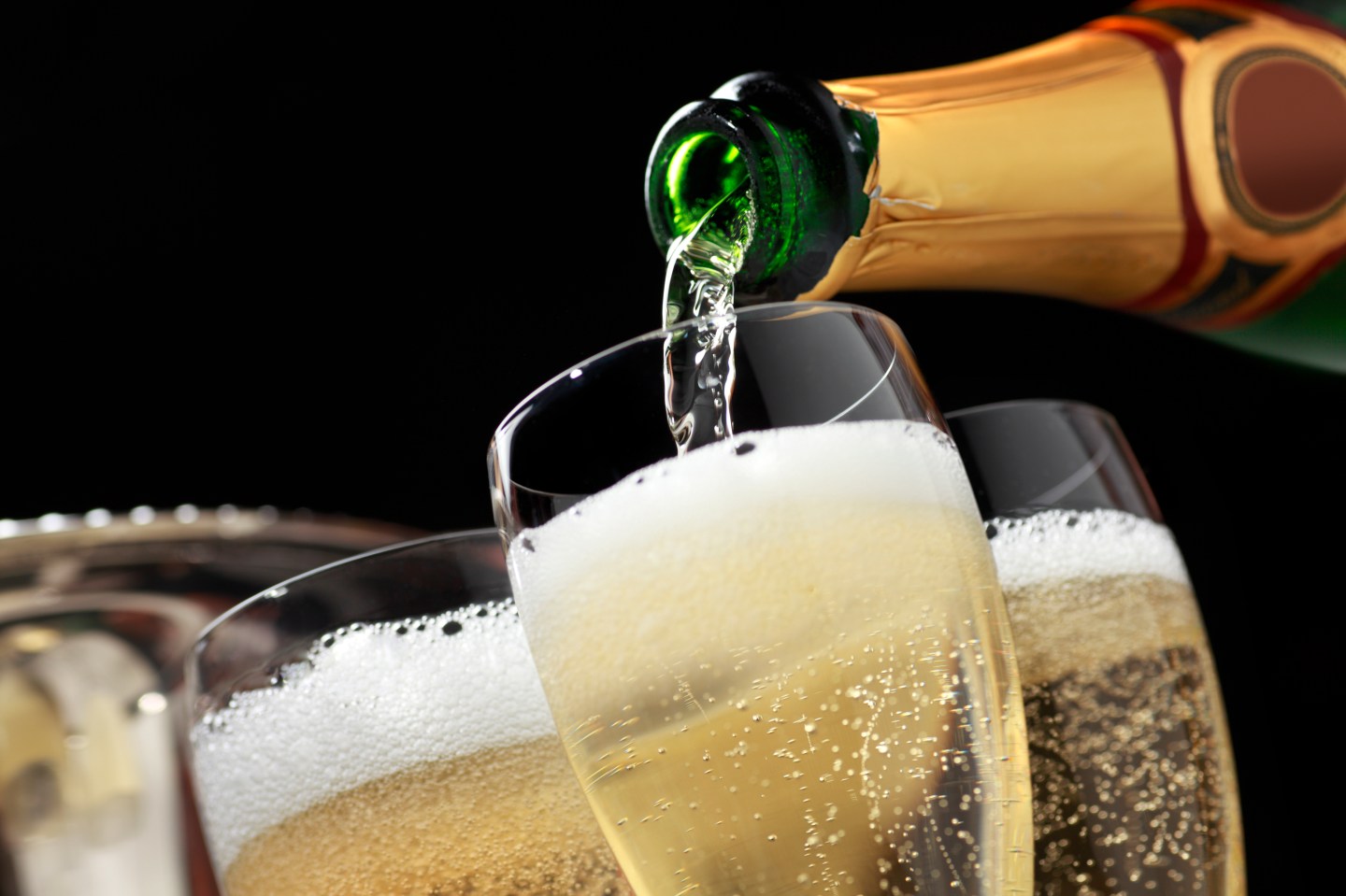 Maybe it started when Bill Murray persuaded wine snobs it was OK to drink champagne over ice.

Over the past few years, sparkling wine has been on a tear worldwide—it’s one of the three fastest-growing wine categories, according to a VinExpo/IWSR study released this past June and in 2016. And champagne shipments to the U.S. increased for the fourth year in a row, to 21 million bottles. The study also projects that global consumption of sparkling wine will increase another 8.7 percent by 2019, significantly more than overall wine consumption, at 1.4 percent.

And with all this enthusiasm for the fizzy stuff comes a new trend: hip bubbly bars.

At Air’s Champagne Parlor, a playful Art Deco “salon and living room” devoted to sparkling wine that opened just over a month ago in New York’s West Village, on offer is a drink called the WWBMD. That’s short for “What Would Bill Murray Do?” and it’s a champagne drink poured over ice with “expressed lemon” for $15.

The bar mixes hard-to-find grower champagnes from tiny producers with high and lowbrow food and nostalgic blues and Motown.

“I wanted to turn the paradigm of the champagne bar on its head and introduce people to up-and-coming bubbles in fun, unexpected ways,” explained 29-year-old owner Ariel Arce.

Air’s list of more than 100 bottles reflects the zeitgeist, with grower champagne favorites and pét-nats, as well as top proseccos, and even an unusual sparkling wine from Greece made from the xinomavro grape. Value, not a word that most people associate with great champagne, is essential, she says. For a long time, bubbly was sold as a branded luxury product. Now drinkers have discovered it’s also a wine category where they can find good deals and interesting flavors.

Like other new-style fizz bars, Air’s is pushing the idea that champagne can be an un-stuffy drink that goes with more than expensive caviar. Yes, Arce offers three kinds, but served with chive potato chips.

Arce’s inspiration for the laidback, well, air of Air’s was London’s popular, unconventional Bubbledogs, opened five years ago, which pairs 60-odd top champagnes with elaborately-topped hot dogs. It even purveys their daring pairings at events in a mustard-yellow Peugeot food truck. (Look for it at Jamie Oliver’s Big Feastival later in August.)

Among the chic new champagne bars in the U.S. playing the highbrow/lowbrow food game is San Francisco’s The Riddler, which opened in January and features tater tot waffles and complimentary popcorn with various flavored salts, which help point up any champagne’s crisp acidity. A photo of Jacqueline Bisset, clutching a bottle in the 1967 Bond film Casino Royale, hangs on one wall of the small, bright space, setting its tongue-in-cheek tone.

The Champagne region itself is home to a unique, rustic but stylish treehouse spot. To get to the Perching Bar (+33 6 07 67 94 92) in the forest of Verzy, south of Reims, you navigate raised walkways and rope bridges and sip in swing seats.

That doesn’t mean classic, plush upscale champagne bars have disappeared. The one at Michelin-starred Texture in London, which opened 10 years ago, is still thriving, while high-end, branded pop-ups of grandes marques names have been invading hotels with ever increasing frequency. On winter weekends, Aspen’s Little Nell hauls a 2,000 pound Veuve Clicquot bar on skis up the mountain slopes for those in search of off-piste adventure. (The precise location is revealed that weekend on social media.)

This summer, until the end of August, the Paris Shangri-La hotel is hosting Le Bar à Ciel Ouvert by Krug, where you can sip and watch the sunset on a terrace with a view of the Eiffel Tower. In the garden of the Grand-Hotel du Cap-Ferrat, a dedicated Dom Perignon pop-up by the fountain will pour glasses of vintages 2000 and 2006 DP through Sept. 16.

But back to Air’s. Arce has added flavor IDs to make it easy for people to identify which by-the-glass selections are right for them. “Smoked strawberries” for Paul Clouet Rosé is brilliant; “jasmine” for the De Sousa not so much.

It’s all part of the bar’s quirky charm, to advance a new idea about how to fall in love with champagne all over again.

A Taste of Bubble Bars

Air’s Champagne Parlor, New York: During the 5-to-7 p.m. Parlor Hour each night, Arce pours three champagnes on a theme for $30. “Drops of God” night on Sunday includes rare bottles like Selosse Initial.

Ambonnay, Portland, Ore.: Tucked away in a former warehouse, this bar is fizz only, with more than 50 on the list to drink with truffled popcorn or Spanish corn nuts.

Balthazar, Copenhagen: Opened in 2014, Denmark’s first champagne bar, at the Hotel d’Angleterre, is sleek and elegantly modern, with a mix of older vintages, top-grower champagnes, and popcorn with sesame seeds and curry.

Corkbuzz, New Yor: kThe two NYC spots aren’t strictly champagne bars, but from 10 p.m. to close, every one of the two dozen bottles is 50 percent off.

Le Bar à Ciel Ouvert by Krug, Paris: At the 4th floor bar at the Shangri-La hotel, the terrace is the place to be, and the wine to order is the great 2002 Krug (Grande Cuvée and Rosé are also available).

Texture, London: Super elegant, with comfy couches and lots of light, this is the place for a sophisticated tête-à-tête and a bottle of equally super-elegant 1999 Salon ($500).

The Riddler, San Francisco: The best option is to buy a bottle to share at this irreverent spot, and the tater tot waffles are a must.