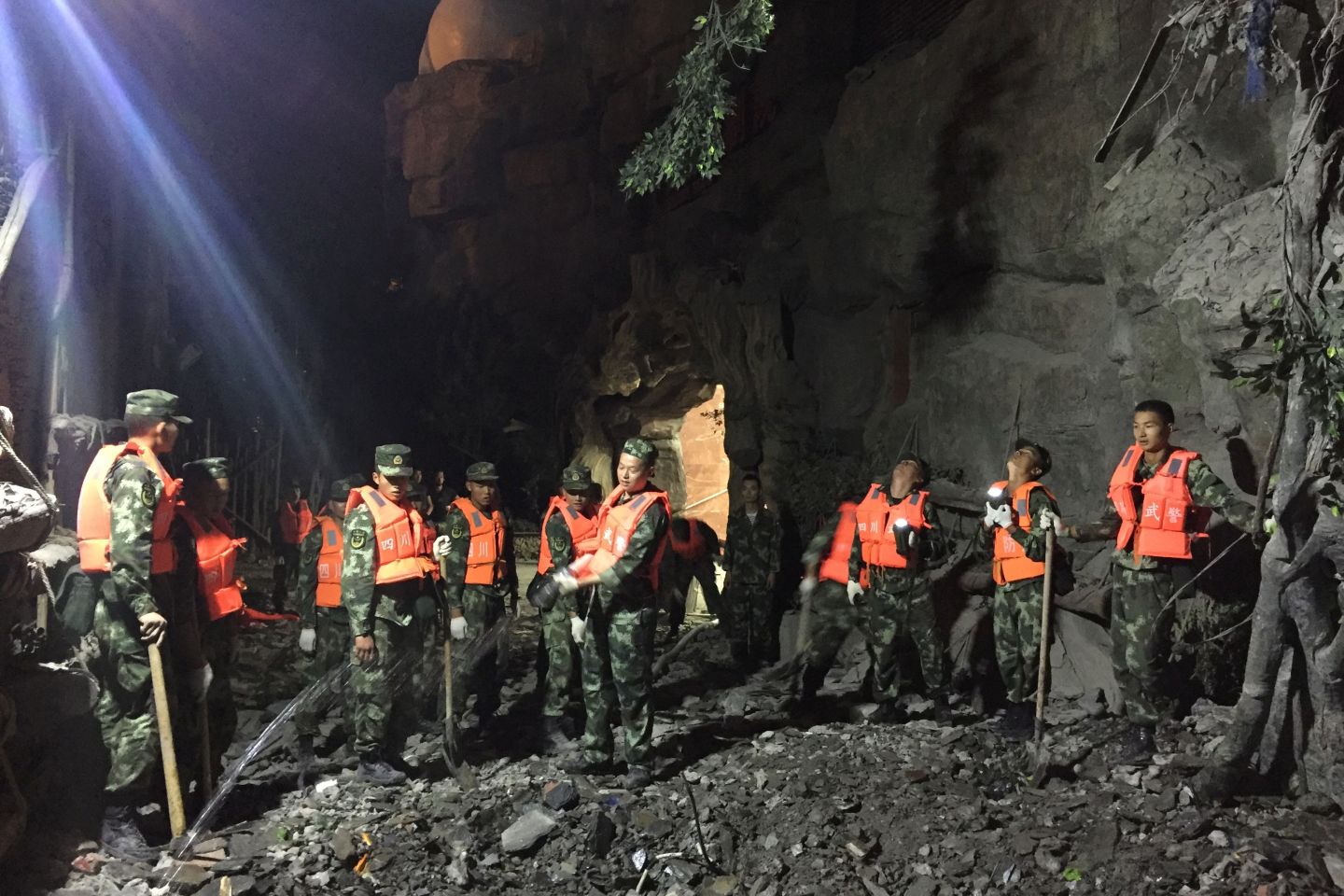 Chinese paramilitary police search for survivors after an earthquake in Jiuzhaigou in southwest China's Sichuan province early on August 9, 2017. A 6.5-magnitude earthquake rattled southwest China late on August 8, killing at least seven people, with up to 100 feared dead, according to a government estimate. / AFP PHOTO / STR / China OUT (Photo credit should read STR/AFP/Getty Images)
STR/AFP/Getty Images

Thirteen people, including six tourists, were killed and 175 injured when a 7.0 magnitude earthquake struck a remote, mountainous part Sichuan in China’s southwest, the provincial government and official media said on Wednesday.

The quake hit a sparsely populated area 200 km (120 miles) northwest of the city of Guangyuan late on Tuesday at a depth of 10 km (6 miles), the U.S. Geological Survey said. It was also close to the Jiuzhaigou nature reserve, a tourist destination.

A separate quake with a magnitude of 6.6 struck a remote part of China’s far northwestern region of Xinjiang, more than 2,000 km (1,240 miles) away, on Wednesday morning, the Chinese earthquake administration said. There were no immediate reports of casualties there.

The Sichuan government said 100 tourists had been trapped by a landslide following Tuesday’s quake. Six tourists were among those killed, according to the official China News Service.

The state-run Xinhua news agency said a total of 13 people had been killed, citing the provincial government, and that as many as 31,500 tourists had been evacuated from the quake zone.

A reception area in a hotel had collapsed, trapping some people, but 2,800 people had been evacuated from the building safely, the Sichuan fire service said.

There was no confirmation of the nationalities of any of the tourists, but Jiuzhaigou is far more popular with Chinese tourists than foreigners.

The Sichuan earthquake administration, which also measured the quake at a magnitude of 7.0, said the epicenter of the tremor was in Ngawa prefecture, which is largely populated by ethnic Tibetans, many of whom are nomadic herders.

The area was rattled by a number of aftershocks on Wednesday.

Pictures on state-run social media sites showed some damage in Jiuzhaigou, with tiles having fallen from buildings and people gathering outdoors.

State television said electricity had now largely been restored to the affected areas and the military was also sending rescuers to help with relief efforts. Jiuzhaigou airport was operating as normal after the runway was checked for damage, the report said.

The Sichuan government said on one of its official social media sites that more than 38,000 tourists were currently visiting Jiuzhaigou.

Shaking was felt in the provincial capital, Chengdu, and as far away as Xian, home of the famous terracotta warrior figures, according to users of Chinese social media.

Sichuan is frequently struck by earthquakes. A quake there in May 2008 killed almost 70,000 people.

The Xinjiang quake’s epicenter was in Jinghe county, about 100 km (60 miles) from the border with Kazakhstan, where about 140,000 people live, according to Xinhua.

Residents several hundred kilometres away in Urumqi, and the cities of Karamay and Yining, felt strong tremors, Xinhua said. The jolt lasted about 20 seconds, it said.