Martin Shkreli: Why the ‘Most-Hated’ CEO Is Strutting to Jail 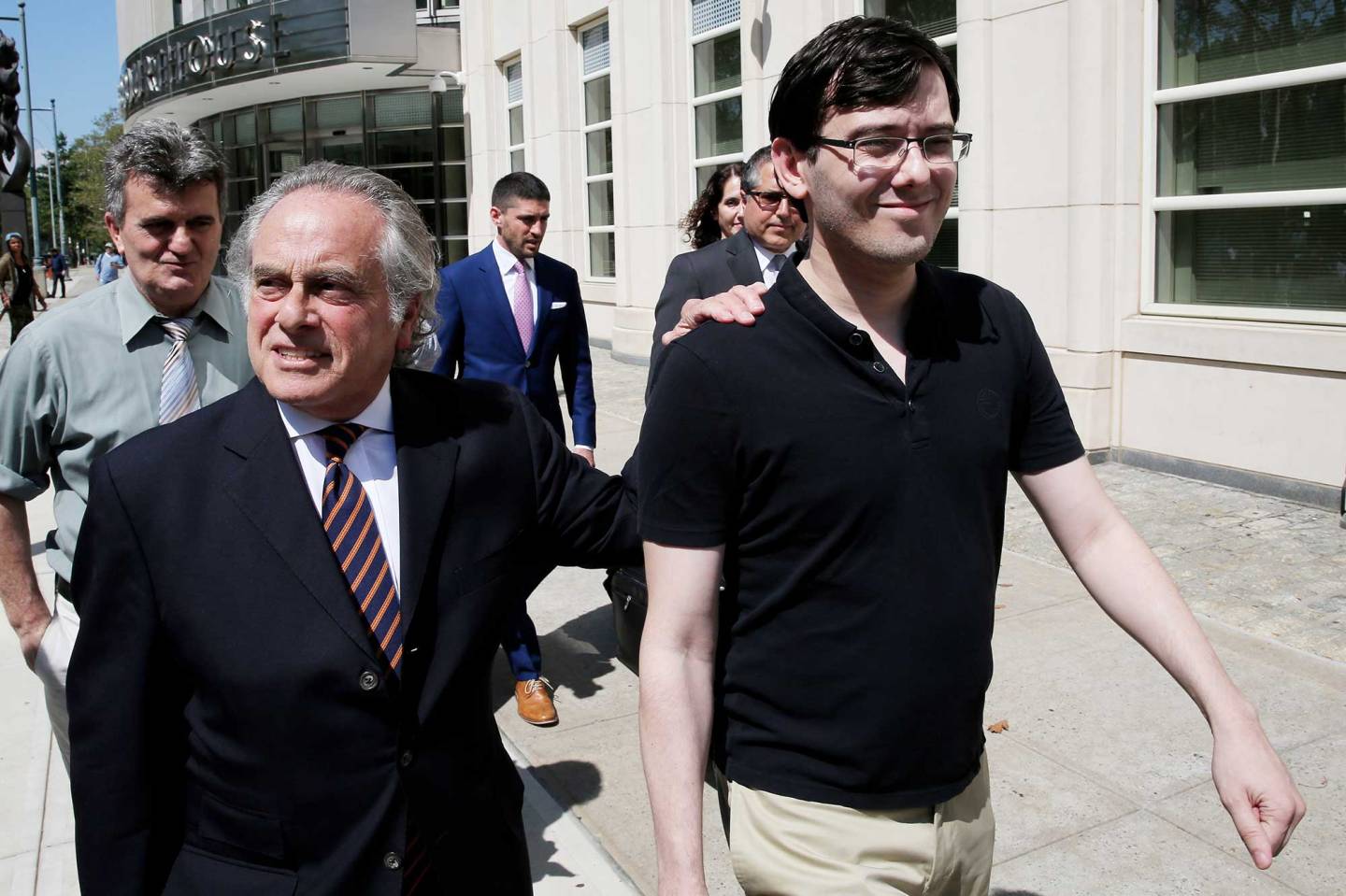 Long before jurors reached their verdict, Martin Shkreli was guilty on at least one count: gall in the first degree.

During the last week of his securities-fraud trial, federal prosecutors nailed the former biotech chief executive for one of his many lies. Shkreli liked to brag he was a Columbia University alum. On the stand, an administrator said he most certainly wasn’t.

Most would shrink into their seats. Not Shkreli. Later that day, he took to his popular Facebook Live Stream and hurled obscenities at critics.

As he sat holding his cat Trashy on his lap, the man accused of lying to his investors offered, of all things, investment advice. But what might have infuriated the government most of all wasn’t anything he said. It was what he was wearing: A Columbia T-shirt.

And worse was yet to come, as the trial reached its conclusion. Shkreli — described by the BBC as “the most hated man in America” — was convicted Friday of three counts of securities and wire fraud. He was acquitted of five other charges.

The trial ran more than a month and resembled a circus. It often seemed the boyish 34-year-old was being tried mostly for his behavior as the so-called “Pharma Bro.” He is best known as the founder of Turing Pharmaceuticals AG, where he gleefully spiked the price of a life-saving drug.

It was easy to forget his actual crime: Lying to his hedge-fund clients about their steep losses. He was accused of repaying them by stealing $11 million from Retrophin Inc., another medical company he founded — a charge the jury didn’t buy. Prosecutors described it as a Ponzi scheme or robbing one bank to repay another.

“This was a witch hunt of epic proportions,” a smiling Shkreli, flanked by his lawyers, told reporters outside court after the verdict was read. “Maybe they found one or two broomsticks but at the end of the day we’ve been acquitted of the most important charges in this case.”

As his defense lawyers repeatedly pointed out, no one seemed to be harmed, at least not at the end. Though hedge-fund investors had to wait months or years for their funds, they ultimately made money — in some cases, quite a lot. So did Retrophin shareholders. His attorneys sought to portray Shkreli as unorthodox but brilliant.

“He’s not the proper CEO. Yes, he’s a little bit nuts,” one of his attorneys, Benjamin Brafman, said in closing arguments. He alienated people close to him, but he was “so overwhelmingly impressive, you need him. You think he’s a little crazy. But you need him.”

Facing a prison term of up to 20 years, Shkreli stands out in the annals of the few American CEOs turned convicts. His fellow crooks prospered for years because of their corporate smoothness, even blandness, and were held to account only after their schemes collapsed, leaving investors, employees, and — in some cases, the economy — devastated. Think Ponzi schemer Bernie Madoff and Enron Corp.’s Jeffrey Skilling.

Arguably, Shkreli went down largely because so many found him so obnoxious for so long. Shkreli’s defense — and the man himself — said he wouldn’t have been targeted except for his notoriety, and legal experts tend to agree.

Robert C. Hockett, a Cornell University law professor, said the U.S. Justice Department is still smarting from criticism that it didn’t hold top executives accountable after the widespread fraud leading to the 2007 financial crisis. With limited resources, prosecutors also often factor in “extreme moral turpitude” as a “tie-breaker” in cases where it’s not clear whether to move forward, he said.

“Zealously pursuing a notorious and widely loathed character like Shkreli offers a great deal of bang for the buck where demonstrating prosecutorial seriousness is concerned,” Hockett said.

Six months into Donald Trump’s presidency, Shkreli captured the zeitgeist of America. Like a millennial version of Trump, he was bombastic, defiant, politically incorrect, indifferent to social norms — and, according to prosecutors, the truth — while his expert use of social media attracted a legion of followers. Unlike Trump, he was banned from Twitter after harassing a female journalist.

And on the eve of the jury getting the case to start deliberations, Shkreli went on another tirade, targeting Lauren Duca, the Teen Vogue columnist whose complaint got him banned from Twitter.

“Trial’s over tomorrow, bitches. Then if I’m acquitted, I get to f–k Lauren Duca,” he said.

Shkreli came to symbolize runaway greed and excess in the early 21st century much as financier Ivan Boesky did in the insider-trading scandal of the 1980s. Shkreli paid $2 million for a Wu-Tang Clan album and expressed no remorse about raising the price of the antiparasitic drug Daraprim by 5,000 percent, bragging he’d do so again if he could find another medicine to exploit. Excoriated by Congress, he then called U.S. senators “imbeciles.”

The trial was catnip for the city’s tabloids. “‘Pharma Bro’s’ steamy emails with gay investor read in court,” declared one headline in the New York Post, while the Daily News offered: “Potential jurors in ‘Pharma Bro’ trial too disgusted to serve.” Reporters from as far away as the Netherlands showed up in Brooklyn to watch the proceedings.

For all his over-privileged behavior, Shkreli grew up in a working-class family of immigrants from Albania and Croatia. Born in Brooklyn, he attended public Baruch College and first worked at a hedge fund as a 19-year-old intern.

His father, a janitor, never missed a day of trial. He could be found sitting in the same spot in the back row of the courtroom, the one reserved for friends and family. Sometimes he would take off his shoes, hug one knee and listen as witnesses and prosecutors called his son a liar.

The driest of documents could have been enough to prove that Shkreli lied to investors. Shkreli claimed to be a successful Wall Street money manager overseeing as much as $100 million. But bank records showed that one fund fell to minus 33 cents and never had more than $3 million. He said the fund outperformed the S&P 500 stock-index, when it actually posted disastrous losses, leaving investors with next to nothing in their accounts.

The paper trail revealed that Shkreli was using hedge-fund money to build Retrophin, which developed drugs for rare and deadly diseases. He then secretly compensated investors for their losses with Retrophin shares. In some cases, it took years to make his clients whole. Still, they made thousands of dollars — some even millions.

Shkreli handed out shares in Retrophin that he valued below $3, and that had restrictions making them difficult to sell. Still, once the company became public, shares surged and traded for as much as $36.10 in August 2015. They still fetch about $20.

As Retrophin prospered, Shkreli nevertheless became even more abusive. The jury heard how he threatened the families of employees who crossed him. “I hope to see you and your 5 children homeless and will do whatever I can to assure that,” he said in one letter that he mailed to the wife of one of the witnesses. “Your husband’s arrogance is infuriating and making an enemy out of me is a huge mistake.”

While Retrophin’s board valued Shkreli’s ideas, they removed him as CEO, saying he lacked the leadership skills to run a complex business, and his abusive Twitter comments were inappropriate for the CEO of a public company. Even then, the threats continued.

“He told me I’d be subjected to unremitting litigation and my family would suffer as a result of our actions,” Steve Aselage, his successor, said on the witness stand.

Prosecutors said Shkreli made comments about “hooking up” with random men in an attempt to get close to a gay investor, who said he and Shkreli would sign email exchanges “love you.” When the investor asked Shkreli if he felt any attraction, the CEO said no. The defense produced emails they said were proof that the investor was trying to take advantage of their client.

Ultimately Shkreli made only one conventional legal decision: Like most white-collar defendants, he didn’t take the stand because his words could’ve been used against him.

Through their cross examination, his attorneys Brafman and Marc Agnifalo highlighted another side of Shkreli, the hard-working, self-taught biochemist and whiz kid.

Here, jurors heard raves from the prosecution’s own witnesses. He “trades like a machine,” was “the brightest intellect I’ve ever run into,” “a visionary” and “stunningly smart.”

Investors nicknamed him “Rain Main” after actor Dustin Hoffman’s autistic savant character in the 1988 Academy-Award winning film. Day and night, he would focus on a single market. While building Retrophin, witnesses said, Shkreli would work around the clock with a sleeping bag in his office, often at the expense of his health and his hygiene.

After he derided prosecutors as the “junior varsity,” the judge warned him to stop talking about the case around the courthouse.

So, Shkreli made his views known in other ways. He beamed when he heard praise. He winked at his father. He wrapped his arms around himself, raised his eyebrows and smiled at reporters when he thought the case was going well. Always a fierce critic of negative coverage, he managed to convey his displeasure to journalists in a way that best summed up his attitude toward convention. He stuck out his tongue.