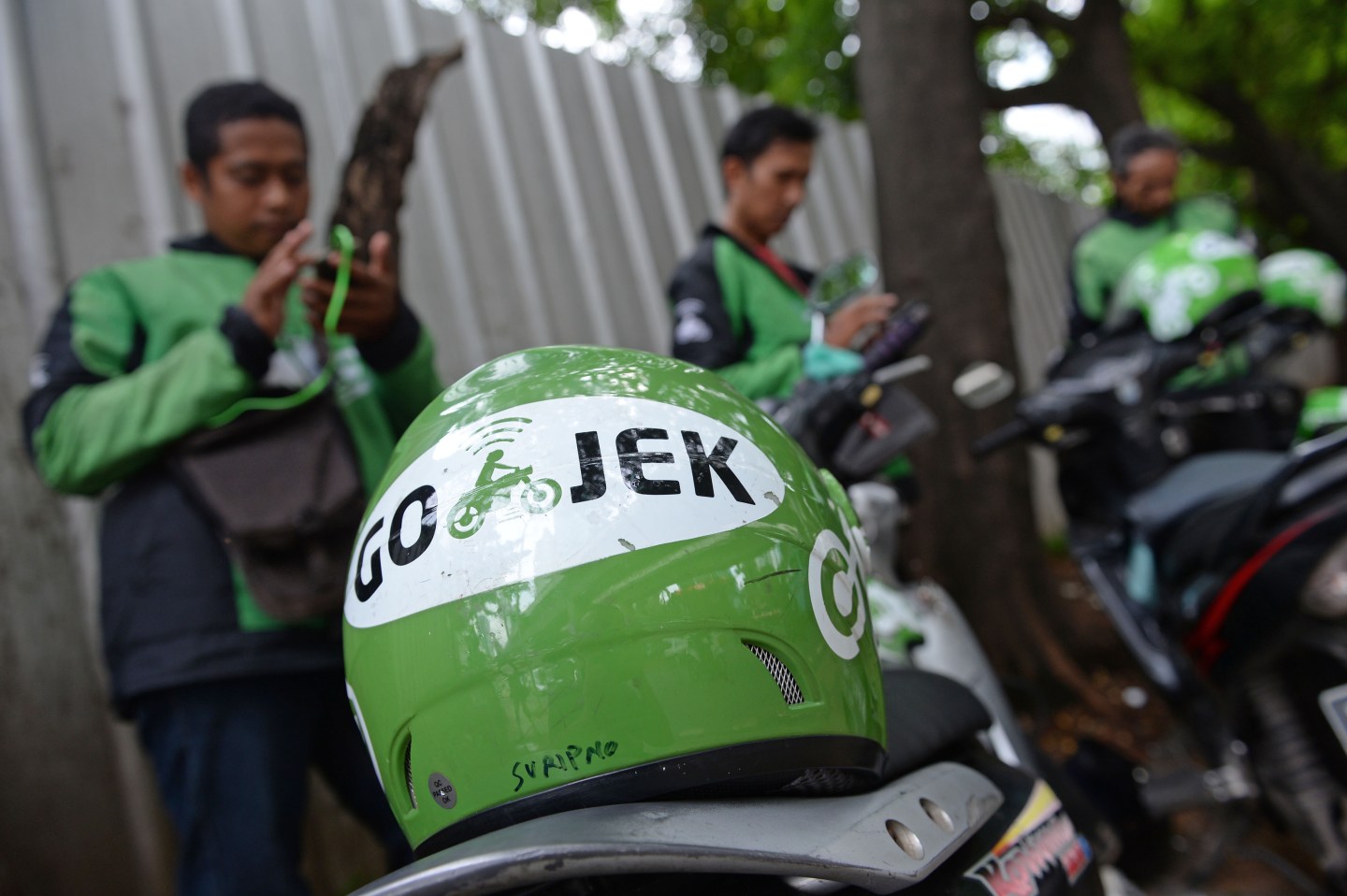 A Go-Jek Indonesia Pt. helmet sits on a motorcycle taxi as riders check their mobile devices in Jakarta, Indonesia on Sunday, March 20, 2016. The Jakarta-based startup has already become a household name in its home country. The startup's app has been downloaded more than 11 million times and it has more than 200,000 motorbikes. Its name is a play on ojek, the Indonesian word for the motorcycle taxis that crisscross Southeast Asia's most populous nation. Photographer: Dimas Ardian/Bloomberg via Getty Images
Dimas Ardian—Bloomberg/Getty Images

Three years ago, Ferly Aninditya’s stall at a Jakarta food court was losing money. Deterred by the Indonesian capital’s paralyzing traffic, few customers were prepared to come to him.

But that was before he teamed up with Go-Jek, the ride-hailing motorbike service that delivers everything from meals and groceries to cleaners and hairdressers across Jakarta, all at the touch of a smartphone app.

Now Aninditya owns a chain of small restaurants with seven thriving branches that send Indonesian-style fish and chips by Go-Jek’s army of motorbike riders across Jakarta.

“I’ve come this far in part because of Go-Jek,” said Aninditya. “It’s not just sales, but they also helped by spreading our brand through the app.”

Go-Jek has become a crucial workaround in a city with some of the worst traffic in the world. The service’s riders can move goods and people faster around the city than cars, helping businesses increase sales dramatically as they reach more consumers.

Go-Jek, a play on the local word for motorbike taxis, ojek, was set up by Nadiem Makarim, a graduate of the Harvard School of Business and a former associate with McKinsey, who has quickly become a poster child for start-up success in Indonesia.

Bank Indonesia, the central bank, is studying that economic impact. The bank’s chief fintech officer, Junanto Herdiawan, said data was still being collected, but the initial findings were “quite remarkable.” He added: “It could be a game-changer should society keep benefiting from Go-Jek’s services.”

Sri Hartati, the head of the Jakarta government’s Economics Bureau, said Go-Jek has had a “big” impact on consumption and trade in the city. “It has changed people’s behaviour, that’s for sure.”

The Indonesia Franchise association estimates its members saw revenue improve 30% on average after using Go-Jek. The Association of Hotels and Restaurants says Go-Jek has increased sales by 15-20% for most of its 3,000 members in Jakarta.

Companies pay a percentage of sales to Go-Jek; Aninditya says he pays 15%.

Eggi Banon, a 45-year-old beautician, signed up with the app this month and says she has already seen business increase.

“It turns out it’s more profitable working through an app, rather than waiting at my salon,” said Banon, who now hops on a motorbike and leaves the salon when clients order her services through Go-Jek. Other companies supply cleaners or masseurs, or dispatch a dizzying array of products – flowers, medicine, movie tickets, cameras and eyeglasses.

A Go-Jek spokeswoman declined to say whether the company itself, which is not listed, was profitable. Media reports put the value of the start-up at $2 billion when a funding round started this year.

Most of Go-Jek’s business is centred on Jakarta, but the company also has smaller operations in 24 other cities and is considering expanding to 10 more, capitalizing on transport and logistics shortfalls that have long hobbled Indonesia’s economy.

The World Bank estimates that because of traffic jams, every 1% growth in urbanization in Indonesia delivers only 4% of long-term GDP growth, compared with 13% in India and 10% in China.

Not everybody is happy about Go-Jek and the emergence of other ride-hailing services. Indonesia’s largest taxi operator, PT Blue Bird Tbk, lost three quarters of its market value over a 20-month period from the beginning of 2015, which coincided with the emergence of Go-Jek, as well as the international ride-hailing brands Uber and Grab.

Blue Bird’s shares have since recovered after announcing a partnership with Go-Jek that allows customers to order cabs through the Go-Jek app. But they remain well below 2015 peaks.

“It does make us feel that we have to improve our services,” said Mohammad Feriadi, the president director of JNE.

Go-Jek’s success also relies on pricing and the ubiquity of its riders, which means that many are now working longer hours to match the earnings they were making in the app’s early days when the team was smaller. Today, Go-Jek uses an estimated 250,000 riders, most of them in Jakarta.

Go-Jek, though, says it increases job opportunities for low-skilled workers.

“It’s a fair market,” said Monica Oudang, who heads human resources at Go-Jek. “If the price is too low, then no drivers would take the order. If it’s too expensive, then customers won’t use it.”

Regulators are also examining Go-Jek and its activities.

Hartati, from Jakarta‘s economic bureau, said she was concerned about safety, but was not considering issuing regulations at this stage.

Some academics have also raised concerns about the systemic risks of a company like Go-Jek becoming too ubiquitous. If businesses and consumers rely too much on it, they say, any problems for the company could have ripple effects for the entire economy.

“Go-Jek can create customer dependence,” said Telisa Falianty, a lecturer at University of Indonesia. “When customers have no other options, it could be troublesome.”