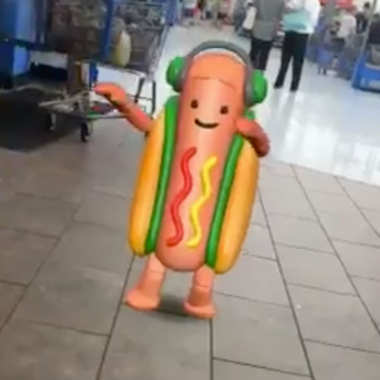 And now it’s a meme.

Snapchat users started posting videos and photos of a new filter available on the app of the dancing hot dog, placing it in different — and sometimes dire — situations. One video shows the hot dog getting run over by an incoming BART train, and another shows one getting hit by what appears to be a light saber.

Users can find the dancing hot dog by opening the in-app camera and tapping the screen until the options for different filters appear. The hot dog is now one of the filters and can be made larger or smaller, moved around the screen and moved while a video is being taken. (That’s how users were able to put the hot dog in the disastrous situations above.)

The hot dog can be added to photos or videos. It is unclear when the filter first became available.

Snapchat regularly releases new filters — whether they’re for users’ faces or for the world around them.

The app also recently released a new mapping feature — called Snap Map — that has received mixed reviews from consumers. Users can decide to share their location with the feature, which will link their Bitmoji account to a map of the world, showing where they are currently located.