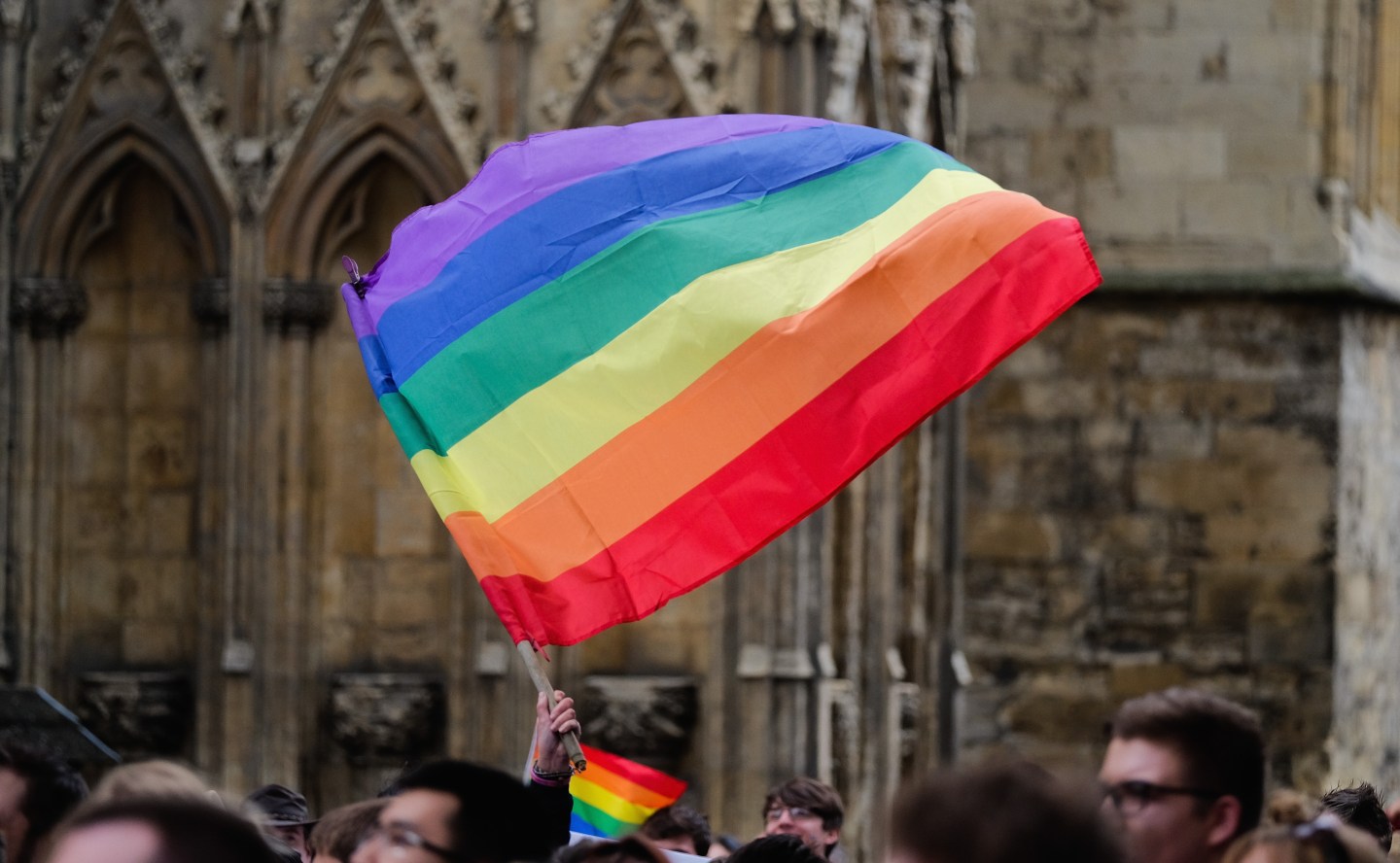 YORK, ENGLAND - JUNE 18: A rainbow flag is flown in front of York Minster as hundreds of people take part in the annual LGBT York Pride parade on June 18, 2016 in York, England. The parade made its way through the streets of the city centre before reaching the Knavesmire area of the city where live entertainment was performed for the crowds. York Pride aims to raise awareness of lesbian, gay, bisexual and transgender (LGBT) issues both in the UK and abroad, seeking to promote equality and eliminate discrimination on the grounds of sexual orientation and gender identity. There was a two-minute silence and balloon release at the start of York Pride to pay tribute to the victims of the mass shooting that took place at LGBT nightclub Pulse in Orlando, Florida, USA. (Photo by Ian Forsyth/Getty Images)
Photo by Ian Forsyth—Getty Images

June is pride month, a chance to celebrate victories for many lesbian, gay, bisexual, transgender and queer (LGBTQ) people who have seen their civil rights expand in the last decade. From representation in the media to the legalization of same-sex marriage in 2015, the LGBTQ population have gained many of the basic rights that most Americans take for granted. However, even as many Fortune 500 companies include and embrace their LGBTQ employees, employment discrimination is still rampant in many states.

Some argue that providing protections for LGBTQ individuals in the workplace violates religious freedom while others prohibit discrimination against LGBTQ workers if they work for the state but have no law extending to private sector employers. Twenty-eight states have laws prohibiting employment discrimination based on sexual orientation for public employees according to Lambda Legal.

In the visual below, we compared the legal protection each state offers against discrimination based on sexual orientation and gender orientation. We determined that a state could pass 4 different laws, each focusing on a population—sexual minorities or gender minorities—and an area of employment—public/state employment or private employment.

In April, the 7th circuit court of appeals ruled in favor of Kimberly Hively who sued Ivy Tech Community for violating Title VII of the Civil Rights Act of 1964. Hively argued the school denied her employment after finding out about her romantic relationship with another woman according to NBC News. A case concerning employment discrimination like this has yet to reach the Supreme Court.

The laws in some states may not have changed to protect LGBT workers, but individual American attitudes have changed considerably in the last decade. Last year, 63% of Americans said homosexuality should be accepted by society according to a Pew Research Center survey. In comparison, 51% of Americans, a slim majority, agreed with that statement in 2006. These individual American attitudes may have changed corporate culture seeing that 89% of Fortune 500 companies implemented their own policies prohibiting discrimination based on sexual orientation according to Human Rights Campaign.