A Van Rams Worshipers Leaving a London Mosque, Killing at Least One 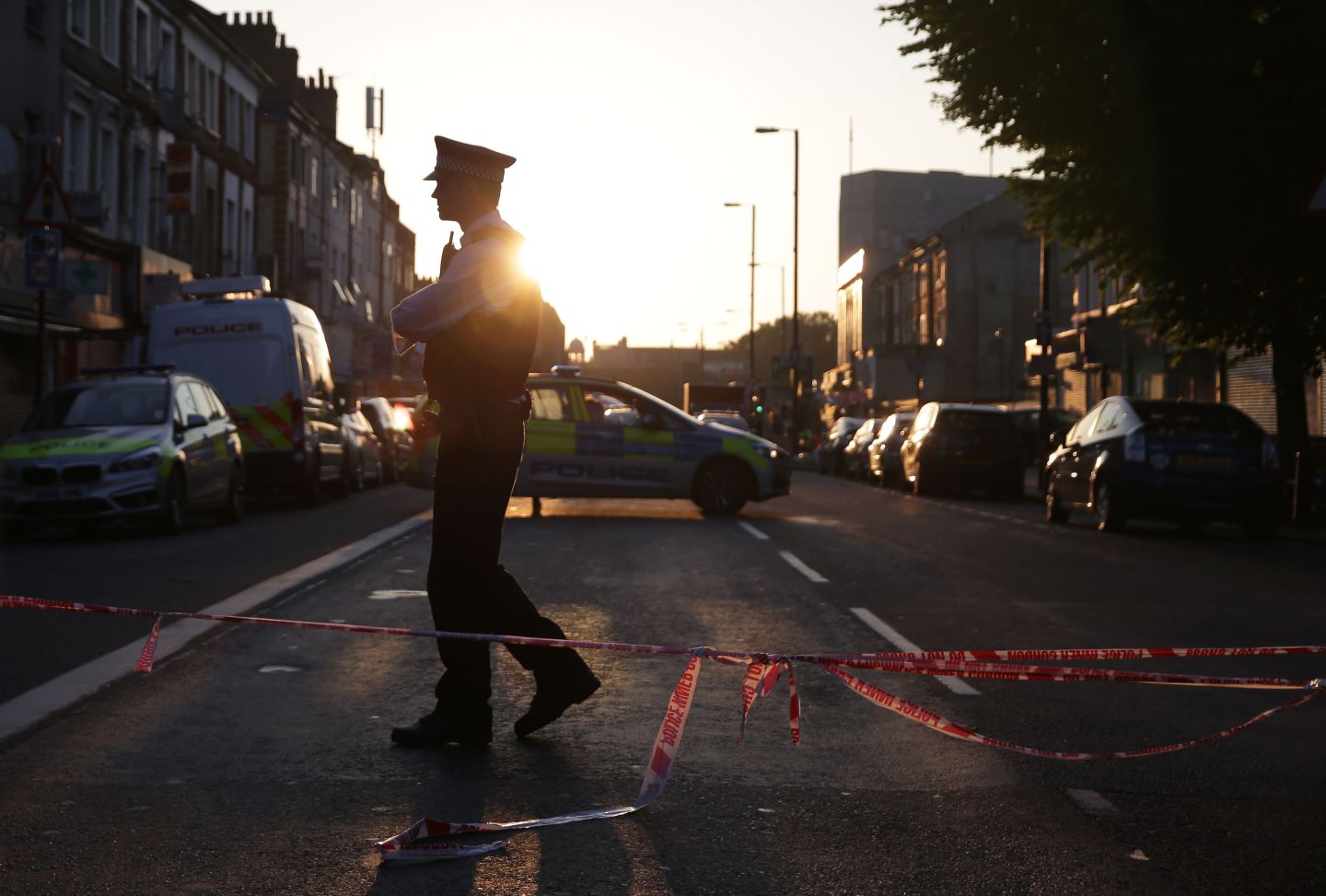 A police officer guards a street in the Finsbury Park area of north London after a vehichle hit pedestrians, on June 19, 2017. One man was killed and eight people hospitalised when a van ran into pedestrians near a mosque in north London in an incident that is being investigated by counter-terrorism officers, police said on Monday. The 48-year-old male driver of the van "was found detained by members of the public at the scene and then arrested by police," a police statement said. / AFP PHOTO / Daniel LEAL-OLIVAS (Photo credit should read DANIEL LEAL-OLIVAS/AFP/Getty Images)
DANIEL LEAL-OLIVAS AFP/Getty Images

LONDON — A van ploughed into worshippers leaving a London mosque on Monday, killing at least one person and injuring 10 others in what witnesses said was a deliberate attack on Muslims.

The incident was being treated as a potential terrorist attack said Prime Minister Theresa May, which if confirmed would make it the fourth since March in Britain and the third to involve a vehicle deliberately driven at pedestrians.

Shortly after midnight, the hired vehicle swerved into a group of people leaving prayers at the Finsbury Park Mosque, one of the biggest in the country, witnesses said. The attack comes during the Muslim holy month of Ramadan.

“This big van just came and went all over us,” witness Abdulrahman Saleh Alamoudi told BuzzFeed News. “He (the driver) was screaming… ‘I’m going to kill all Muslims’.”

Police said one man was pronounced dead at the scene and the van driver, aged 48, had been detained by members of the public before being arrested. The driver would undergo a mental health assessment, police said.

Eight people were taken to hospital and two were treated at the scene. Usain Ali, 28, who was near the mosque at the time, said he heard a bang and ran for his life.

“When I looked back, I thought it was a car accident, but people were shouting, screaming and I realised this was a man choosing to terrorize people who are praying,” he told Reuters. “He chose exactly the time that people pray, and the mosque is too small and full, so some pray outside.

The attack comes at a time of political turmoil in Britain, as Prime Minister May, weakened by the loss of her parliamentary majority in a June 8 election, plunges into divorce talks with the European Union.

She has faced heavy criticism for her response to a fire in a London tower block last Wednesday which killed at least 58 people, and for her record on security after a series of attacks blamed on Islamist militants in recent months.

“All my thoughts are with the victims, their families and the emergency services on the scene,” May said, adding that she would chair an emergency response meeting later on Monday.

The mayor of London, Sadiq Khan, said extra police had been deployed to reassure communities, especially those observing Ramadan, describing the attack as “an assault on all our shared values of tolerance, freedom and respect”.

The leader of the opposition Labour Party, Jeremy Corbyn, in whose constituency the attack took place, said he was “totally shocked”.

The incident comes just over two weeks after three Islamist militants drove into pedestrians on London Bridge and stabbed people at nearby restaurants and bars, killing eight. .

It also follows a suicide bombing at a pop concert in Manchester, northern England, in May which killed 22, while in March, a man drove a rented car into pedestrians on Westminster Bridge in London and stabbed a policeman to death before being shot dead. His attack killed five people.

Police had said hate crimes had risen after the London Bridge attack and they had stepped up their visible presence at places of worship.

The Muslim Council of Britain said Monday’s attack was the most violent manifestation of Islamophobia in Britain in recent months and called for extra security at places of worship.

“It appears that a white man in a van intentionally ploughed into a group of worshippers who were already tending to someone who had been taken ill,” the council said in a statement.

The incident occurred almost exactly a year since the murder of lawmaker Jo Cox who was shot dead by a man obsessed with Nazis and extreme right-wing ideology. There had been a number of events over the weekend to commemorate her life.

“We must all continue to stand together, resolute, against all those who try to divide us and spread hate and fear,” said British interior minister Amber Rudd.

Police said they were called just after 12:20 a.m. (2320 GMT Sunday) to reports of a collision on Seven Sisters Road, which runs through the Finsbury Park area of north London.

“From the window, I started hearing a lot of yelling and screeching, a lot of chaos outside … Everybody was shouting: ‘A van’s hit people, a van’s hit people’,” one woman who lives opposite the scene told the BBC.

One witness told CNN it was clear that the attacker at Finsbury Park had deliberately targeted Muslims.

“He tried to kill a lot of people so obviously it’s a terrorist attack. He targeted Muslims this time,” the witness, identified only as Rayan, said.

Other witnesses told Sky television that the van had hit at least 10 people. The Evening Standard newspaper said the van appeared to have been rented in Wales, although there was no immediate confirmation of this from the authorities.

Miqdaad Versi, assistant secretary general of the Muslim Council of Britain, said the van had deliberately swerved into a group of people who were helping a man who was ill and had fallen to the ground.

“Basically, a van swerved into them deliberately,” Versi told Reuters, citing a witness.

He said the driver had run out of the van but a group of people caught him and held him until police arrived.

The Finsbury Park Mosque gained notoriety more than a decade ago for sermons by radical cleric Abu Hamza al-Masri, who was sentenced to life in a U.S. prison in January 2015 after being convicted of terrorism-related charges.

A new board of trustees and management took over in February 2005, a year after Abu Hamza was arrested by British police, since when attendance has greatly increased among worshippers from various communities, according to the mosque’s website.

Members of the congregation in the two mosques in the area are mainly from North and West Africa.