Brexit Negotiations Are Set to Begin Amid the U.K.’s Political Turmoil 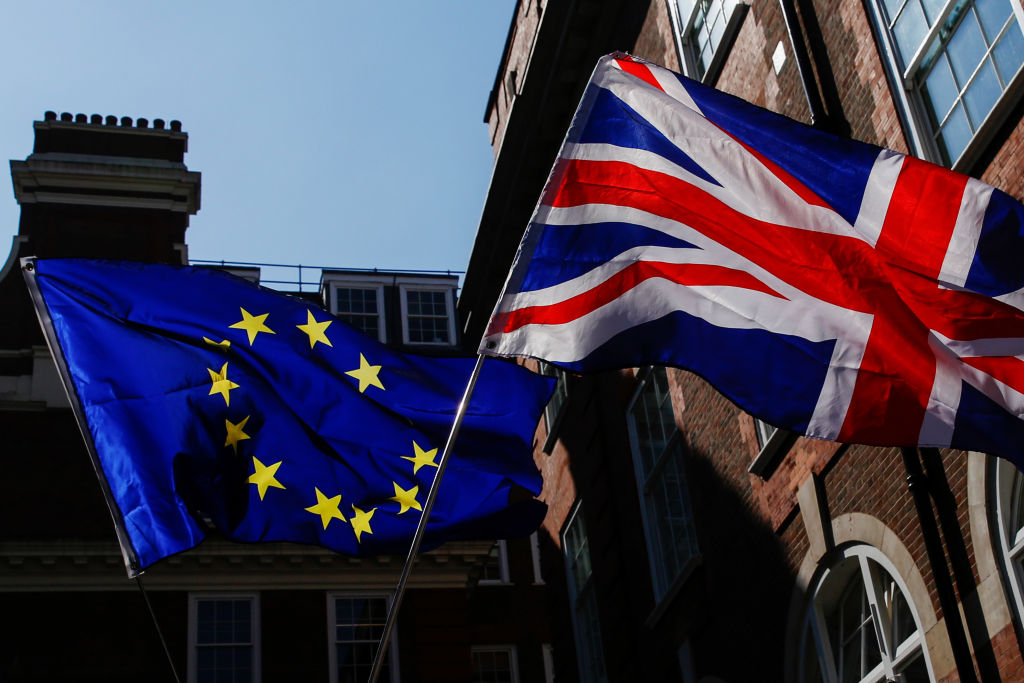 Campaigners wave an EU flag and a Union Jack during an anti-Brexit demonstration outside the Conservative Party election campaign headquarters in London, May 26, 2017.
Luke MacGregor—Bloomberg/Getty Images

Brexit Secretary David Davis starts negotiations in Brussels on Monday that will set the terms on which Britain leaves the European Union and determine its relationship with the continent for generations to come.

Almost a year to the day since Britons shocked themselves and their neighbors by voting on June 23 to cut loose from their main trading partner, and nearly three months since Prime Minister Theresa May locked them into a two-year countdown to Brexit in March 2019, almost nothing about the future is clear.

Even May’s own immediate political survival is in doubt, 10 days after she lost her majority in an election.

Davis, who unlike May has long campaigned to leave the EU, will meet chief EU negotiator Michel Barnier, a former French minister, at the European Commission’s Berlaymont headquarters at 11 a.m. (0900 GMT). They are due to give a joint news conference after talks among their teams lasting seven hours.

Officials on both sides play down expectations for what can be achieved in one day. EU diplomats hope this first meeting, and a Brussels summit on Thursday and Friday where May will encounter – but not negotiate with – fellow EU leaders, can improve the atmosphere after some spiky exchanges.

“Now, the hard work begins,” Davis said, adding he wanted a deal that worked for both sides.

“These talks will be difficult at points, but we will be approaching them in a constructive way.”

Barnier, a keen mountaineer, spent the weekend in his native Alps “to draw the strength and energy needed for long walks”.

Davis’s agreement to Monday’s agenda led some EU officials to believe that May’s government may at last coming around to Brussels’ view of how negotiations should be run.

May’s election debacle has revived feuding over Europe among Conservatives that her predecessor David Cameron hoped to end by calling the referendum and leaves EU leaders unclear on her plan for a “global Britain” which most of them regard as pure folly.

While “Brexiteers” have strongly backed May’s proposed clean break with the single market and customs union, finance minister Philip Hammond and others have this month echoed calls by businesses for less of a “hard Brexit” and retaining closer customs ties.

With discontent in europhile Scotland and troubled Northern Ireland, which faces a new EU border across the divided island, Brexit poses new threats to the integrity of the United Kingdom.

It will test the ingenuity of thousands of public servants racing against the clock to untangle 44 years of EU membership before Britain is out, 649 days from now, on March 30, 2019. For the officials sitting down on Monday, at least on the EU side, a major worry is Britain crashing out into a limbo, with no deal.

For that reason, Brussels wants as a priority to guarantee rights for 3 million EU citizens in Britain and be paid tens of billions of euros it says London will owe on its departure.

With a further million British expatriates in the EU, May too wants a deal on citizens’ rights, though the two sides are some way apart. Agreeing to pay a “Brexit bill” may be more inflammatory.

Brussels is also resisting British demands for immediate talks on a future free trade arrangement. The EU insists that should wait until an outline agreement on divorce terms, ideally by the end of this year. In any case, EU officials say, London no longer seems sure of what trade arrangements it will ask for.

But Union leaders, including German Chancellor Angela Merkel and French President Emmanuel Macron, are also determined not to make concessions to Britain that might encourage others to follow.

When 52% of British voters opted for Brexit, some feared for the survival of a Union battered by the euro crisis and divided in its response to chaotic immigration. The election of the fervently europhile Macron, and his party’s sweep of the French parliament on Sunday, has revived optimism in Brussels.