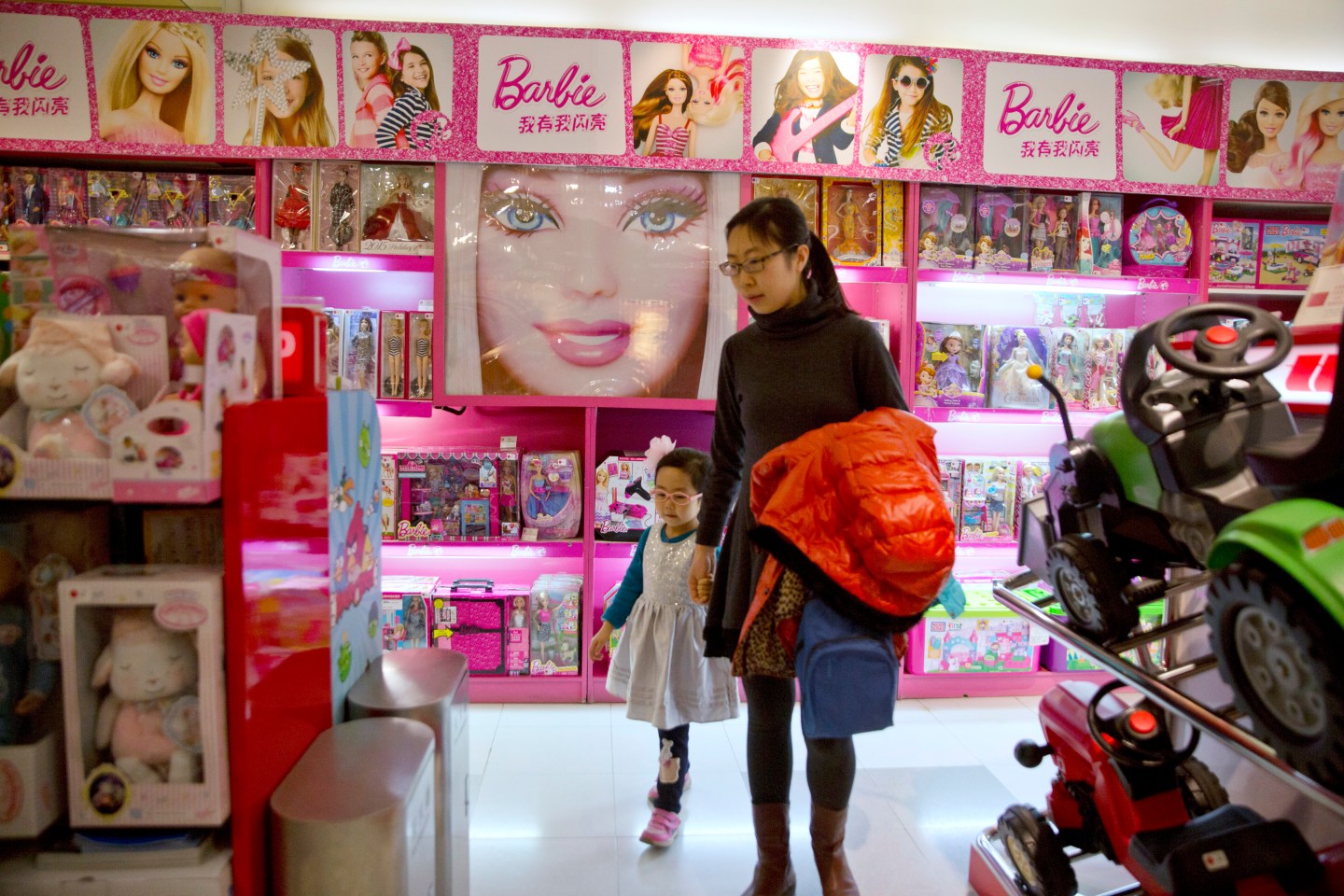 In this Saturday, Feb. 27, 2016, photo, a woman and child walk past a display of Barbie dolls at a store in Beijing, China. Sophisticated cyber-thieves tricked Mattel Inc., the Los-Angeles based maker of Barbie dolls into sending over $3 million to a Chinese bank account they controlled. Mattel's millions were swept up in a tide of dirty money that passes through China, which Western police are only beginning to understand. (AP Photo/Ng Han Guan)
Ng Han Guan—AP

Mattel expects to grow three to four times in the more than $31 billion toys and games market in China by 2020 through digitally connected toys, as it intensifies its efforts to take on LEGO Group and Hasbro Inc in the country.

Mattel — which cut its dividend by more than half to fund the new efforts — said its emphasis on e-commerce and repackaging its core brands as educational toys and connecting them to the internet would propel its position in the fragmented market.

The toymaker has about 2 percent market share in China, lagging behind construction toy maker LEGO which has 2.8 percent control over the market. Hasbro is catching up with 1 percent, according to Euromonitor International.

The new, digitally connected toys will be launched globally in fall 2018, the company said on Wednesday.

“In China, there is a lot of recognition on linear learning and development. There is a real need for development of EQ, primary motor skills and social-emotional skills,” Mattel’s Chief Executive Margo Georgiadis said.

Georgiadis, a former Google executive, took over the reins of the toy company in February and was hired for her tech expertise and e-commerce know-how.

Mattel also said it would launch a network of play clubs with retail spaces to sell its toys in a joint venture with investment company Fosun Group adding to a slew of major tie-ups in China.

The joint venture is the third major partnership after Alibaba and Baby Tree, aimed at promoting the company’s educational products.

One such product is Mattel’s Hotwheels Speedometry, play-based lessons which teach children about subjects such as measurement, distance, potential and kinetic energy, through building miniature race tracks.

The company said it aims to enmesh more educational content with other brands such as Fisher-Price and Thomas & Friends, which are popular in the Asian country.

For more on toys and China, see Fortune’s video:

“As we think about the opportunity in China … it is driven by the basic fact that there are 210 million kids in China, while there are 55 million in the US,” Georgiadis told Reuters.

“Just the sheer size of the market … it’s an enormous market opportunity.”