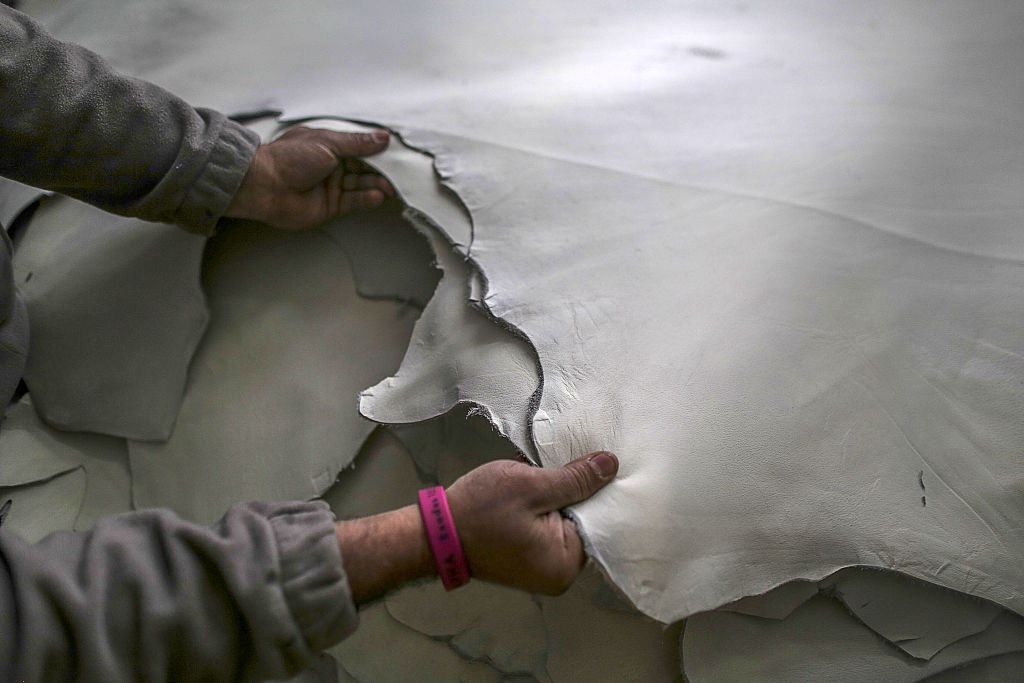 In the backstreets of Agra’s Muslim quarter, where shoes have been made for centuries, small-scale manufacturers are firing workers and families cutting back on spending as a government crackdown on cattle slaughter ripples through the community.

The election of Indian Prime Minister Narendra Modi of the Hindu nationalist Bharatiya Janata Party (BJP) three years ago has emboldened right-wing Hindu groups to push harder for protection of the cow, an animal they consider sacred.

Last month Modi’s government also banned trading cattle for slaughter, including not just cows, whose killing was already outlawed in most states, but also buffalo, an animal used for meat and leather.

Now the squeeze is spreading to others in the Muslim minority and to lower-caste Hindus who cart cattle, labour in tanneries and make shoes, bags and belts—including for big name brands such as Zara and Clarks.

Frequent attacks by right-wing Hindus against workers they accuse of harming cattle have further rattled the industry.

Much of India’s meat and leather trade takes place in the informal economy, meaning the impact of the closing of illegal abattoirs and ban on trading for slaughter is hard to measure.

But cattle markets are reporting a big slowdown in trade and tanneries a shortage of hides.

Abdul Faheem Qureshi, a representative of India’s Muslim Qureshi community of butchers, said in Uttar Pradesh some markets trading 1,000 animals last year were now down to as few as 100.

The decline in production means fewer jobs for two of India’s poorest communities, and risks inflaming social tensions at a time when Modi has vowed to boost employment and accelerate economic growth ahead of the next general election in 2019.

Bigger exporters also say they have enough leather as they source hides widely, including from abroad.

Still, millions work in the meat and leather industries, which are worth more than $16 billion in annual sales.

When Reuters visited the narrow shoemaking lanes of Agra a crowd of Muslims breaking their Ramadan fast gathered, shouting angrily that they were no longer safe to trade buffalo, buy cow leather for shoes or to do work that their community has done for centuries for fear of being attacked by Hindu vigilantes.

“They want to weaken us. They want to snatch our bread,” says 66-year-old Mohammad Muqeem, whose workers stitch $3 shoes in his cellar, referring to the closure of slaughterhouses and recent attacks on cattle traders.

Muqeem’s monthly income has halved to $300 since last year as leather has become scarce. His dozen casual workers, down from 40, now use mostly synthetic materials.

Like meat, India’s leather industry has expanded rapidly in the last decade, providing relatively well-paid factory work and cash for families stitching informally in their homes.

Agra, in Uttar Pradesh, turns out a million pairs of shoes a day for domestic buyers and European labels such as Inditex-owned Zara and Clarks. An estimated 40 percent of the population of the northern Indian city, famed as the home of the Taj Mahal, depends on the industry.

Clarks said in a statement that it does not use leather from Indian-origin cows and that the small amount of buffalo leather it sources from India had not been impacted. Zara and did not respond to requests for comment.

India is one of the world’s top five producers of leather, with skins coming from cows that die of natural causes or from the legal slaughter of buffalo.

Modi’s government is targeting leather revenues of $27 billion—more than double today’s level—by 2020 as part of a job creation push.

But in May, the government decreed that animal markets could only trade cow and buffalo for agricultural purposes such as ploughing and dairy production – a move many in the industry say contradicts its plans to grow leather sales.

India’s environment minister said this week the government could amend the rule after a court temporarily stayed the order and there was widespread anger in regions where meat and leather are important to the local culture and economy.

But industry officials said the shock of the ban, coming on the heels of the crackdown on abattoirs and attacks against cattle workers, meant business would not easily recover.

Companies say the government’s leather target would be impossible to meet unless the restrictions are reversed.

“There is a lot of panic in the industry after the latest order, which has come as the biggest blow,” Puran Dawar, chairman of Agra-based exporter Dawar Footwear Industries, said as hundreds of workers moulded shoes on the factory floor, referring to the ban on cattle traded for slaughter.

“There are grave concerns about the supply of leather, exports of shoes and overall employment.”

India’s commerce ministry did not respond to requests for comment.

In Uttar Pradesh, Chief Minister Yogi Adityanath, a controversial Hindu priest, had made closing unlicensed slaughter houses a priority after Modi appointed him in March.

About 30% of hides, mostly from buffaloes, that supply tanneries in the state are from unlicensed abattoirs.

Sitting in his one-room shop in Agra’s leather market, Mohammad Hashim, a burly leather dealer in his sixties, said business was down 40% in the last three months.

The recent scarcity of hides had hurt Hindus as much as Muslims, he said, pointing to the quiet streets outside and a Hindu man struggling to sell puffed rice snacks from his cart.

Modi’s election in 2014 and a resurgence in right-wing Hindu activism have increased concerns among Muslims that their livelihoods are under attack. As a minority making up 14% of India’s 1.3 billion people, they are generally poorer and less literate than majority Hindus.

When worshippers finishing evening prayers at the Mughal-era mosque in the shoemaking quarter of Agra are asked whether the chief minister handpicked by Modi is to blame, one of the Imams thunders: “Modi is to blame. He is targeting Muslims.”

In an interview with Reuters, Chief Minister Adityanath rejected accusations the BJP had targeted any specific group.

“Illegal slaughterhouses operated across the state and many big and small leather traders were buying raw material at cheapest rates from unlicensed slaughterhouses to maximise profits,” he said in Lucknow, the state capital.

In the industrial city of Kanpur, 250 km (155 miles) east of Agra, tanneries processing buffalo skins are reporting job losses as the availability of hides dries up.

Nayyar Jamal, general secretary of Kanpur’s Small Tanners’ Association, reckons as many as 400,000 employees in Kanpur’s leather and related industries are temporarily jobless, including some laid off because of environmental curbs on tannery pollution. Supplies of local hides have dropped by 20 to 30%.

Qureshi, from the butchers’ organisation, estimates that 3.5 million employees in Uttar Pradesh alone have been directly hit.

“More than the economic loss, the government has injected fear,” said Chandra Bhan Prasad, a writer and businessman from the Dalit community, as those at the bottom of Hinduism’s social hierarchy once called “untouchables” are known. Dalits and Muslims often work in trades that higher-caste Hindus traditionally consider beneath them.

Tannery owner Mohammad Ikram said he was only able to procure 4,000 hides a month—down from 25,000—because even truckers transporting legally obtained cow or buffalo hides fear attacks from vigilantes. He has a month’s inventory left, and when that runs out he will have to start shedding staff.

Shahnawaz Qureshi, a wage labourer stuffing synthetic shoes into plastic bags in Muqeem’s cellar in Agra, lost his last job after his employer could no longer afford leather.

He now earns 3,000 rupees—or $47—a month, down from 4,500 in his previous job, and together with his father’s income supports three sisters and his mother.

“I decided to sign up for this job despite the fact that I earn reasonably less here,” he said.