Sweden’s Employment Minister: European Countries Should Have Shared the Influx of Refugees Fairly 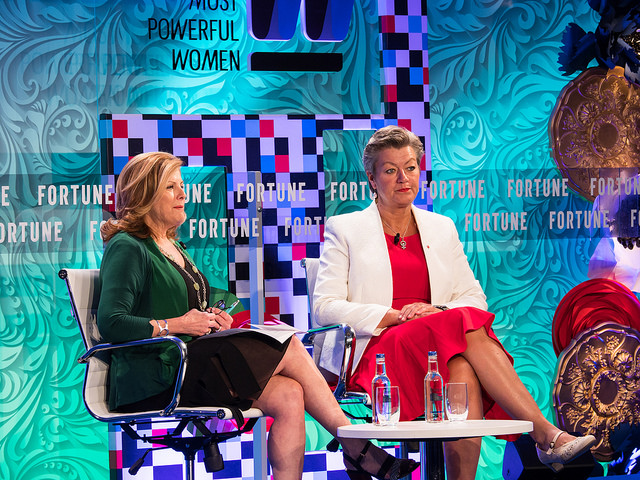 Ylva Johansson, Sweden's Minister of Employment and Integration, at the Fortune Most Powerful Women Summit at the Dorchester Hotel, London, on June 12 2017. Pictures by Peter Dench for Fortune Magazine.

For a country of fewer than 10 million people, Sweden took in an impressive 160,000 refugees—2% of the country’s total population—during the height of Europe’s migrant crisis in 2015.

But Ylva Johansson, the nation’s Minister of Employment and Integration, believes that Sweden—and the rest of Europe—could be doing more to help those fleeing from war, famine, natural disasters, and other crises.

“In 2015, 70,000 children and teenagers came to Sweden, half without their parents,” Johansson told the Fortune Most Powerful Women International Summit at the Dorchester Hotel in London on Tuesday. “That makes 35,000 unaccompanied minors, who are mostly teenage boys.”

Johansson added that she could not imagine having to tell her 16-year-old son that she could not protect him and sending him off on a dangerous journey he may not survive. “I’d hope he would come to a good country and in the country people would see he was a good person,” she said. “It’s important to see that teenagers from Eritrea or Somalia are no different from our teenage boys.”

The Swedish politician, who initially wanted to be a math teacher, told the Summit audience that amount of refugees taken in by Sweden in 2015 was “unsustainable,” and the number is now around 30,000 a year following changes to asylum regulations. “Still, I think it’s more than any other European country according to population,” she said.

She added that she thought that if the countries of Europe had shared the “enormous” influx of refugees in the continent in 2014 in a fair way between them, the 2015 crisis could have been managed far more effectively. “The feeling I had in Sweden looking towards Europe was that country after country disappeared from the map,” she said. “There were just a few countries left; we were like islands.”

Johansson told the Summit that around 20% of Sweden’s population is anti-immigration. “A lot are concerned about how we can manage [certain] things,” she said. “I agree that we have a huge challenge ahead when it comes to housing. We also need better school results and are lacking school teachers.” But, she added, the country has an aging population and is lacking skilled people in many areas.

Johansson also spoke at the summit Monday evening, during which she told an anecdote about the first time she met with the King of Sweden, as a new mother 23 years ago.

“I was 30 and had just given birth to twins,” she said. “On my first day of appointment, I had to go to meet the King. I was sitting at his table, and, well, I was breastfeeding but I hadn’t for a while and what happened was it started coming out with the King [right there]. That was a bit embarrassing!”

Johansson said that as well as motivating her to buy a breast pump, the incident inspired her to use her newfound power to make it easier for other women to combine their family life with their work. “If you have the power you are obliged to use that power to pave the way for other women,” she told the Summit.