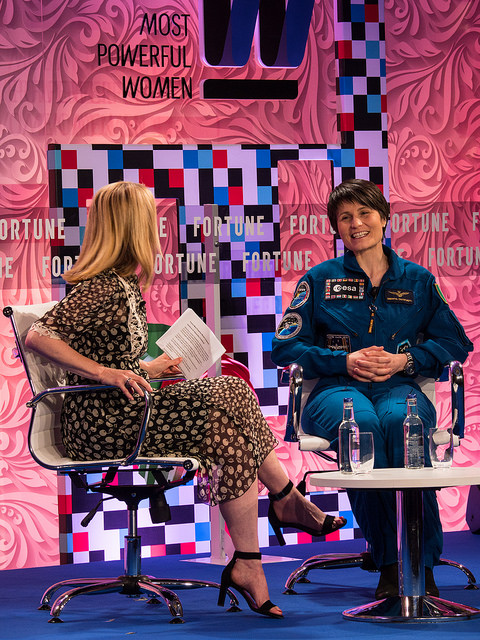 Being a good astronaut is not about your personal achievements, says Samantha Cristoforetti, the first Italian woman to go to space. What matters most is how well you work in a team.

Speaking at the Fortune Most Powerful Women International Summit at the Dorchester Hotel in London on Tuesday, Cristoforetti said that over the past 10 to 15 years, the emphasis on astronauts having a “go-go personality” has shifted.

Instead, she said, a major requirement is for men and women to bring something to the team and not throw the group off balance. “It’s more valuable to be someone who can empower others to work at their best than to be an individual achiever,” Cristoforetti told interviewer Trish Halpin, editor-in-chief of Marie Claire U.K.

Cristoforetti said that she had become fascinated by space as a young girl. “I was a Star Trek fan and I grew up in a tiny village in the Italian Alps where the night sky was present with little light pollution,” she told the Summit attendees. “As I grew up, I developed more mature interests and passions that kept me on the path for science and technology.”

The 40-year-old first went to space in 2014, five years after she was officially selected as an astronaut by the European Space Agency. Although embarking on such a dangerous 10-month mission would be enough to make anyone anxious, Cristoforetti said she felt quite calm on launch day.

“Taking off was a moment of peace,” she told the Summit. “At the end [of the pre-launch preparation], the pace really picks up. I was juggling travel, media work, and was at the center of a lot of demands from many people, which was all well meant, but it consumed all my energy. I was looking forward to [them closing the] hatch and being sealed off from the rest of the world.”

After a nine-minute assent into space and then a six-hour journey to the International Space Station, Cristoforetti said she was pleased to arrive. The astronaut gradually became known for uploading quirky videos onto YouTube from the ISS that demonstrated everyday life in space, from making a snack in zero gravity to doing her nails and hair.

“Although I was extremely well trained, [training] is a little different to actually learning to live in weightlessness,” Cristoforetti said. “It’s the coolest thing—everything is effortless and light.”

She explained to the Summit that learning to live in zero gravity requires going through three stages: the first being “losing everything,” the second “crazily attaching things” and the third being finding yourself “in a state of awareness where you let something float and you keep it in the back of your mind.”

Cristoforetti is hoping she’ll make her next flight to the ISS within the next decade and is interested in talks about future lunar missions. She told the Summit she’d also love to participate in a mission to Mars one day, but quickly added: “I’m not sure if I’d move there!”