Hanging in There – Theresa May Stays U.K. PM, For Now 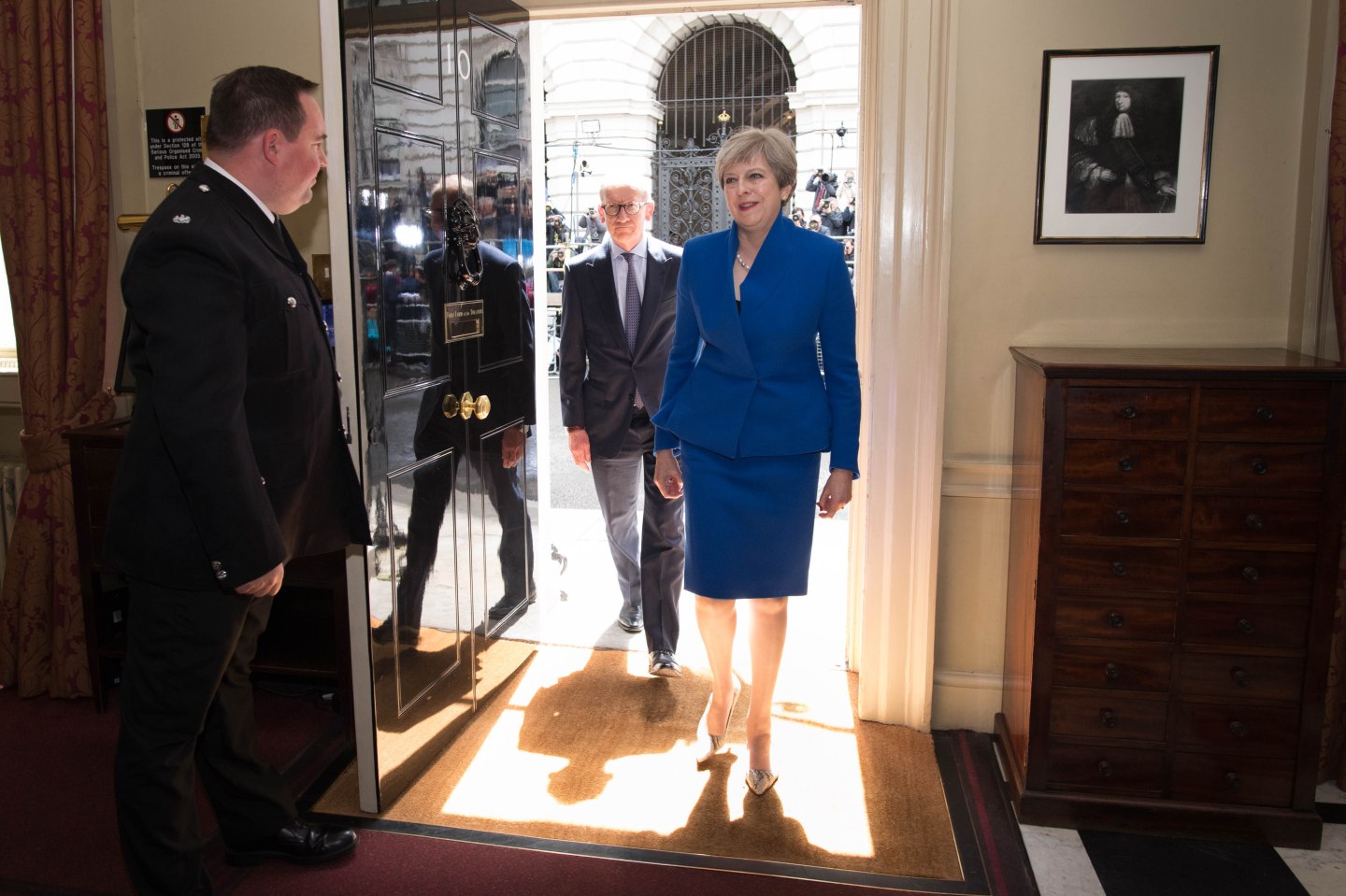 LONDON, ENGLAND - JUNE 09: British Prime Minister Theresa May and her husband Philip walk into into 10 Downing Street after returning from seeing Queen Elizabeth II at Buckingham Palace on June 9, 2017 in London, United Kingdom. After a snap election was called by Prime Minister Theresa May the United Kingdom went to the polls yesterday. The closely fought election has failed to return a clear overall majority winner and Theresa May has formed a minority Government with the support of Northern Ireland's Democratic Unionist Party. (Photo by Stefan Rousseau - WPA Pool/Getty Images)
WPA Pool Getty Images

No single party won an overall parliamentary majority in Britain’s June 8 snap election, severely diminishing the stature of Prime Minister Theresa May with only days to go before negotiations begin over withdrawal from the European Union.

May’s Conservative Party won the most seats by the slimmest of margins, but lost its majority in the House of Commons — an enormous blow for the Prime Minister, who called the election in order to consolidate power.

With all but one of the seats declared, the Conservatives, or “Tories,” had taken 318 seats, which means voters have elected their second hung parliament in less than a decade. The Conservatives announced Friday morning they would enter into a coalition deal with the Democratic Unionist Party (DUP) of Northern Ireland, which won 10 seats.

In a short statement outside her official residence in 10 Downing Street, May said she would form a government “that can provide certainty and lead Britain forward at this critical time for our country.”

The result calls into question May’s future as leader of the party, and the country. But a source within government told TIME May was “safe for the foreseeable future,” and speculated there would be no leadership contest in the current feverish political moment. “Who in their right mind would want to step into those shoes now and land themselves with that Brexit bag of cr*p?”

The result is being billed as one of the biggest political upsets in the country’s history, with the Labour Party of far-left Jeremy Corbyn defying expectations and projected to win 261 seats in Parliament.

Read: U.K. Election Delivers a Hung Parliament. What is That?

The ‘hung parliament’ has some analysts speculating about a second general election, which would further destabilize upcoming Brexit negotiations that are expected to start on June 19.

Back in April, the Prime Minister called the election as polls pointed to a landslide result for the her party. The gamble backfired. On Friday morning, it became clear the Tories lost seats in the south of the country while failing to break into Labour’s heartlands further north.

The setback dashes May’s hopes to strengthen her hand in the upcoming “Brexit” negotiations with the E.U. Brexit Secretary David Davis suggesting to Sky News that the lost majority could amount to the Tories losing their mandate for a “hard Brexit”— where the country would leave both the EU’s single market and its customs union.

Arlene Foster, leader of the DUP, appeared to confirm as such when asked about joining a possible coalition government with the Tories. “No-one wants to see a hard Brexit, what we want to see is a workable plan to leave the European Union. That’s what the national vote was about and therefore we need to get on with that.” Brexit presents a thorny challenge to Northern Ireland, which shares a land border with the Republic of Ireland, which will remain in the EU.

Read: Theresa May Stands Defiant in a Defeat of Her Own Making

Still, the referendum was not the main issue informing Thursday’s vote. “[ Labour] made a really positive offer to an electorate who is fed up with austerity, that has doubts about globalization, and the neo-liberal economic model we have had for so long,” Tim Bale, Professor of Politics at Queen Mary University of London told TIME.

The pound had its worst day of the year so far in reaction, falling by nearly 2% against the dollar to its lowest level in two months.

“For the economy, households and corporates will be concerned by the increased political uncertainty,” said Azad Zangana, senior European Economist at fund manager Schroders in London. “We expect a pull back in household spending and business investment which will exacerbate the slowdown currently being experienced.” The U.K.’s independent Office for Budget Responsibility has already cut its forecast for growth this year to 1.4% from an original 2.2%.